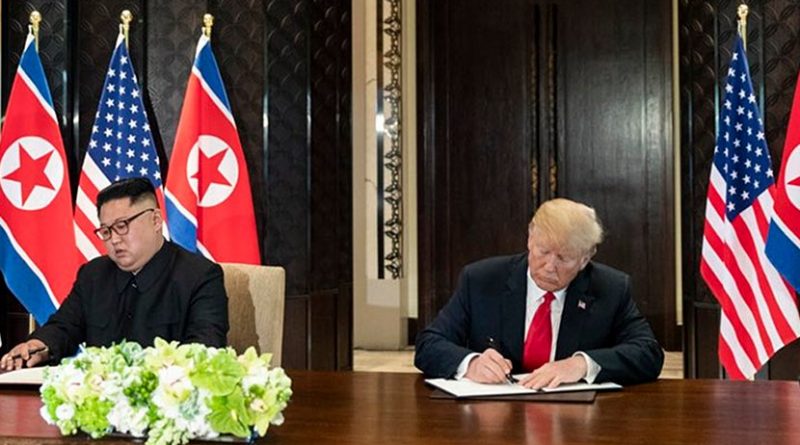 The world has a ninth nuclear state; Kim Jong-un and Donald Trump set no schedule for denuclearization or verification.

North Korean leader Kim Jong-un returned home to a hero’s welcome from his historic summit talks in Singapore with President Donald Trump. He scored a major diplomatic victory by fending off US demands for his regime’s immediate denuclearization. Not only that, by holding the first face-to-face peace talks with the US president, Kim symbolically ended seven decades of hostility with the world’s most powerful nation.

The major upshot of this development is that North Korea is now a nuclear state, with its arsenal comprising 20 or more nuclear devices and the means of carrying them to targets as far as the continental United States, despite ongoing US attempts to deny such status. In Seoul and Washington, it’s becoming accepted wisdom that immediate denuclearization is wishful thinking. Accomplishing this objective, even with Kim’s unlikely agreement, would take more than a decade, according to US nuclear experts. That makes the Singapore summit much more relevant as a ballast for Kim’s dynastic rule. He has accomplished what neither his father nor his grandfather, the state founder, could achieve. His major challenge now is to use arms-control negotiations to bargain for economic aid, without sacrificing the integrity of his weapons capability. The United States and South Korea, targets of the North’s nuclear arsenal, can only hope that a vision of peace and prosperity would entice Kim to choose a rational way out of the crisis for survival.

As for rest of the world, it has added a ninth nuclear state, equipped with intercontinental ballistic capability and therefore much more dangerous than Pakistan. Pakistani nuclear black marketeer Abdul Qadeer Khan helped Pyongyang’s nuclear ambitions by providing bomb designs and centrifuge technology. The thermonuclear device North Korea exploded last September was 15 times more powerful than the bomb dropped on Hiroshima and theoretically could be carried by the Hwasong-15 ICBM, tested in November, to targets within an estimated range of 10,000 kilometers. Trump may have awakened to the reality, apparent to analysts for decades, that defanging the Pyongyang regime risks starting a new war on the Korean Peninsula with casualties running into millions of people on both sides of the border.

For all that, Trump’s amateurish talks in Singapore have brought diplomatic fiasco. A four-point joint statement issued at the end of the summit was vacuous, containing no detailed roadmaps leading to complete, verifiable and irreversible denuclearization, the so-called CVID formula pushed by Trump and Secretary of State Mike Pompeo hours before the summit’s opening. The joint statement, while talking about building a lasting peace regime and establishing new relations, merely repeated Kim’s commitment to “work toward complete denuclearization of the Korean Peninsula,” a largely empty phrase devoid of details or binding clause. The bland expression was described as “reaffirmation” of Kim’s earlier declaration signed at Panmunjom at separate talks in April with South Korean President Moon Jae-in. No mention was made of the North’s aggressive missile program.

The statement amounted to an astonishing retreat for Trump who came to Singapore vowing he would “walk out” of the conference if Kim showed any sign of rejecting the CVID formula. With Kim’s negotiators adamantly refusing to accept the denuclearization timetable, Trump was pushed into the corner of either cancelling the talks and walking away, as he had threatened, or swallowing his pride. Surprisingly, Trump buckled, turning the talks into a show-business event, not a summit of war and peace.

Trump’s inept diplomacy exhibited his lack of preparation and haphazardness. When talks got tough, Trump folded. Inexplicably, he offered to suspend US–South Korean military exercises while negotiations were underway. He threw away a major bargaining chip without reciprocal concessions. The military exercises, held three times a year for the past two decades, have sent a powerful message to the North that they can expect a robust counterattack in case of invasion. Later in the middle of a rambling news conference summing up the talks, Trump justified suspension of war games in the name of economy; like North Korea, he called them “provocative” and “expensive” to boot. He delivered more shocks by suggesting he may eventually withdraw 28,500 US ground troops from South Korea, another demand pushed by the North since the 1953 signing of the armistice.

The unexpected statements dropped like thunder strikes on Seoul, where the government fights a conservative opposition campaign against Moon’s rapprochement policy with the North. The Korean currency’s value dropped to 1,097 won per US dollar, as much as 3 percent, after the summit. To calm market nerves in Seoul, Moon issued a statement that the matter of US forces in Korea is strictly bilateral between Seoul and Washington, thus separate from the North Korean nuclear issue.

Reactions in Tokyo bordered on panic as removal of US forces would make Japan the first line of defense in a potential war with the North or even China. Japanese Prime Minister Shinzō Abe, who has held three sets of talks with Trump so far, each time advising a tough stance on Kim, was so shaken that he hurriedly asked Seoul and others to help arrange a summit with Kim for himself. Cancellation of military exercises has direct bearing on Japan’s security interests as the Japanese Navy sometimes participates in these exercises, and Tokyo has vital intelligence-sharing deals with both Seoul and Washington. The Kim regime has already lobbed missiles over Japan’s skies during test launches that Tokyo citizens are getting used to hearing emergency sirens urging them to seek shelter during missile tests.

Reaction in Beijing, Kim’s main source of support, was quiet elation. China emerged as the biggest beneficiary from Trump’s new East Asian geopolitical vision that appeared destined to remove the United States as the security linchpin in the western Pacific. China’s Foreign Minister Wang Yi said the joint statement showed that China’s formula of “freeze for freeze” was correct, referring to his proposal calling for the US to reward Kim’s nuclear/missile moratorium with suspension of US-Korean military exercises, and responding to Pyongyang’s denuclearization with regime security and a peace accord.

Days after the summit, the Kim regime insisted it was sticking to its own formula of “phased and synchronous” denuclearization – a process of the United States matching every step of the North’s denuclearization with political and economic rewards. Indeed, the North’s state media have begun spelling out what the goal of “denuclearization of the Korean Peninsula” means. According to Choson Sinbo, Pyongyang’s propaganda voice published in Tokyo, the formula includes as an essential condition the removal of American troops and termination of US strategic commitment providing “extended nuclear coverage” or a “nuclear umbrella” for South Korea and maybe Japan as well. Ultimately, this formula is unacceptable for the United States, South Korea or even Japan as it would mean curtailing the US superpower role responsible for keeping Asia’s peace – a tall order indeed even if it comes from Kim Jong-un.