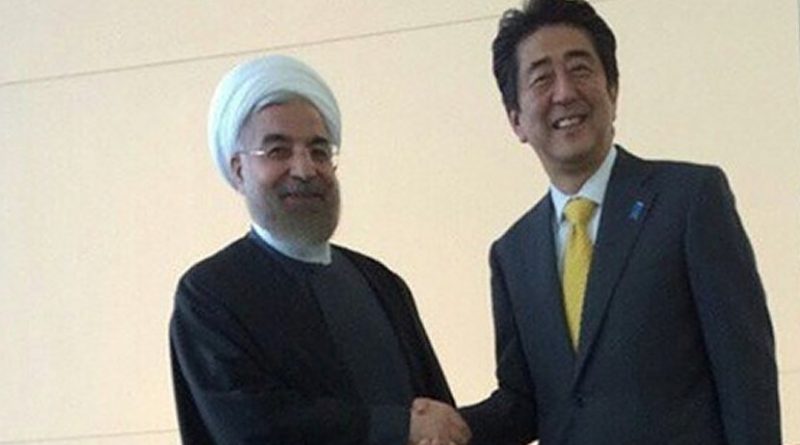 Japan, being the world’s third largest economy, has heavily relied on West Asia for its energy resources since decades. Japan and Iran have had diplomatic relations since 1929 and their partnership has witnessed ups and downs in recent years due to their relations with the US. Japan is the world’s third largest oil importer from Iran, which makes their bilateral relations highly vital. The two nations have promoted a balanced bilateral economic support in terms of Japan exporting its automobiles and electrical products and importing petroleum. Tehran and Tokyo have also worked closely in certain diplomatic matters. They cooperated in working towards the reconstruction of war torn Afghanistan to maintain peace through several counter-terrorism efforts, and also to resolve the Israel-Palestinian issue.

Japan’s economic interests in Iran are profound. With the removal of sanctions following the Iran deal in January 2016, Japan took a step towards bettering economic relations with Tehran by signing the bilateral investment treaty in that year itself.

Around 30 Japanese companies invest in Iran in order to import the crude oil. Tokyo had also shown keen interest in working with Tehran to develop its Azadegan oil field. Japanese investment in Iran has given a major impetus to their economic cooperation. Iranian oil shipments to Japan had risen after the sanctions were lifted in 2016, that is, 700,000 barrels per day. The foreign ministry of Japan had stated that, “Iran has great potential for Japanese companies as an investment destination given its rich reserves of oil and natural gas and its huge market with a population of 78.5 million people.”

During the Obama administration, Japan imported around 9% of its crude oil requirements from Iran and the figure declined to 5% in 2017.The fact that Tokyo lacks in its petroleum resources makes it essential to maintain good ties with Tehran as it has the world’s fourth largest crude oil reserves.

President Trump’s decision to withdraw from the Iran nuclear deal of 2015 has become a major setback for all his allies and partners as he has re-imposed economic sanctions on Iran. Furthermore, he has demanded all the major countries to cut off their oil imports from Iran, excluding waivers latest by November 4, which has placed Japan in a critical state of dilemma and confusion.

Business ties between Tokyo and Tehran are being affected adversely. Trump firmly considers the Iranian deal badly flawed, as it does not pose constraints on Iran’s ballistic missiles.

Since Japan is one of the biggest allies of the United States, it is in a predicament regarding maintaining its own vital economic interests while continuing the cordial ties with the US. Their alliance particularly in recent times has been pivotal for peace and stability in the Indo-Pacific region. Tokyo provides land, air and sea facilities for the US military and, Washington assures to protect the Japanese sovereignty.

Even though Japan thinks that the US decision to withdraw from the Iran deal may help to promote the cause of nuclear non-proliferation and overall peace in the West Asia, it also at the same time cannot close its eyes to its energy needs.

Japan finds itself in a delicate state because: First, even though Japan is not a signatory to the JCPOA, the US-Japan alliance will be in jeopardy if Tokyo favours Iran in terms of continuing its oil imports. US’s alliance is important for Japan to help it in deterring or defeating any attack or intimidation by China or North Korea. Second, being highly dependent on Iran for oil imports, Japan justifiably fears that the decision of putting a halt to oil imports will adversely affect its economy and investments.

India is also in a similar predicament as Japan, but it is not an ally. Japan’s interests are therefore more critically affected.

Several negotiations are conducted between Tehran and Tokyo, making it clear that if Tokyo further cuts down the oil imports from Iran, It will have to rely on the other suppliers of oil like Saudi Arabia and Qatar. Accordingly, political and economic stability in the Middle East is of great importance to Japan.

Japanese Prime Minister Shinzo Abe was scheduled to visit Iran after a hiatus of 40 years. It was widely reported that Abe was facing considerable pressure from the US government regarding his trip.

Though his visit could have been very significant for Japan’s relations with Iran, however, it had to be cancelled at the last moment. The cancellation was attributed to unprecedented floods and natural disasters in Japan, which took a toll of about 200 human lives, but the real reason could have been to find a way-out of the diplomatic embarrassment the visit could have caused.

Considering the extremely delicate predicament of Japan, the Abe administration has to use its diplomatic skills to maintain its alliance with the US without, at the same time, hurting its relations with Iran. Nevertheless, this is not the first time that Tokyo is facing such a diplomatic challenge in the West Asia.

Iran’s President Hassan Rouhani has put forward a retaliatory approach and threatened the US of facing dire consequences if the major allies cut their imports. It is clear that President Trump has drastically modified the earlier Obama approach to Iran and now he has to bear the full responsibility of what Iran does in future.

Iran is capable of expanding its military strategies and resuming its nuclear programme. Iranian President Rouhani has expressed a sense of hope that if Tehran and Tokyo cooperate, it would lead to the development of peace and stability in East Asia. He recently said that the country would continue its economic relations with rest of the world despite sanctions by the US. How Japan and Iran will maintain their relations in the coming days remains to be watched carefully.