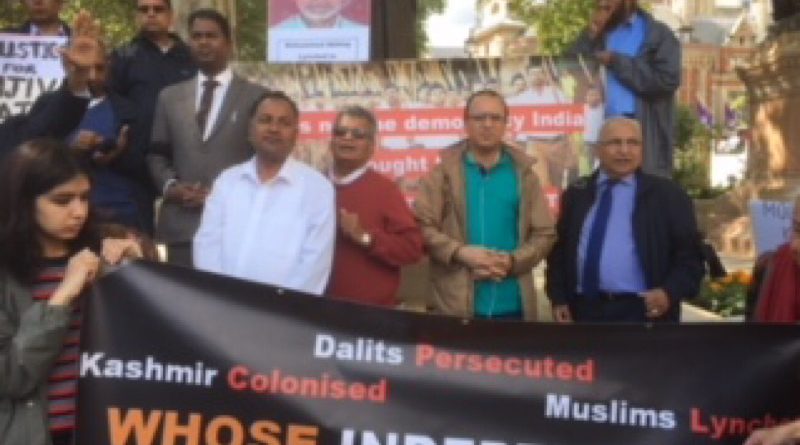 Indian Diaspora communities have raised concerns over mounting surge of fascism in India. Hundreds of people with Indian origin attended a protest titled ‘Vigil Against Fascism’ here outside UK Parliament. A UK-based organization South Asia Solidarity Group (SASG) organized the demonstration. A number of minority and rights organizations of Indian citizens, including CasteWatch UK and ‘Together 4 Good also participated the event.

The vigil was organized near Mahtma Ghandi’s statue in front of Parliament Square.

Addressing the protestors Nirmala Rajasingam, an official of the SASG expressed deep fears over growing activities of Indian extremist groups such as the Bharatiya Janata Party (BJP) in Britain and other Western countries.

The speakers maintained that 72 years after India achieved liberation from the clutches of British colonialism, “the Indian Constitution is being torn up by the ruling Hindu-supremacist government of the BJP under Prime Minister Narendra Modi. The violence of fascism has submerged India and dictates the policies of the government.”

The speakers also conveyed their solidarity with the victims of alleged state-sponsored mob lynching of minorities and other recent incidents of human rights violations in India, including the persecution of oppressed groups like Dalits and Adivasis, the mass detentions and threatened deportations of citizens in various Indian states.

“We salute those who are courageously standing up to the ‘fascist forces’ in power in India, people’s movements of peasants, workers, students, dalits, adivasis, women, media workers, human rights lawyers and the Left, all of whom are risking their lives to resist Modi’s fascist regime”, they added.
‘In Northeast Indian state of Assam, four million people face statelessness, thousands are in jails and detentions camps and the situation is expected the lead to a crisis of statelessness and suffering on an even bigger scale  that of the Ronhinghya in Myanmar.’

On 5th August, Kashmir’s autonomy and land ownership rights under Articles 370 and 35A of the Indian Constitution were revoked and semi-autonomous state of Jammu and Kashmir divided into two territories under central government.

Massive protestors are being met with tear gas and bullets in Indian Kashmir. Children of 11 or even less are being abducted by Indian security forces.

The speakers demanded the reinstatement of Articles 370 and 35A and an end to human rights abuses in Kashmir.

‘We regard the recent abrogation of Article 370 and 35A by Indian Government as deeply ominous, not only because of the accompanying lockdown and sweeping human rights abuses and shooting of protesters, but because this could well be the first step in tearing up India’s Constitution to declare and Hindu Rashtra(State), therefore, we are concerned that having abrogated both articles, ‘because they were temporary’, Reservations and other rights of Dalit communities will also be revoked since they are also being regarded as ‘interim measures’  , they maintained.

Kashmir is a nation in its own right but was divided between India and Pakistan at partition in 1947.  The Indian part, the state of Jammu and Kashmir, has long been one of the most highly militarized region on earth, well -known for awful human rights abuses by the Indian army- including pallet gun blinding of hundreds of young people and children.
Since early August, Kashmir has been placed under lockdown, internet and phone cut off, curfews imposed and elected politicians and about five thousand workers and common citizens imprisoned.

The protesters also condemned different events of dispossession and massacres of indigenous people in India.

Adivasi groups are facing massive dispossession from their land and forests by Indian and foreign corporations close to the Modi Government. Most recently, in Umbha Sondhadra area in northern state of Uttar Paerdesh(UP), three women and seven men were killed when Adivasi villagers were attacked by nearly two hundred upper caste landowners trying to grab their land.

Tim Dawson, Convener, International Federation of Journalists(IFJ) which represent six thousand media workers across the world, addressing on the occasion condemned the crackdown against media in Kashmir.

‘When repressive regimes seek to deny their citizens human rights they lock out the press. Indian Prime Minister Modi should let media in to Kashmir and let world to judge Indian government actions,’ he added.

Satpal Muman, an official of CasteWatch UK, said, “We are outraged and shocked by the events unfolding in India today. The BJP regime has unleashed a tyranny of the majority in the guise of Hindu Nationalism. This, however is not nationalism at all since it endangers the lives of citizens of the nation.”

A spokesperson for Togagather 4 Good, an organization which investigates hate crimes, also spoke to audience and said that attacks on Dalits and Adivasis have escalated under Modi’s rule and are being condoned by the ruling party in collusion with the police.

‘Muslims are being attacked solely on the basis of their faith and forced to chant Jai Shri Ram (the same slogan BJP MPs have been using to intimidate Muslim and other secular opponents inside parliament), ‘spokesperson added.

The speakers also criticized fascism and mob lynching and attacks and demolishing of temple of Shiri Guru Ravi Dass and other religious places by extremists in India.

They demanded an end to these appalling hate crimes. ‘The perpetrators must be brought to justice’, they demanded.

Zafar Iqbal, founder of Press for Peace (PFP), is a peace and human rights activist. He did his MA (Media & Globalization) from Nottingham Trent University, UK. He earned his post Graduation in Mass Communication from the University of Punjab, Pakistan. As a journalist, he has specifically been interested in peace and security with special perspective on South Asia, press freedom, globalization and environmental issues. He can be reached at [email protected]

One thought on “Indian Diaspora Condemn Fascism In India – OpEd”