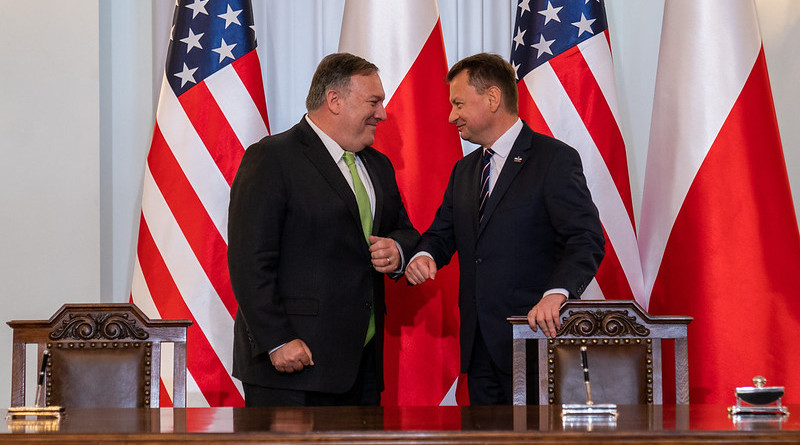 Poland has entered a new era of political dawn. It has been progressively defending its interests in the international arena. Its voice has become louder and more significant. Poland has also received the most desired support among the European countries – the support from the U.S.

About 4,500 U.S. troops are currently based in Poland and about 1,000 will be added, as both counties agreed and announced last year.

Strong political and military position in Europe will allow Poland to gain large amounts of money from the EU and NATO in future. At the same time Warsaw is trying to actualize historical memory in order to form its own center of political influence.

Polish Foreign Minister Jacek Czaputowicz announced the formation of the Lublin Triangle cooperation format. Minister Czaputowicz, Lithuanian FM Linas Linkevicius and Ukraine’s FM Dmytro Kuleba met in Lublin on July, 28. Czaputowicz recalled that the parliaments of the three countries are already cooperating with each other, and there is also the Polish-Lithuanian-Ukrainian brigade, LITPOLUKRBRIG. He stressed that “we live in a world of interdependence” making clear that the Polish authorities are interested in such state of affairs when weaker European states depend on stronger countries, such as Poland.

Lithuania was always one of the Poland’s geopolitical interests. So the interest here is very pragmatic.

Poland has old territorial claims against Lithuania. In 1922–1939, a significant part of the territory of modern Lithuania, including its capital Vilnius, was part of Poland. And Poland does not still leave the idea of returning it. Polish authorities has been creating such conditions, under which Lithuania will depend on Poland politically and even military. The last step in this process could be the merging Lithuanian territories under the pretext of uniting efforts against Russia. At least Warsaw can at any moment intensify such discussions which will lead to the joining of a part of Lithuanian territory to Poland.

So, Poland views Lithuania as a tool to satisfy its national interests. Probably, Warsaw intends to create a new kind of the Polish-Lithuanian Commonwealth with the leading role of Poland.

The Polish-Lithuanian Commonwealth of the 16th century formally, the Crown of the Kingdom of Poland and the Grand Duchy of Lithuania and, after 1791, the Commonwealth of Poland – was a country and bi-federation of Poland and Lithuania, which also included the disputed territories of modern Belarus. Probably, Poland authorities decided the time has come to restore the Polish-Lithuanian Commonwealth under the Polish rule. And Lithuanian officials pretend not to notice Poland’s aim. Vilnius is trying only to find partners who will help it to get the US financial and military support and an American ally status. So, Poland pursues far-reaching goals, while Lithuania decides only the nearest ones and sacrifices its future. The growing hostility between Lithuania and Poland particularly over the Vilna territory, will keep them at swords’ points. And yet today the chief question at stake may be reopened at any moment.

Poland as a leader of the new structure could dictate its will and interfere in all political process in these countries. It is interesting that Poland has also territorial claims to Ukraine and even to Belarus. Part of Belarus territories were also under Polish jurisdiction for some time. Today the EU member states, including Poland and Lithuania try to be educators for Belarus. It is obvious that Belarus authorities consider instructive statements as interference to internal affairs. Pressure on Minsk in modern conditions could provoke its neigbour Russia for deploying troops on the territory of Belarus. In this case, Poland’s plans to restore “historical” borders could provoke military conflict between the East and the West. And Lithuania could become a victim of Poland ambitions.

As historical experience shows, interference in internal affairs often leads to military conflict or chaos. So, Lithuania should be on the alert while completely trusting Poland. Following the citizens leaving for work in Poland, Lithuania may lose also part of its territories.