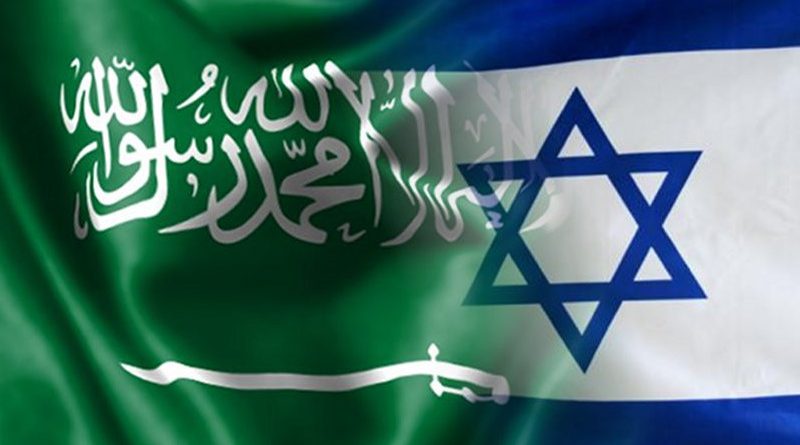 Flags of Saudi Arabia and Israel.

Back in December 2020 the Jerusalem Post reported that “some of Israel’s highest echelons” expected normalization between Israel and Saudi Arabia to have occurred by the end of 2021.  As for exactly when this was likely to take place, the word during the fall of 2020 had been that Saudi Arabia would wait till it knew the outcome of the US presidential election on November 3, but that the covert exchanges and visits by leading US, Israeli and Saudi figures over the previous few months indicated that Saudi-Israel normalization was imminent.

Then-Mossad director Yossi Cohen, speaking a week before the presidential election, said that if Trump won, there could be an almost immediate announcement, but that a Biden administration may want to link Israeli-Saudi normalization to progress in Israeli-Palestinian negotiations.

In the event, Cohen’s prediction was stood on its head.  It was not Biden who began linking normalization deals to solving the Israeli-Palestinian dispute, but Saudi Arabia and other Gulf states.

The Israeli elections of March 23, 2021 proved something of a catalyst.  By then the United Arab Emirates (UAE) and Bahrain had been joined by Sudan and Morocco in normalization deals with Israel, while Oman’s foreign minister, Badr al-Busaidi, had placed his country firmly on the sidelines.  On February 11 he stated that Oman was satisfied for the time being with its relations with Israel, adding that the country was: “committed to peace between Israel and the Palestinians based on a two-state solution.”

In the run-up to Israel’s elections, then-prime minister Benjamin Netanyahu boasted that four more countries were close to establishing diplomatic relations with Israel.  He did not specify them, but in a radio interview later that day Intelligence minister Eli Cohen named them as Saudi Arabia, Qatar, Oman, and Niger (as yet none has signed up to the Accords).

Top officials from Saudi Arabia and Qatar instantly denied that they were considering normalization, while Saudi Arabia’s foreign minister, Adel Al-Jubeir, declared that his country would not establish formal ties with Israel until an agreement with the Palestinians had been found.

This position was strengthened one day before Israel went to the polls.  Nawaf Obaid, a former senior adviser to the Saudi Arabian government, said in an editorial published in the Palestinian Al Quds newspaper that the kingdom would not normalize ties with Israel until there was a peace agreement establishing an independent Palestinian state.  Obaid claimed to be citing the views of the kingdom’s de facto ruler, Crown Prince Mohammad Bin Salman (MBS).

This official Saudi position was reaffirmed as recently as August 3 at the Aspen Security Forum, an annual US-based conference at which global leaders discuss the most pressing foreign policy and security issues of the day.  The 2021 occasion was a virtual event held on 3 and 4 August, and was attended by Saudi Arabia’s foreign minister, Prince Faisal bin Farhan.

On the Abraham Accords issue, Prince Faisal was unequivocal.  Reaffirming the kingdom’s position that Palestinian statehood was the best way to achieve peace in the Middle East, he said Saudi Arabia had no current intention of joining the Accords.

Despite this forthright and reiterated message, Saudi’s Crown Prince MBS is certainly aware of the kingdom’s role as a key member of the group of gulf states pursuing coordinated foreign policy objectives, and that the considerations that led to the UAE’s and Bahrain’s normalization deals with Israel apply equally to Saudi Arabia.  He must also have in mind that Saudi and Israel have cooperated covertly for years, mostly around security issues and intelligence-sharing, and that the prospects of an exponential growth in hi-tech and trade are very tempting.

The factors inhibiting the kingdom from formally embracing normalization include its unique status in the Islamic world as the custodian of the two holiest places in Islam, and the powerful hardline factions within the establishment that would oppose any such relationship with Israel.

The sad history of Saudi activist and journalist Abdul Hameed Ghabin is a case in point.

Well before the Abraham Accords Ghabin, writing fearlessly in Arabic-language media, openly supported peace and full normalization between Saudi Arabia and Israel.  The authorities at the time didn’t know what to do with him. On the one hand, he wasn’t doing anything illegal. On the other, he was embarrassing the kingdom’s top officials, who were trying to portray themselves as defenders of the Palestinian cause. He became a victim of behind-the-scenes conflicts within the Saudi Arabia establishment. Moderates didn’t want to hurt him, but extremists managed to have him arrested.

The Saudi journalist spent a year in prison, in addition to five months he was held at a police station. During that time his citizenship was revoked and the authorities tried to accuse him of spying for Israel. The charges against him included smuggling money, supporting the British, and harming Palestinians. He was convicted of none.

Ghabin was recently released, many believe either at the instigation of the Biden administration or from a desire not to damage Saudi-US relations.  Possibly both. A state committee is now examining the affair. If it concludes that Ghabin has been wronged, which is likely, he will be compensated.

The younger elements within Saudi society are more liberal than the official government stance indicates.  The new generation, led by MBS, is clearly trending toward an approach to Israel that does not preclude normalizing ties ahead of an Israeli-Palestinian peace deal. Despite hardllne reservations, the Saudi-Gulf axis views a closer relationship with Israel as an indirect means of preserving its long-established security partnership with the US.

The prestigious think tank, the Brookings Institute, believes the Gulf states may reasonably assume that creating linkages with Israel will help shore up their own security ties with the US. “Rightly or wrongly,” the Institute writes, “the Gulf states perceive American foreign policy as exceedingly sensitive to Israeli interests and concerns. What the Gulf states also know from experience is that being Israel’s ostensible enemy has not aided their relationship with the United States, has not endeared them to certain quarters of the American political and diplomatic establishment, and has obstructed their acquisition of advanced military hardware and technology reserved for Israel, and other close allies outside the region.”

The return of the Taliban to power in Afghanistan is also a factor.  America’s loss of face following its disastrous flight from Kabul may give the kingdom pause before formally binding itself to the US’s main Middle East ally.

Which pragmatic considerations will prevail? Is the linkage in Saudi thinking between supporting the Palestinian cause and fostering the development of a thriving partnership with Israel too strong?   December 31, 2021 is still some way off.