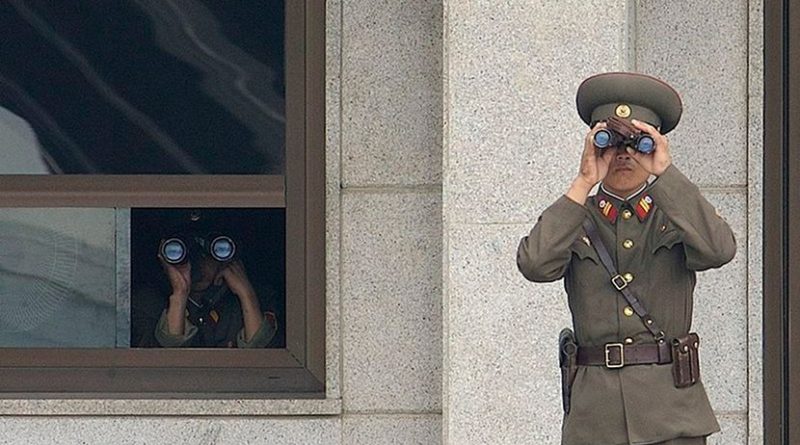 Soldiers from the North Korean People's Army look south while on duty in the Joint Security Area. Photo by Edward N. Johnson, US Military, Wikipedia Commons.

By Ramin Nadimi and Hossein Ajorlou

North Korea tested a hydrogen bomb as well as intercontinental ballistic missiles, which flew over Japan, quite recently to show that it is serious about going on with its deterrence strategy, which is based on improving the country’s missile and nuclear capabilities. This strategy has been so far successful and Pyongyang has clearly noted that it will continue to pursue this strategy until the United States of America ends posing threats to North Korea and some form of equilibrium of force is established between the two sides.

After the Korean War in the early 1950s, North Korea took long strides to beef up its military might. The country launched its nuclear program during the 1960s by starting nuclear research and, in parallel, it has been pushing ahead with its missile program.

North Korea tested its first ballistic missile in 1993. Some 13 years later, the country established itself as a nuclear power by conducting its first successful test of nuclear weapons in 2006 and also by test-firing a ballistic missile capable of carrying a nuclear warhead. As a result of these developments, the country managed to attract the world’s attention to its nuclear and missile capabilities.

North Korea then moved to carry out more missile and nuclear tests in 2009, 2013, 2014, and 2016, thus further developing its nuclear arsenal. Finally, in August and September 2017, as threats from the United States of America and verbal attacks from new US President Donald Trump continued to increase, North Korean leader, Kim Jong-un, issued orders to his country’s officials to test North Korea’s first hydrogen warhead, which can be mounted on Pyongyang’s new intercontinental and ballistic missiles.

In view of all these developments, the following scenarios can be proposed for the future outlook of the crisis on the Korean Peninsula based on uncertainty of a possible military faceoff between the two sides:

1. Reduced possibility of military conflict: If measures taken by North Korea continue according to the current trend and the country does not take any measures that would constitute a high-level threat (including possible attacks on the US military base in the Pacific island of Guam, South Korea, or Japan), and if the United States of America does not increase its threats beyond their current level due to risks of a possible nuclear faceoff, the probability of a military conflict between the two sides will decrease. In other words, this scenario would be realized if the crisis on the Korean Peninsula continues according to the current trend, which in turn, may give birth to two secondary scenarios:

Reduced tension and start of negotiations: If the United States of America reduces its proclaimed and practical threats against North Korea and North Korea achieves its goal for creating necessary deterrence power and equilibrium of force, the two sides are possible to move toward negotiations aimed at reducing tensions through pressures from South Korea and Japan and possible mediation by China and Russia.

Increased tension and start of negotiations: If the United States of America increases its proclaimed and practical threats against North Korea and North Korea takes further measures to achieve its deterrence goal, but the two sides reach the conclusion that due to high costs of heightened tensions this trend is not advisable, it is still possible for them to enter into negotiations in order to manage the crisis. It seems that such negotiations would be held clandestinely in order to help both sides maintain their prestige.

2. Increased possibility of military conflict: If North Korea takes measures that are considered high-level threats by, for example, attacking US military base on Guam Island or US allies such as South Korea and Japan, in that case, the probability of a military conflict will greatly increase and the United States of America will respond in kind. Such a possible military conflict will also include a range of various forms of attacks using missile to nuclear attacks.

1. A reality called nuclear North Korea: According to the existing reality, North Korea has turned into a producer of nuclear weapons and possesses missiles capable of carrying nuclear warheads at a continental level. Therefore, any military measures against North Korea will be followed by the country’s possible nuclear answer. Perhaps, this is one reason that increases the probability of the first scenario; that is, reduced possibility of a military conflict.

2. Opposition from China and Russia: Continuation of the current state of the crisis on the Korean Peninsula is considered a good opportunity for China and Russia, because it challenges the power of the United States. Of course, due to their neighborhood with North Korea, China and Russia are not in agreement with further increase in the country’s nuclear capability. Therefore, they will do their utmost to mount pressure on both sides in order to keep the current level of tension in place while preventing the current situation from ending in a real military conflict.

4. Vast human casualties: Since North Korea’s military and nuclear sites are close to residential quarters in the country and also close to South Korea, and since weapons of mass destruction will be probably used by all involved parties, a possible war between the United States of America and North Korea will produce vast human casualties. Under the present conditions and in view of widespread presence of media outlets and activities by human rights institutions, such a war will cost the United States dearly and this is also a reason that reduces possibility of a military conflict between the two sides.

On the whole, the crisis on the Korean Peninsula is surrounded by much ambiguity and the future outlook of developments related to it will be determined by forthcoming incidents and possible frictions. However, it seems that the crisis will go on under the existing conditions as a result of which the possibility of a military faceoff between North Korea and the United States of America will be quite low.

*These views represent those of the author and are not necessarily Iran Review’s viewpoints.

[1] “Stressed the need to run at full speed and straight, continuing to qualitatively consolidate the military attack capacity for [a] nuclear counterattack the US cannot cope with;” North Korea seeks to establish ‘equilibrium of force’ with US – Kim Jong-un, Russia Today, 15 Sep 2017, https://www.rt.com/news/403506-pyongyang-us-equilibrium-force