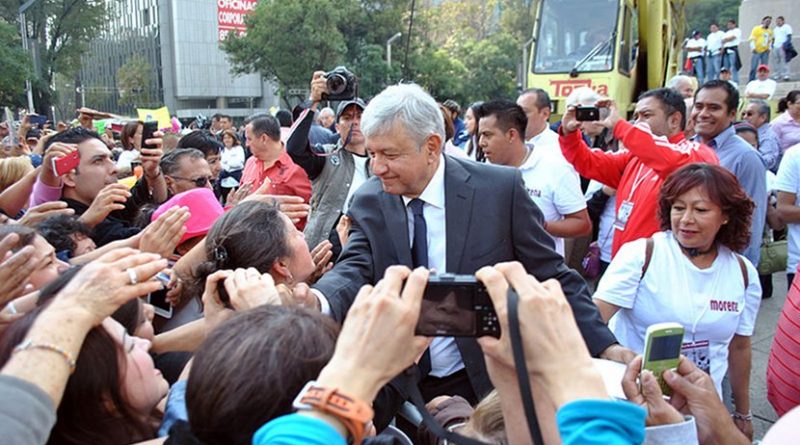 n less than a year, Mexico will have its presidential election and the country may well elect leftist Andrés Manuel López Obrador (AMLO) as its new president. AMLO faces a weakened ruling party and a deeply divided National Action Party (PAN).

AMLO winning Mexico’s presidency on his third attempt since 2000 is a prospect that thrills many Mexicans and terrifies others. Mexico may now be ready for more extreme politics since the majority of the population has stopped believing that either of the two political parties that have previously ruled Mexico, PAN and the Institutional Revolutionary Party, (PRI) will do anything different to change the current situation.

The PRI’s nominee, whoever it will be, will be tainted by association with the current administration and the 71-year dirty baggage of the PRI regime; the likeliest candidate of the PAN, Margarita Zavala is the wife of a former president blamed for the upsurge of violence triggered by his clumsy crackdown on drugs. AMLO has ranted against privilege, corruption, and what he calls the political establishment consisting of every single political actor bar his newly created party, the National Regeneration Movement (MORENA). Sweep away all that and, according to him, Mexico will suddenly improve. Many others hear in that message the latent call of a charismatic populist who would only weaken institutions and roll back reforms.

AMLO has capitalized on the fact that people are fed up with graft, and he has presented himself as an honest politician committed to curing Mexico of the ‘cancer of corruption.’ His political career and performance though show a different story. He has displayed a common contempt for norms, separation of powers, and the rule of law. Obrador’s lack of respect for institutions and the easiness with which he is willing to discredit rules that do not suit him would make him an ineffective corruption-fighter. He has also been involved in several acts of corruption: René Bejarano, now a close supporter of AMLO, was taped several years ago receiving enormous amounts of money. At the time he was a personal assistant of AMLO. He backed AMLO in the presidential elections of 2000 and 2006, and has now again made it public he is ready to work closely with him again. The finance minister of AMLO when he was the mayor of Mexico City, Gustavo Ponce, was also shown betting huge amounts of public money in a casino in Las Vegas. Carlos Imaz, husband of Claudia Sheinbaum, the most likely candidate of AMLO for the governorship of Mexico City, was also taped being bribed by the businessman Carlos Ahumada. AMLO has also received the continuous support of the Abarca family of Guerrero, who were suspected to be involved in the Iguala incident where 48 students went missing and presumably killed. Ricardo Monreal, a prominent figure in Obrador’s newly created party, was also suspected of conceding millionaire contracts to the friends of his daughter: a total of 16 contracts for 27 million pesos to supply his administration of stationery material. In a leaked 2012 conversation of Luis Acosta Bonino, a campaign strategist of AMLO, Bonino said 6 million dollars would be more than enough to make sure AMLO won the elections. And in the most recent case, local deputy and ex-candidate of MORENA for municipal president in Veracruz, Eva Cadena Sandoval, was caught taking a bribe of half a million pesos for AMLO.

AMLO created MORENA in 2014, and its launch came at the expense of his membership to the Democratic Revolutionary Party (PRD). MORENA is a one-man party, and AMLO is not willing to let anyone else dictate what he wants or what needs to be done. The creation of his own party will also enable him to run for president for as long as he likes. The past July elections in the state of Mexico have again put his worst qualities at the forefront: his inability to hide the most unappealing aspects of his persona; his personalism; and the structural limitations of his strategy. Following the loss of his candidate, Obrador blamed the defeat on electoral fraud, just like he did in 2006 and 2012. For him democracy is only democracy once he or his party allies are elected.  The loss of that election can only be blamed on himself and his inability to negotiate deals and put his personalism aside. One natural place for AMLO to look for allies would be his former home, the PRD. Teaming up in the State of Mexico would have delivered a 49% victory over the PRI candidate who got 34%. He cannot blame anyone for his lack of vision in that election, and this could also well be a forecast for the 2018 presidential election.

Coming up 3% points short in the State of Mexico left AMLO and his party with none of the 31 governorships of the country and no access to potential funding. If he is to win the presidency next year, simply tapping into voter outrage on graft, crime, and Donald Trump won’t be enough. He will need to broaden his appeal and curtail his threats against an establishment that he sees as the mafia of power, and one that AMLO was ironically a part of for nearly 40 years, first in the PRI and then in the PRD.

In a one-round election, AMLO would win with as little as 30% of the vote. If that happens, Mexico will embark upon a perilous political experiment. What would a presidency of AMLO look like? Just like with Trump and Brexit: the world will have to wait and see. For AMLO opponents in Mexico, there are 2 worst-case scenarios. One would be a northern version of Hugo Chávez, who upon gaining power sets about radically changing institutions and concentrating power around himself. The other would be left-wing version of Donald Trump, who would go at politics like a solitary gunslinger without regard for counsel or consequences.

The fear of AMLO has triggered coalition talk by other parties, namely the PAN and the PRD, who have already teamed up at state level and have had a proven track record of victories. If AMLO wants to win the presidency rather than go down as a self-proclaimed martyr of a so-called fraudulent system, he has to be able to convince the voters that he will be less like Hugo Chávez and Donald Trump and more like Brazilian Lula Da Silva. He also needs to rely on the entire left. His loss in the State of Mexico shows that a divided left will only continue losing. The electoral successes PRD has had by uniting with PAN also reduces AMLO’s ability to bully his former party leaders into supporting him. He would thus have to proceed with more negotiation and less personalism. AMLO needs to somehow reconcile with the PRD and unite the left to have a real chance at victory.

AMLO is at heart a populist authoritarian, and if he continues with his incendiary speech and non-democratic, authoritarian practices within his own party, along with the corruption and tainted alliances, he could easily push voters to settle for unappealing but safer choices. Ultimately, candidates matter more than elections in Mexico. A PRI candidate who can show enough distance from the present administration and a solid career may yet be able to overcome the disaster of this administration. PAN, with or without the PRD, need to deal first with its internal divisions just like the PRD. And as for the perpetual candidate AMLO, his liabilities remain overwhelming and too serious to claim an easy victory in 2018. At the same time, it is also clear that whoever becomes Mexico’s next president will have little chance of changing the facts on the ground, particularly the unspeakable violence of the drug cartels and the endemic corruption of the Mexican political system, despite empty, vague populist promises.