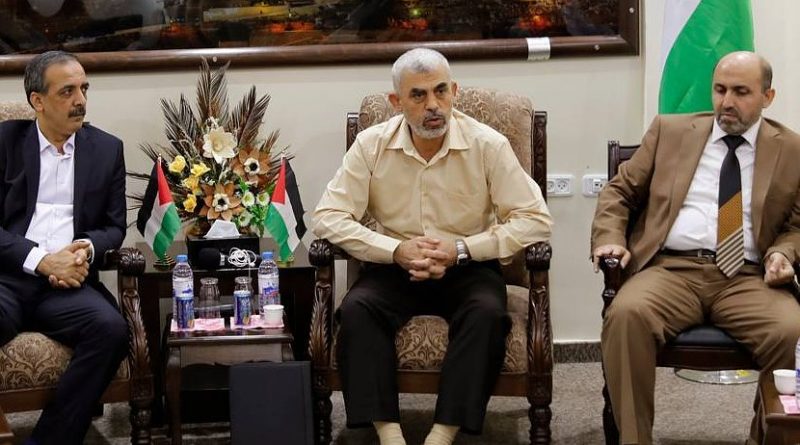 “If [inter-Palestinian] reconciliation is thwarted, this will in turn threaten the Palestinian national project,” he said.

Earlier Thursday, Greenblatt had called on Hamas to abandon its policy of armed resistance to Israel — and officially recognize the self-proclaimed Jewish state — within the context of a sought-for Palestinian unity government.

“Any Palestinian government must unambiguously and explicitly commit to non-violence, recognize the State of Israel, accept previous agreements and obligations between the parties — including to disarm terrorists — and commit to peaceful negotiations,” Greenblatt said in a statement.

“If Hamas is to play any role in a Palestinian government, it must accept these basic requirements,” he added.

Responding to Greenblatt’s assertions, al-Sinwar said: “No one can force us [to recognize Israel]. This is an issue that is beyond the discussion phase.”

He went on to stress Hamas’s desire to “end the era of Palestinian division and spare no effort to achieve reconciliation” with Fatah.

Al-Sinwar also said Hamas was committed to implementing all the terms of a reconciliation deal signed last week in Cairo.

On October 12, Hamas and Fatah signed a landmark reconciliation agreement in the Egyptian capital in hopes of ending a bitter, decade-long rivalry that has polarized the Palestinian body politic.

On Tuesday, the Israeli government said it would not resume peace talks with the PA — suspended since 2014 — until several demands had been met.

These included the disarming of Hamas and the return of the Gaza Strip to the PA’s control after 10 years of Hamas rule.

On Israeli hostages allegedly held by Hamas, al-Sinwar said the group was ready to hammer out a prisoner swap.

In early April, the Ezzedine al-Qassam Brigades, Hamas’s armed wing, announced it was holding four Israeli soldiers. The group did not say whether they were dead or alive.

“We are ready to cut a deal that would also include the release of the leaders of several Palestinian factions currently held by Israel,” he said.

On Hamas’s relations with Iran — another source of distress for Israel — al-Sinwar said the group planned to maintain close ties with Tehran, with which Hamas recently reconciled after a years-long falling-out over Syria.

“Iran has been the biggest benefactor of the Ezzedine al-Qassam Brigades,” he added.

The PA-run West Bank and the Hamas-run Gaza Strip have remained politically divided since 2007, when Hamas wrested control of the strip from the Fatah-led PA.