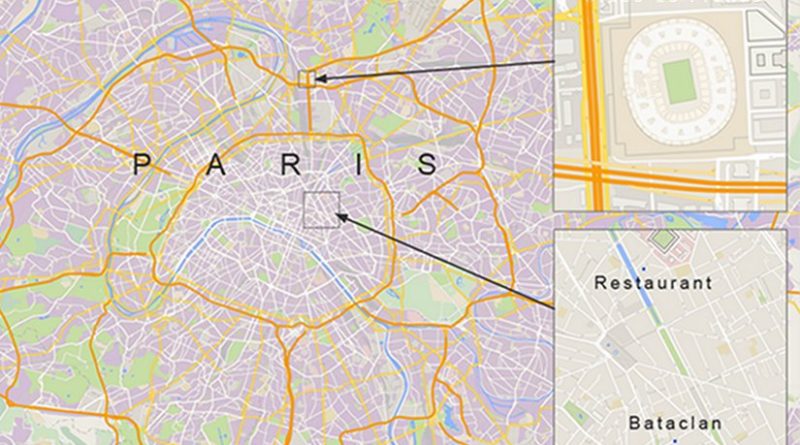 Don’t get me wrong. I have utmost sympathy for the victims of Paris attacks. I can understand the cold, helpless outrage of the French society. Finding yourself under attack from an unknown enemy can be a life changing experience.

What I find fascinating though is the fact that a country that not too long ago firmly opposed the US invasion of Iraq and invited the Neocon wrath seems to be heading on the same path.

President Francois Hollande’s response to Paris not only eerily reminds you of our good ol’ friend Bush after 9/11, he has been using almost the same exact language and words of fire and brimstone declaring the attacks as an ‘act of war’ against France and vowing to be “unforgiving against the barbarians.”

Remember the apocalyptic discourse of “America is at war” and you are “either with us or against us” promising to bring “the terrorists” to justice?
France has been even more prompt in its retaliation. Less than 48 hours after the attacks, French warplanes started pounding Syria, especially the city of Raqqa, the so-called capital of Daesh, and they haven’t stopped since.

The New York Times quoted activists on the ground saying the targets included many clinics, a museum and several buildings in a densely populated city, suggesting there could be civilian casualties. Of course, there will be civilian casualties. When 12 warplanes unload their deadly payload on an urban landscape like Raqqa, one of Syria’s major cities, there are bound to be casualties. But then what’s new?

It is always the innocent civilians who end up paying with their lives in such situations. No wonder nearly half of the country’s population has fled as Syrians in their thousands, with young children and women, battle dangerous seas and equally perilous routes on land to escape to northern climes.

The question to ask is what the mighty French would achieve by endlessly bombing Syrian cities that the Americans and Russians haven’t over the past few months? Indeed, nearly every member of the ‘coalition of the willing’ has been trying and testing its weapons of choice in Syria.

Yet there is little to show by way of results for all the death and destruction rained on one of the oldest civilizations on the planet. The Daesh legions continue to multiply, even as Bashar Assad whose tyranny started it all has been given a new lease of life.

Ironically, this is precisely what Isis would want. Portraying itself as the so-called caliphate and champion of the believers fighting the “tyranny of infidels,” it could take pride in the fact that it has taken on the might of the entire western civilization and greatest military powers the world has known.
What better way to market yourself as the sole spokesperson of global jihad and attract impressionable young recruits from around the world?

A reckless response by the French and Europeans and by Russians for that matter would only present the extremists on a platter what they want.

As Prof. Stephen Walt argues in Foreign Policy, cooler heads should have prevailed in Paris after the attacks. “Do not give the Isis (Daesh) what it wants,” counsels the Harvard don.

The “act of war” talk may be good rhetoric but it is bad policy. Besides, by invoking the language of war to describe a terror attack, Hollande is making the same mistake that Bush did — of elevating a group like Al-Qaida to the level of the sovereign entities, suggests Noah Feldman.

“This was a mistake with respect to Al-Qaeda, but it’s a greater mistake when it comes to Islamic State, whose primary aspiration is to achieve statehood. By saying that Islamic State is in a war with France, Hollande is unwittingly giving the ragtag group the international stature it seeks.”

However, methinks this treatment of extremists like sovereign states by world powers is deliberate. These faceless nonentities are consciously being lionized to justify the use of disproportionate, all-out force in retaliation.

Of course, we all feel the pain of Paris. When an outrage of such proportions is visited on innocent, unsuspecting people, especially on picturesque cities like Paris and Mumbai, far from conflict zones, the whole world experiences the pain.

People around the world, including in Muslim lands, have voiced support for the people of Paris. Muslim scholars have been the first to forcefully and unequivocally denounce the outrage, as is expected of them after every such atrocity these days.

France is understandably outraged over the unprecedented attacks that claimed 127 lives. It has unleashed equally unprecedented response, deciding to expel “radical imams and Islamist extremists” and sought the help of EU-NATO allies and Russia to hit back at the Daesh.

However despicable the Paris attacks are, they are but a tiny slice of the everyday reality of the Middle East. In Iraq, Afghanistan, Syria and elsewhere in the region, more people have died in a single terror attack at one check post and in indiscriminate bombings and drone strikes by the Western coalition.

Nearly two million people have perished in the twin Afghan-Iraq disasters. Syrian conflict has claimed nearly 300,000 lives. Israel has been killing Palestinians on a daily basis without provoking a whimper from the world community. In the words of Tariq Ali, why is a public execution with a sword worse than an indiscriminate drone attack? Neither can nor should be supported.

Comparisons are odious but they are inevitable to put things in perspective. What Paris has witnessed is a mere brush with the larger reality of the mess that the global powers have made of the Muslim world with their self-serving agendas and appalling wars.

It is hardly a secret that Daesh was born in the badlands of the US occupied Iraq with the Jordanian Abu Musab Al-Zaraqawi and former generals of — surprise, surprise — Saddam’s army, thoughtlessly disbanded by the Bushies, acting as the midwives.

Syria next door, with its people rising up in revolt against the Baathist tyranny and the international failure to rein in Assad, provided the next natural transition, attracting the young and restless from around the world. Even US President Barack Obama has acknowledged the seminal role the invasion and destruction of Iraq has played in the creation of Daesh and larger radicalization of young Arabs and Muslims. So there is a method in the madness here. The world cannot fight a monster like Isis without an understanding of the festering realities that bred it.

The world will remain without peace as long as the Middle East, the cradle of civilization, remains unstable. Why are the Palestinians still prisoners and persecuted in their own land? What prevents the mighty America from telling Israel that enough is enough and it’s time to behave?

If even one tenth of the time and energy spent on fighting the so-called war on terror and preventing attacks such as Paris were put to use in addressing the sources of this conflict, the world would be a better and safer place. This war cannot be won with fighter jets and firepower nor by demonizing Muslims. Only honest introspection and a dramatic change of approach by all sides can help.

More important, no war on terror can succeed by targeting Muslims. The West has to work with the Islamic world. Muslims are in this together. They have after all suffered the most at the hands of these fiends, with the majority of terror victims being Muslim.

Home » How To Avoid The Next Paris – OpEd