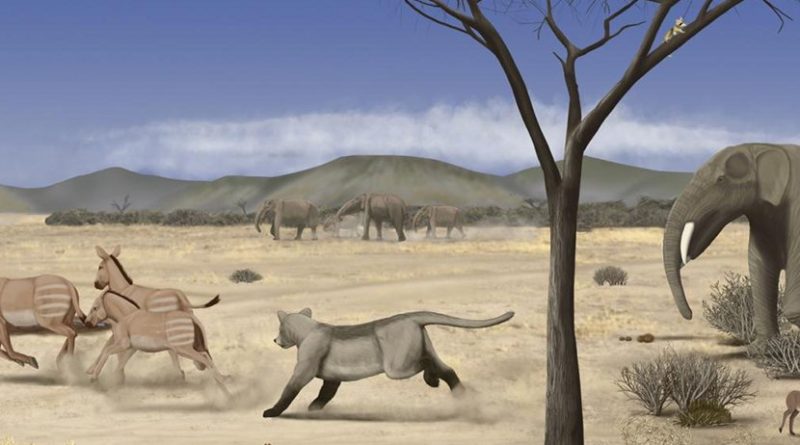 This is an image of an arid savanna during the middle Miocene in Madrid. Credit: Marco Ansón

The Central Iberian Peninsula was characterised by a very arid savanna during the middle Miocene, according to a study led by the Complutense University of Madrid (UCM) that compares the mammal assemblages from different localities in Africa and South Asia with those that inhabited the Iberian central area 14 million years ago.

The results of this study, recently published in PLOS ONE, are the product of more than fifteen years of fieldwork and previous paleontological studies of the fossil vertebrate remains found at the Somosaguas paleontological site (Madrid), which allowed paleontologists to inferthe type of environment that existed in the middle Miocene in the central part of the Iberian Peninsula. This fossil site is located at the Somosaguas Campus of the UCM, a particular feature as only two paleontological sites have been discovered up to now at university campuses worldwide (the other one being located in the USA).

“Based on this premise, the distribution of sizes within a mammal community can offer us valuable information about its climatic context”, explained Iris Menéndez, a researcher at the Department of Paleontology of the UCM and the Institute of Geosciences (UCM and CSIC).

In this study paleontologists have been able to infer that the centre of the Iberian Peninsula witnessed a very arid tropical climate with a high precipitation seasonality. After a brief wet period, the annual dry season could last up to 10 months. “These results confirm the previous inferences on the Savannahs environment of Somosaguas in the Miocene, but placing this habitat at their driest estimated, within the limits between the savanna and the desert”, said Menéndez.

This study compiled the information of climatic parameters for more than 60 current localities from Africa and Asia, including information of the body size of the mammalian species that inhabit these localities.

“For this purpose, we made a compilation of information on mammalian fauna lists, their body sizes, and climatic parameters for these localities, such as temperatures and precipitation. Based on this data, we developed statistical models suitable for the inference of different climatic parameters in the past”, said the UCM researcher.

“We included the information on the 26 mammal species found in the Somosaguas site, which allowed us to infer the environment by comparison with the extant assemblages”, she added.

Somosaguas is a particularly interesting fossil site in the context of paleoecological and paleoclimatic studies because it was located at a turning point during the Miocene. At this time, there was a marked change from warm and relatively humid global conditions to colder and arid environments. This inflection point eventually led to the beginning of the Pleistocene glaciations.

Moreover, the Somosaguas fossil site, due to its location within a university campus, gives to the general public the opportunity to visit it and learn all the details of the investigations that have been carried out from the data collected in the successive excavation campaigns.