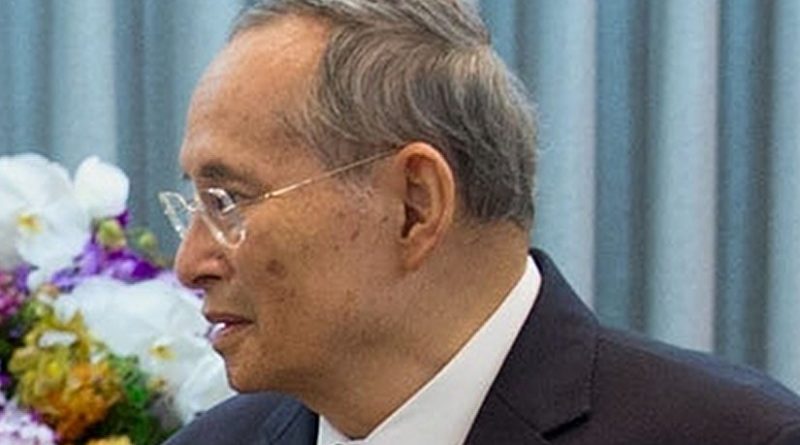 Criminal charges brought in Thailand against a factory worker for satirical commentary on Facebook about the king’s dog show the military junta’s misuse of laws intended to protect the monarchy, Human Rights Watch said.

On December 14, 2015, based on a complaint made by Thai military authorities, police filed lese majeste (insulting the monarchy) charges against Thanakorn Siripaiboon, 27, in the Bangkok Military Court. Thanakorn is accused under section 112 of the Penal Code of spreading “sarcastic” Facebook images and comments that were deemed to be mocking the king’s dog, named Thong Daeng.

“The charges against Thanakorn show the Thai junta’s ever tightening chokehold on free expression in the name of protecting the monarchy,” said Brad Adams, Asia director. “The abuse of lese majeste law has reached the absurd with the prosecution of a factory worker for allegedly offending the monarchy by insulting the king’s dog.”

Thanakorn also faces separate charges of sedition under section 116 of the Penal Code for online postings alleging members of the ruling National Council for Peace and Order (NCPO) junta of involvement in corruption. If found guilty of all charges, the court could sentence Thanakorn to up to 37 years in prison.

The Thai junta has arbitrarily and aggressively used the lese majeste laws to prosecute people for any speech found objectionable, including what is considered critical of the monarchy, The junta leader, Prime Minister Gen. Prayut Chan-ocha, has made lese majeste prosecutions a top priority for his government. Since the coup in May 2014, at least 56 lese majeste cases have been brought, 43 against individuals for online commentary. In a media interview on December 9, Maj. Gen. Wicharn Jodtaeng, chief of the NCPO’s Legal Office, said that commenting, sharing, or pressing “Like” on Facebook contents that the authorities consider offensive to the monarchy would be prosecuted as lese majeste.

Section 112 of Thailand’s Penal Code states, “Whoever defames, insults or threatens the King, Queen, Heir-Apparent or Regent shall be punished with imprisonment of three to fifteen years,” In recent years the government and the courts have interpreted the law increasingly broadly. In May 2013, the Supreme Court handed down a guilty verdict by concluding that Natchakrit Jungruengrit had committed lese majeste because of his comments about King Mongkut (Rama IV), who reigned from 1851 to 1868. The court ruled that “defaming the former king can affect the current king” and “King Mongkut was the great grandfather of the current king.”

The United Nations special rapporteur on freedom of expression stated in October 2011 that Thailand’s lese majeste laws were “vague and overly broad, and the harsh criminal sanctions are neither necessary nor proportionate to protect the monarchy or national security.”

Since September, 2015, those accused of committing lese majeste have been detained incommunicado in a prison facility at Bangkok’s 11th Army Circle military base. The government has denied requests by human rights groups to visit detainees and examine detention conditions at the base even after the recent deaths there of a fortune teller, Suriyan Sucharitpolwong, and Police Maj. Prakrom Warunprapa, both charged with lese majeste.

Military courts have imposed harsher sentences for lese majeste offenses than civilian courts did prior to the coup. In August, the Bangkok Military Court sentenced Pongsak Sriboonpeng to 60 years in prison for his alleged lese majeste Facebook postings, later reduced to 30 years when he pleaded guilty. It was the longest recorded sentence for lese majeste in Thailand’s history.

Neither the Thai monarch, King Bhumibol Adulyadej, nor any member of the royal family has ever personally filed lese majeste charges. During his birthday speech in 2005, the king stated that he was not above criticism. “Actually, I must also be criticized. I am not afraid if the criticism concerns what I do wrong, because then I know. Because if you say the king cannot be criticized, it means that the king is not human,” he said. “If the king can do no wrong, it is akin to looking down upon him because the king is not being treated as a human being. But the king can do wrong.”

The police, public prosecutors, courts, and other state authorities appear reluctant to reject allegations of lese majeste out of concern they might be accused of disloyalty to the monarchy.

“The heavy-handed enforcement of lese majeste laws is crushing freedom of expression in Thailand,” Adams said. “A serious discussion is urgently needed to amend the law and reconsider how it is enforced so that it conforms with Thailand’s international human rights obligations.”