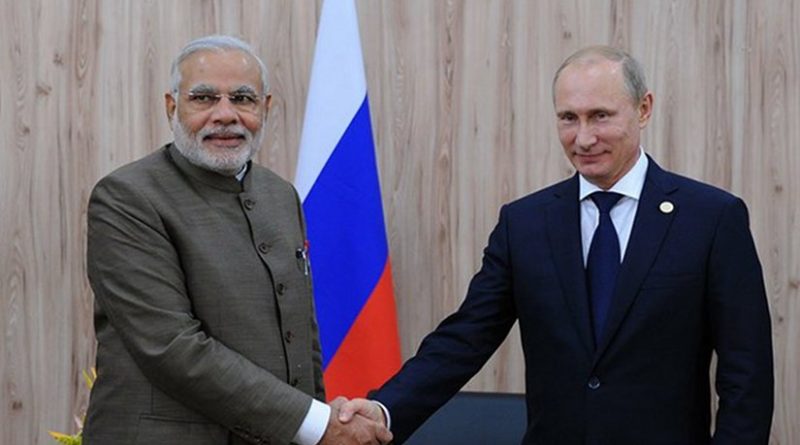 Fluidity in global geopolitical dynamics on verge of 2017 centring on USA, Russia and China with consequent impact on Indian foreign policy is already evident with the initial posturing of US President-elect Trump.

India’s foreign policy management since May 2014 has notched appreciable and dynamic successes under the leadership and personal diplomacy of Prime Minister Narendra Modi. India’s diplomatic profile has gone up and the regrettable ‘strategic deficit’ of the previous ten years of governance in conceptualising Indian foreign policy formulations stands erased. India today figures substantially in the geopolitical calculus of the Major Powers as never before.

In the unfolding geopolitical dynamics as the world heads towards 2017 India has emerged as the ‘Swing State”, something which can be lucratively capitalised by the Indian foreign policy establishment. Yet, attendant on all this is the crucial imperative for Indian foreign policy planners to estimate and predict the responses and reactive strategies of China and Russia to the forthcominglikely aggressiveness and lesser restraint in the foreign policy of the new US President.

India under the above contextual unfolding of global strategies of USA, Russia and China can no longer operate on the trajectory of its existing foreign policy template. In the ensuing melee, the strategic determinants of India’s foreign policy would tend to dominate the economic determinants. As far as the latter is concerned, India is already an established economic power and an attractive destination for Foreign Direct Investments. India would therefore be well advised to concentrate on the strategic content of its foreign policy formulations to meet the challenges unfolding in 2017 and which would go beyond 2017.

Indian foreign policy can never be crafted in a vacuum or delusionary Non-Alignment-ism or the much hackneyed “Strategic Restraint” mantra of yesteryears. Geopolitical dynamics would force India toexercise strategic alignment options with no luxury of hedging strategies or preaching multilateralism like China which while sermonising on the same behaves autocratically with its neighbours including India.

Imperceptibly and incrementally, but surely, India seems to have already exercised its strategic alignment preference in favour of the United States. India being designated as a ‘Major Defence Partner’ by USA and the various logistics access and interoperability agreements agreed upon testify to the enhanced strategic partnership between USA and India.

Both in India and the United States bipartisan strong support exists for the US-India Strategic Partnership. With that is as a given, India should expect that the same would continue even under the Trump Administration. Any contrary rhetoric during the Trump campaign trail needs to be discounted including his recent laudatory reverences in his telephonic conversation with Pakistan PM Nawaz Sharif.

The challenge for Indian foreign policy establishment in 2017 as regards the United States will rest more on higher strategic expectations and call that the Trump Administration would have on India as the United States gets tough with China and the resultant strategic fall-out from the same.

India may not be a full military alliance partner of the United States but the attendant circumstances which impelled the evolution of the US-India Strategic Partnership was the ‘China Threat’ factor and there is no point in being in denial on it. As a major ‘Strategic Partner’, the military expectations are the same as those from a military alliance partner. India’s challenge therefore in 2017 is not only to reinforce its strategic links with the United States but also prepare its diplomatic contingency plans to deal with the fall-out of the new ‘China Policy’ of the United States in the offing. Concomitant with the foregoing is the military imperative for India to upgrade its war=preparedness and fill the voids in its military inventories.

There is no point in India pretending that it can continue to be a neutral observer when the chips are down between USA and China. China can be expected to use India as a pressure point against the United States even without any military provocations by India. China has not forgiven India for moving into the American strategic orbit.

China will present the biggest foreign policy challenge in 2017 and the ensuing years basically arising from the more assertive policies of the United States in the Asia Pacific specifically and Indo Pacific Asia in general. China has fumed in various ways at the growing strategic proximity of India with the United States. This will intensify as the Trump Administration is unlikely to exercise strategic restraint with China in face of growing Chinese military brinkmanship in East Asia and on its peripheries, including India.

The China challenge to India’s foreign policy establishment gets magnified additionally with the China-Pakistan Axis getting substantially reinforced as a result of geopolitical changes adverse to China. Pakistan with China’s military encouragement would tend to adopt more provocative and adversarial postures against India. India should expect a surge in terrorist attacks emanating from Pakistan.

The inescapable conclusion rising from the above is that the propensity of the Indian foreign policy establishment to initiate unilateral political reachout to both China and Pakistan will no longer be valid. India needs to realise that the ‘Pakistan Threat’ to India in recent years is being fuelled more by China. China is the major, potent and long-range threat to India. No scope exists for Indian diplomacy to dilute the ‘China Threat’ and the now China-added ‘Pakistan Threat’ to India.

The challenge for India’s foreign policy and diplomacy in 2017 and beyond is to sensitise world opinion on the imminence of the ‘China Threat’ both in terms of military capabilities and intentions, not only to India but also to larger parts of Asia. This arises because in Chinese perceptions where the United States figures as the prime threat, China feels it best to first target countries close to USA like Japan and India.

Russia used to be the traditional counterweight to the ‘China Threat’ and ‘Pakistan Threat’ to India. But with Russia not even pretending to be neutral between China and India after having moved into China’s orbit, and under Chinese influence Russia openly allying with Pakistan, India is left with no strategic counterweight to the dual China-Pakistan Axis Threats, but for the United States and its allies.

Russia has in the last two years has openly reversed its strategic preferences in South Asia by openly siding with Pakistan on issues like the Afghan Taliban to furtherance of the China-Pakistan Economic Corridor.

India’s foreign policy challenge is 2017 is to devise diplomatic initiatives to offset Russia’s tilt to Pakistan and creating a complex strategic challenge for India in South Asia. In short Russia’s present moves in South Asia can no longer be viewed as India-friendly. India must forthwith reset its Russia-policy.

One would be glad to accept a cogent rebuttal to the above from the many China-apologists and Russia-apologists that thrive in India. India must not hope and be in a state of denial about Russia’s strategic commitments to India enshrined in the Russia-India Strategic Partnership or that the China-India Strategic Partnership was an insurance against China’s adversarial stances against India or that would ensure peace and tranquillity on the Indian borders with Tibet, presently under Chinese military occupation.

One does not foresee any major complications arising from the advent of Trump Administration in India’s ‘Neighbours First’ foreign policy, barring Pakistan. China however will continues to muscle-in on to India’s turf and the future challenges are to ensure that Indian foreign policy gaze is not lifted from its neighbourhood while it wrestles with the challenges of the geopolitical churning involving the Major Powers.

Concluding, one would like to re-emphasise that India is at strategic crossroads where India in the pursuit of its national aspiration to emerge as a global player would be called upon to exercise its strategic preferences in terms of preferred partners with which it enjoys major convergences. On the verge of 2017, the United States, Japan, Australia, Indonesia and Vietnam should be the major focus of India’s foreign policy in 2017.

One thought on “India’s Foreign Policy Challenges For 2017 – Analysis”