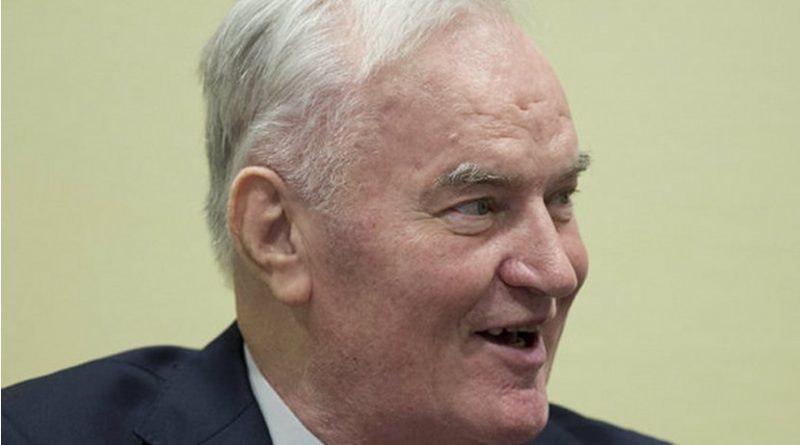 (FPRI) — On Wednesday, November 22, 2017, the International Criminal Tribunal for the Former Yugoslavia (ICTY) rendered its decision in the case of Bosnian Serb former general Ratko Mladic. The decision comes 22 years after Mladic’s final grotesque criminal acts at Srebrenica in 1995. This interval of over two decades between crime and punishment has brought the ICTY under attack yet again for the length of time it has taken to deliver justice in the Balkans. However, in defense of the ICTY, Mladic was only arrested in 2011 with his trial beginning in 2012. For over four years and 530 trial days, the Judges heard the evidence of 592 witnesses and were presented with 10,000 exhibits. This massive legal undertaking, involving complex international legal principles, brought victims and witnesses from all parts of the world. Even the most serious domestic trials pale in comparison.

Ratko Mladic was first indicted by the ICTY on July 24, 1995 immediately following his capture of the town of Srebrenica in the same month. This first indictment charged him with genocide, crimes against humanity, grave breaches of the Geneva Conventions, and war crimes committed on the territory of Bosnia and Herzegovina between 1992 and 1995. The full extent of the horror of Srebrenica was still unknown at that time. The same indictment charged Radovan Karadzic, president of the Republika Srpska, and the political authority parallel to Mladic’s military authority, with the same crimes. On November 14, 1995, Mladic and Karadzic were jointly charged with the mass killings at Srebrenica in a second indictment. Then, on October 10, 2002, a single, updated amended indictment was filed against Ratko Mladic only. An amended indictment had been filed against Karadzic only on April 28, 2000. The Prosecutor’s plan was to be ready to try either man separately if and when they were arrested. In 2002, both men were still on the run. While Karadzic was finally arrested on July 21, 2008, Mladic remained a fugitive protected by Serb security services and the army until May 26, 2011 when he was arrested in Belgrade right under the nose of the Serbian government. Throughout his period in hiding and after his arrest, Mladic continued to collect a Yugoslav army pension. Serbia’s failure to arrest Mladic, and bring him to justice, seriously harmed its relationship with the European Union.

The Trial of Ratko Mladic

Mladic eventually stood trial on a fourth amended indictment for 11 counts of alleged crimes committed in his capacity as the Commander of the Main Staff of the Army of the Bosnian-Serb Republic, also known as the VRS, between May 12, 1992 and November 30, 1995. This final indictment charged two counts of genocide and five counts of crimes against humanity, namely persecution, murder, extermination, deportation, and the inhumane act of forcible transfer. It also charged four counts of the violations of the laws or customs of war, namely murder, acts of violence the primary purposes of which was to spread terror among the civilian population, unlawful attacks on civilians, and the taking of hostages. The geographical scope of the indictment included Sarajevo, Srebrenica, and 15 other municipalities in Bosnia-Herzegovina. The Trial Chamber found Mladic guilty of genocide in Srebrenica, but not in any other municipality where the prosecutor had alleged that Mladic intended to destroy in whole or in part a protected group, the Bosnian Muslims. This verdict was reached because the Trial Chamber found that the groups of Bosnian Muslims targeted outside Srebrenica were not sufficiently large enough to comprise a substantial part of the Bosnian Muslim group. The size of a group is a part of the legal requirement to trigger genocide. He was found guilty of crimes against humanity and violations of the laws and customs of war in relation to his actions in Sarajevo and 15 other municipalities. Ratko Mladic was sentenced to life imprisonment.

The courtroom on November 22 was filled with both anxiety and hope. When Judge Orie, the presiding judge, began to read the summary of judgment, Mladic threw a fit shouting obscenities at the judges. He was eventually escorted out of the courtroom on the order of Judge Orie. His behavior precluded him from publicly hearing the final measure of his ghastly conduct. The subsequent life sentence brought tears to the eyes of those Bosnians in the courtroom.

The initial satisfaction with the verdict that filled the public gallery was later tempered with disappointment expressed by Muslims not from Srebrenica who stated the attacks on them were genocide. The judges found that while physical perpetrators outside Srebrenica did have genocidal intent, the number of Bosnian Muslims targeted with killing or physical or mental injury were not sufficient enough in number to constitute a substantial part of the entire Bosnian Muslim protected group—a legal requirement for genocide.

Unlike the more complex indictments of senior political leaders, such as Former President of Serbia Slobodan Milosevic and Former President of the Bosnain Serb Republic Radovan Karadzic, the case against General Mladic was a clear case of military command and control. Mladic had spent his life as a professional soldier and commander in the Yugoslav National Army. He had been the Deputy Commander of the Pristina Corps in 1991 at the time of high tension and the suppression of the non-Serb population in Kosovo. After that, he was in command of the Yugoslav National Army (JNA) forces in Croatia. Promoted to Major General, Mladic assisted ICTY-convicted war criminal Milan Martic, President of the Krajina, to establish an independent Serbian state within Croatia that, in effect, cut the territory of the country in half. Mladic led the siege of the Croatian village of Kijevo resulting in the town being completely looted and burned. As commander of the Knin Corps in Croatia, Mladic’s forces attacked Kijevo, Sibenik, Zadar, Vrlajk, and Skrabanj resulting in the death of 43 civilians and 15 Croatian soldiers. Mladic was never charged with his crimes in Kosovo or Croatia.

Mladic was promoted to Lieutenant General on May 24, 1992 and became part of the command in Sarajevo, where he commenced the Siege of Sarajevo, a four year blockade of the city which resulted in its destruction and thousands of civilian casualties. Once Bosnia-Herzegovina declared independence from Yugoslavia, the Serbian government and Yugoslav army established the Army of the Republika Srpska, the military force of the Serbian independent state in Bosnia. Mladic then became the chief of staff of the Yugoslav army in Sarajevo and the Commander of the Main Staff of the Army of the Republika Srpska. This public link command between two national armies demonstrated the Serbian government and army’s overall control of the events on the ground in Bosnia from the start of the conflict until its end. Mladic held the position of Commander of the Main staff of the Army of the Republika Srpska until the end of 1996, a year and a half after the mass killings had been committed in Srebrenica. In March 1995, the Srebrenica enclave, a UN-declared safe haven that was to be “free from any armed attack or hostile act” and was guarded by the Dutch Battalion of United Nations Protection Force (UNPROFOR), fell under Mladic’s control. Close to 40,000 Muslim refugees were forced out of the enclave, and over 8,000 Muslim men of fighting age murdered. The Dutch government, examining its army’s role and actions in attempting to negotiate with and placate Mladic during his attack on Srebrenica, collapsed in 2002 when a report blamed the Netherlands for failure to prevent the massacre.

The Case against Mladic

Joint Criminal Enterprise (JCE) is a mode of legal responsibility developed by the ICTY. While based on World War II jurisprudence at the ICTY, JCE is a derivative of the United States criminal liability theory of “common purpose” that is often used in the U.S. to indict mafia figures. Essentially, proof of a joint or common purpose between individuals to commit crimes is deemed sufficient to transfer culpability between individuals. JCE was used in the early days of the ICTY to tie individuals to crimes on the ground when the direct evidence connecting all individuals charged to those crimes was not sufficient.

In the case of Mladic, the evidence, orders, statements, and oral testimony were more than sufficient to directly connect him to the crimes with which he was charged. JCE was unnecessary. According to the senior prosecutor on the case, Alan Tieger, JCE is now being used to “tell a story.” The Mladic decision is divided into three JCEs: an Overarching JCE, a Sarajevo JCE, and a Srebrenica JCE. The individuals named as part of each JCE vary depending on the JCE. Many of the individuals named were not indicted by the ICTY, but were indicted by the domestic war crimes tribunal in Sarajevo and were acquitted or are deceased. While some were charged and convicted by the ICTY, others like former President of Republika Srpska Biljana Plavsic received a reduced sentence as part of a plea agreement.

It is unclear why the Trial Chamber rather than finding Ratko Mladic directly culpable for his crimes, which could have been so framed as around his military command position, chose to rely so heavily and develop so fully on JCE.

The overall effect of such heavy reliance on JCE effectively diminishes Mladic’s own culpability and widens guilt to individuals, in some instances, never accused by the ICTY.

The finding of guilt for genocide in Srebrenica and the life sentence for Ratko Mladic concludes a long trial and an agonizing wait by many for justice. I recall in the months after the genocide at Srebrenica, listening to Bosnian local and international radio stations reading the list of names of the missing from Srebrenica. These names had been provided by the mothers, wives, and sisters of men from Srebrenica. These mothers of Srebrenica were a constant force throughout the Mladic trial, serving as a reminder of the pain and loss inflicted by Mladic and his forces. They have expressed gratitude for the verdict for which they have patiently waited for a very long time.

About the author:
*Andrea Matačić Cayley, JD, Ph.D. is a Senior Legal Fellow with the Center of Justice and Accountability and the US Coordinator for Civitas Maxima, a Swiss-based Human Rights Organization. From 1995-2010, she worked as an attorney with the Office of the Prosecutor at the International Criminal Tribunal for the Former Yugoslavia.

One thought on “Understanding Conviction Of General Ratko Mladic – Analysis”