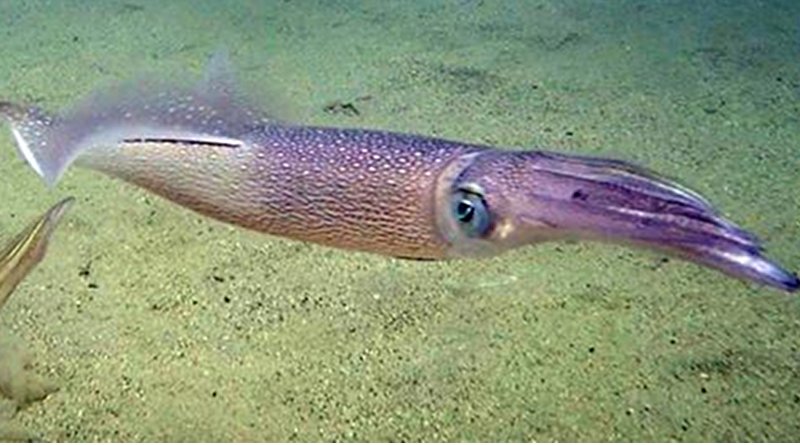 Longfin squid (Doryteuthis pealeii) are an important species in the east coast squid fishery, which is valued at about $40 million per year. CREDIT: Photo by Ian Jones, Woods Hole Oceanographic Institution

Exposure to underwater pile driving noise, which can be associated with the construction of docks, piers, and offshore wind farms, causes squid to exhibit strong alarm behaviors, according to a study by Woods Hole Oceanographic Institution (WHOI) researchers published in the journal Marine Pollution Bulletin.

“This study is the first to report behavioral effects of pile driving noise on any cephalopod, a group including squid, cuttlefish, and octopuses,” says lead author Ian Jones, a student in the Massachusetts Institute of Technology-Woods Hole Oceanographic Institution Joint Program in Oceanography.

Squid use natural alarm and defense behaviors like inking, jetting, and changing color and patterns on their skin for communication and also for survival when they’re trying to avoid capture. Squids’ changeable skin gives them the ability to create extraordinary camouflage, enabling them to blend into the background and avoid becoming a meal.

Jones and his colleagues in the Sensory Ecology and Bioacoustics Lab at WHOI exposed longfin squid (Doryteuthis pealeii) to pile driving sounds originally recorded near the construction site of the Block Island Wind Farm in Rhode Island. The squid exhibited the same types of natural alarm and defense behaviors when they were exposed to the noises, but it’s what they did next that surprised the researcher team.

“The alarm behaviors occurred within the first several noise impulses, but they diminished quickly within the first minute of playback,” Jones says. “That suggests a learned lack of response to the noise, as the squid perceive the noise stimulus may not pose an immediate threat, unlike the imminent threat of a nearby predator. This phenomenon is called habituation.”

Following a 24-hour rest period, the research team exposed the squid again. The squid exhibited similar responses and habituation rates, indicating that they had once again become sensitized to the noise.

“It was surprising that they basically showed the same responses on day two,” says WHOI biologist Aran Mooney, a coauthor and Jones’ advisor. “It was like the squid forgot the noise treatment from one day to the next, despite their super strong initial reactions. That kind of diminishing physiological or behavioral response to a noise may increase squids’ susceptibility to predators.”

In the next decade, the offshore wind industry is expected to expand rapidly in the Northeast U.S., causing concern among federal entities and commercial fishermen over how the behavior of commercially important fish and other species will be impacted.

Squid play a key role in the marine food web. Many marine mammals, seabirds, and fish feed off squid, as well as humans, who eat about three million metric tons of squid annually.

The results of the study could help management agencies and those in the offshore wind industry minimize disruptions to important fishery species like squid. The squid fishery on the east coast is valued at about 40 million dollars per year.

“Our results suggest that using longer periods between pile driving activity may discourage this type of long-term habituation, meaning squid will be more likely to respond to the noise with these alarm responses, and possibly more likely to successfully avoid predators with these responses as well,” Jones says. “This study has given us a first look at how human-made noise can influence natural, ecologically important behaviors of these squid, and we still have much to learn about how these behavioral changes might influence squids’ interactions with predators and with other squid”.