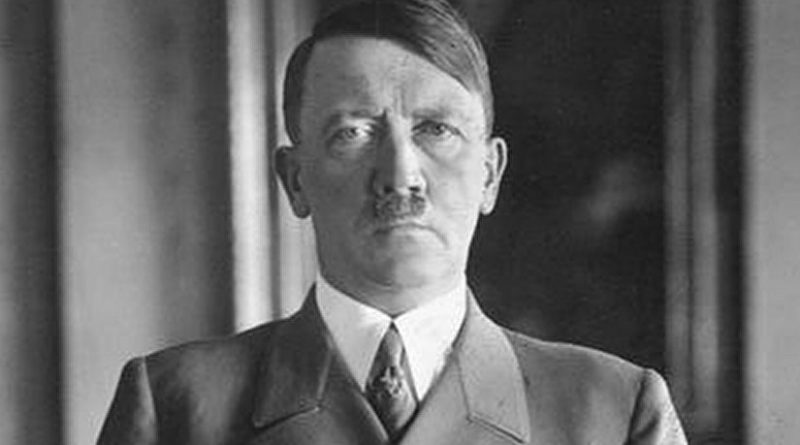 Adolf Hitler: This image was provided to Wikimedia Commons by the German Federal Archive.

Imagine waking up to the shock, the excitement of the new Germany in 1933, when Hitler became chancellor. An earthshaking moment, promising a new Germany, for Germans. Overnight, the new flag is raised everywhere, children don uniforms, fascist supporters face off against the communists and social democrats.

When Trump sailed to victory in November 2017, there was a similar sense of a new US, now led by a populist man-of-the-people, the little guy’s hero, fighting the good fight. American for Americans. A paradigm shift.

In both cases, the left was split and unable to fight the right wing but supposedly populist agenda of the two outsiders. In Germany, the powerful communist party, the KPD, was pushed by Moscow to break with the social democrats, in 1928 considered more dangerous than the fascists. So communist workers were supposed to abandon their unions and form new ones with the correct line. The sensible communists formed a new party. The rest is history.

The current opposition to the bad guy Trump is similarly weak and divided, the democrats in shambles, the ‘alt-left’ scattered and without clear leadership. The political awareness of the 1930s largely gone, with identity politics dominating the news, along with age old anti-Russian prejudice, leaving real political understanding behind.

This weakness has allowed the US under Trump to morph into a sprawling, zany remix of Hitler Germany circa 1933:

There is no Mein Kampf Part II, thankfully. There is Trump: The Art of the Deal (1987), and Great Again: How to Fix Our Crippled America (2016), but so far it looks like Trump, apart from a tax cut for the rich, is just barely keeping ahead of his critics, unlike Hitler, who wiped his out. However, there are striking parallels between the two outsiders, who both took the establishment by storm. The most compelling is at least one good Hitlerian idea: create jobs by massive infrastructure projects, though Trump has yet to do anything about it.

The status quo political forces behind Trump are hostile, strong and more entrenched than those Hitler faced as he scrambled to power. Trump’s Molotov-Ribbentrop feint quickly collapsed. The current madness accusing Russia of manipulating US elections, threatening his impeachment, astounds any sane person. The hysteria over Crimea and Ukraine is straight out of the Cold War playbook, reaching back to Hitler’s ill-fated invasion of the Soviet Union in 1941.

German humiliation was off the charts in the 1920s–30s, far worse than US humiliation in 1960s–70s, during and after Vietnam (the only war the US acknowledged losing). Hitler had a firm grip from the start, with Russia and communists enemies numero uno, his free ticket to seizing power.

Trump does not have a firm grip, despite his populist talk of ‘making America great again’ (i.e., before Vietnam). It is not inconceivable that Trump will be impeached for his dalliance with the bear, or just shear incompetency (25th amendment of the Constitution) though that is a risky strategy. Could US ‘democracy’ survive another impeachment? It came close to breaking the empire after Nixon.

The US fell into disarray when Nixon was impeached, leading to a weakening of the US ability to subvert/ control other countries. The post-Nixon period was a flowering of true democracy for a brief period, with revelations of CIA crimes, an honest effort at detente with the Soviet Union, culminating in the election of the only truly peace-loving president, now a saint, Jimmy Carter.

Carter kept the CIA at bay long enough for successful revolutions in poor Nicaragua and Grenada, but was hoodwinked by his National Security Advisor Brzezinski, and was sucked into Afghanistan to defeat the bear once and for all, supposedly ending the Cold War. Instead, this clever conspiracy morphed into today’s apocalyptic world, a kind of replay of the aftermath of WWII, where war brought only more war. Playing with Russia has unpredictable outcomes, mostly bad.

Slayer-of-the-Soviet-dragon Reagan is Trump’s model — massive arms build-up, the big fist wherever needed, even a pretense of making peace with Russia. Reagan had a moribund Soviet leadership and then a preppy Gorbachev, easily hoodwinked. The Soviet Union was weak in the 1980s, and Reagan didn’t need much effort (OK, Afghanistan) to topple it, and it looked down for the count, so peace was no problem.

Our era could well be seen as the Reagan-Trump era. The only difference is that Trump is faced with a formidable protagonist, the dynamic, brilliant Putin, whose charisma and charm are his, Trump’s, template. Trump craves the popularity of his rival. When your rival is more popular, you want to emulate him. Both Trump and Putin are believers in Sun-Tzu: Keep your friends close, and your enemies closer. But the US political elite didn’t like the idea of another Putin, this time in the White House. Where would that leave them? Where would that leave the empire?

US-NATO want to take control of Ukraine and demand that Crimea be part of their Euro club to boot. They want a submissive Russia. Probably Trump couldn’t care less. He wants to love Russia (for his own egotistical reasons, or perhaps for a real desire for peace, who knows?), the American elite wants to hate it (for US imperial reasons).

If there is an afterlife, I’m sure Hitler is looking on with glee at the inspiration and chaos he left behind — his enemy, white America, however feebly, fighting for race; his other enemy, Russia, crippled, and at the same time able to trip up the US, in its own dream of a thousand year American Reich.

He won’t be happy with the Jewish power prominent in US-Israel, or the ‘political correctness’ of gender-bending. Perhaps he oppressed homosexuals because he was a self-hating one himself. Hitler was (probably) a virgin to the end, and Nazi gear is a popular gay fetish.

There was/is lots of homoeroticism in Nazism, which required a purge, the Night of the Long Knives in 1934, right up there with Kristallnacht for the Jews in 1938. All these ‘subhumans’ detracted from the glamour of the Nazi warrior culture, which survives today in little pockets (unless you consider the US army closet-Nazi), mostly attracting angry teens, erupting and quickly fizzling out.

All the talk of gay marriage, women in the army, gay soldiers is perhaps a postmodern compromise to accommodate fascism — use identity politics, and the defanged symbols of flag and fuhrer, to distract anyone who might be questioning neoliberalism. Politically correct, postmodern Nazism.

There is no evidence of Trump’s ‘inner gay’, no sexual skeletons in his closet at all. That is impressive, as one media icon after another is toppled today for what formerly was just business as usual, but is now scandalous behaviour. Trump can only think longingly of days of yore. His empire is getting duller by the day.

Trump (like Hitler), rightly or wrongly, sees the gender-bending craze as unseemly, disruptive of the macho steel fist he wants the US to exercise around the world. Are women and transgender soldiers good ambassadors abroad when invading other countries? Do they educate ignorant locals to American ‘values’? Or just reinforce local resistance to the obscenity of invasion and destruction of their cultures by this legalistic individualism?

Hitler also wouldn’t like Trump’s disdain for nature. That is where Hitler was much better than Trump, at least in theory. The Nazi ideology of race was deeply tied to love of nature. The homeland was sacred. The Nazis ordered soldiers to plant more trees. They were (along with the Soviets) the first Europeans to establish nature reserves and order the protection of hedgerows and other wildlife habitats. And they were horrified at the idea of hydroelectric dams on the Rhine. Adolf Hitler and other leading Nazis were vegetarian and they passed laws on animal rights.

Trump’s open disdain for the environmental movement puts him starkly at odds with the Nazi leader. Trump is no vegetarian. Land should be turned into golf courses or hotels. Rivers be dammed! The Nazis promoted the idea of a synthesis of rural and urban, “rurban” values (Arthur Schweitzer, Big Business and the Third Reich). The Nazis promoted the view that the class-struggle in the city could be overcome by returning to the villages and developing artisan and agricultural economies based on cooperation, by government control of land use.

‘Aryans’ needed to get back to the soil and simple life. Ideas that resurfaced in the West in the 1960s and still resonate.

But these socialistic plans fell to the axe of big business in the 1930s. Hitler also liked war, and knew who was paying the bill, so his environmentalism was largely discarded in favour of big business. Hitler’s legacy in that regard is limited to vegetarianism, some trees and a few parks, though it lives on in modern Germany, and is still a model for the US to emulate in some post-Trump era.

History is notorious for repeating itself as parody (thank you Marx). We needn’t fear Trump actually starting another world war. It’s doubtful anyone will ever vie with Hitler as the ultimate monster. A counterfactual is tempting in that respect:

If Hitler had been impeached (and Stalin had left the German communists alone), the Communists would have taken over and the world would be a very different place. No war (certainly not WWII), relations between countries built on equality (at least not on conquest), lots of trees. If Trump is impeached, it means a free pass for the neoliberals and hawks under the wiley Pence. A more boring version of what we have now. Where are those revolutionaries of yore today?