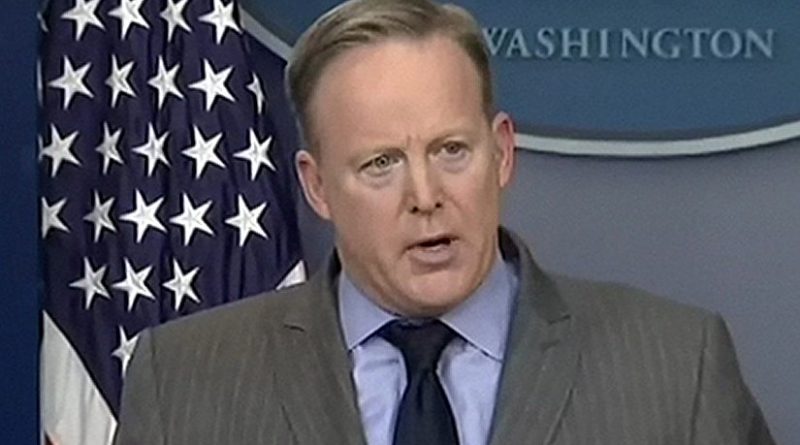 The White House responded to testimony on Capitol Hill about surveillance of the Trump campaign and its reported interactions with Russia by downplaying the roles the accused played, shifting suspicion to Democrats and attacking the media narrative.

On Monday, FBI Director James Comey and NSA Director Mike Rogers testified to the House Intelligence Committee that they had yet to discover any evidence that Trump Tower in New York had been wiretapped during the 2016 presidential campaign. However, Comey did confirm that the bureau is investigating possible Russian interference in the election, including alleged links between Moscow and Donald Trump’s campaign.

The five-hour hearing was not yet over when White House press secretary Sean Spicer stepped to the podium for the daily briefing, promising to respond to the testimony as best he could to “the first of several” House and Senate hearings on the investigation, which began after an early-morning tweet storm from the president in early March in which Trump blamed then-President Barack Obama for “wiretapping” Trump Tower.

“The president is happy” that the House Intelligence Committee is “pursuing the facts in this,” Spicer said. “Following this testimony, it’s clear that nothing has changed, senior Obama intelligence officials have gone on record to confirm that there’s no evidence of a Trump-Russia collusion,” he said, referring to Obama’s CIA director and director of national intelligence. “We take them at their word.”

Spicer pointed to “new information” that came about during the hearing about the intelligence-gathering process that is “newsworthy” regarding the unmasking of Americans identified in intelligence reports and the illegal leaks of their names ‒ specifically that of Trump’s former national security adviser, General Michael Flynn ‒ which, Spicer reminded reporters, “is a federal crime.”

The biggest questions to come out of Monday’s hearing, Spicer said, were how and why Flynn was unmasked, when his name is protected by law from being disclosed. A lot more questions need to be asked about government surveillance as well, he continued.

The White House appeared to blame “certain political appointees in the Obama administration” for the leak of Flynn’s name, pointing out that Comey had testified that they, along with senior Department of Justice and intelligence officials, had access to the identities of unmasked US citizens.

Before President Obama left office, Michael Flynn was unmasked and then illegally his identity was leaked out to media outlets, despite the fact that, as NSA Director Rogers said, that unmasking and revealing endangers quote national security,” Spicer said, noting that the focus should be on the threat such leaks pose to national security, citing in particular Comey’s remarks that such leaks became “unusually active in the time frame in question.”

When asked if Trump would withdraw his accusations against his predecessor after Comey said there was no evidence, Spicer said no, pointing out that there would be more hearings on the subject. He then went on the offensive against the press and Democrats, saying that the narrative that the Trump campaign and transition teams were in collusion with Russia was false.

“Investigating it and having proof of it are two different things. You look at the acting Obama CIA director said that there’s smoke but there’s no fire,” Spicer said. “There’s a point at which you continue to search for something that everybody has been briefed hasn’t seen or found.”

Most of the accusations of collusion with Russia refers to people who were “hangers-on around the campaign,” Spicer said, noting that “the greatest amount of interaction” many of those people had with the Trump campaign was receiving “a series of cease-and-desist letters.”

“When you read a lot of this activity about associates,” Spicer said, using air quotes, “there is a fine line between people who want to be part of something that they never had an official role in and people who actually played a role in either the campaign or the transition.”

Flynn “was a volunteer of the campaign,” while Paul Manafort “played a very limited role for very limited amount of time,” Spicer said, glossing over the fact that Flynn was officially Trump’s foreign policy adviser and that he was floated as a potential vice presidential candidate. Manafort was Trump’s campaign chair for two months at the end of the primary season, though Spicer said later he was not “dismissing Paul Manafort as a hanger-on.”Roger Stone was a long-time associate of Trump’s who “worked briefly on the campaign,” Spicer said. “They have talked from time to time,” but the press secretary was unsure of the last time Trump had spoken with Stone.

“To look at some individual that was there for a short amount of time or, separately, individuals who really didn’t play any role in the campaign and to suggest that those are the basis for anything is a bit ridiculous,” he added.

When asked about a Trump tweet from Monday morning about a potential DNC connection to Russia, Spicer sought to shift focus away from Trump’s claims and interactions and towards suspicion about the Democrats.

“The Democrats… are quick to point fingers, and yet, when it comes to discussing their own collusion or questions involving their involvement with Russian officials or buy-offs to the Russians, there’s no discussion there,” Spicer said.

The press secretary was referring to the hack of the Democratic National Committee’s servers, and he wondered why the party rebuffed the FBI’s request to look at the hacked servers more than once. “What are they hiding? What were they concerned of?” Spicer asked. He also raised the question of Hillary Clinton’s ties to Russia, including the Obama administration’s “Russian reset” and a deal that “gave a Russian company one-fifth of the US uranium supply. Where is the questioning about that?”