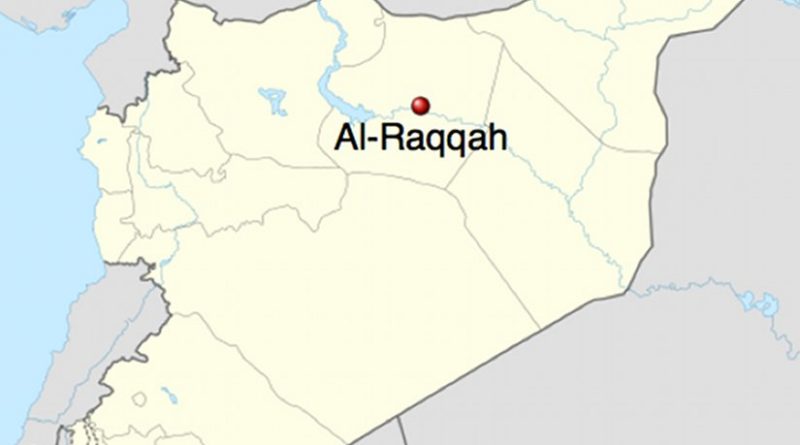 The problem with letting the Turks take Raqqa and presumably the entire Euphrates Valley that is now held by ISIS is that the Turks are endeavoring to hem in the Kurds. To do this, Turkey hopes to establish its Arab proxies in a new “Euphrates state” in eastern Syria. This would partition Syria into three states: a western Asad-ruled state; an eastern Turkish and Sunni Arab rebel-ruled state, and a northern Kurdish state.

Asad’s army has already taken a large swath of territory east of Aleppo, which cuts off Turkey’s access to Raqqa from al-Bab. Turkey has proposed taking Raqqa from the north at Tel Abyad. This approach would penetrate the Kurdish region at its middle and cut it in two. This objective of splitting the autonomous Kurdish region in two is the main reason Turkey offered to take Raqqa. If the United States helps or allows Turkey to attack the Kurds at Tel Abyad, it will have no Kurdish allies to attack Raqqa or any other part of ISIS territory.

Why are the Kurds willing to take Raqqa even though they do not have territorial interests in and around Raqqa? They are investing in their relationship with the United States. They assume that it will serve them well over the long run when it comes to their political aspirations. They will get a lot of good training; they will get a dollop of heavy weaponry from the United States, which I doubt it can reclaim after the fight; they are building a command and control network for their force.  By the time this operation is over, one can guess that the Kurds of Syria will have four reasonably well trained, well organized, and well armed brigades that they did not have before.  One also suspects that there will be some military loot in Raqqa, which will fall their way.*

The second problem with having Turkey take this region is that its Arab rebel allies include Ahrar al-Sham (a deeply Salafist force, think the Taliban, which adamantly opposed to the US), the dominant militia in its panoply of Arab militias. Ahrar recently split in two, one half joining al-Qaida in Idlib and the other half joining the Turkish coalition of rebel groups, where it is dominant. If Turkey-Ahrar establish rebel rule over the Euphrates, it will become a haven for Salafists and possibly al-Qaida and the coalition of rebel forces now dominating Idlib province; the US has been bombing the al-Qaida leaders there. Turkey has worked with al-Qaida’s forces in Syria throughout the last five years. It allowed them to mass inside Turkey in 2013 when they spearheaded an invasion from Turkish territory into Kassab, north of Latakia. This region is known for its Armenian villages, the last traditional Armenian villages that were not ethnically cleansed by Turkey during WWI. All the Armenians of these villages fled in front of the rebel militias led by Nusra (al-Qaida’s wing in Syria). The churches were ransacked, old frescoes defaced, and crosses destroyed. Turkey does not mind Salafists being part of its Arab forces. Turkey is using these forces as proxies to thwart Kurdish ambitions.

The Turks are pitching their interest in liberating ISIS territory as a “local-Arabs-must-rule” campaign, but the Arabs whom it will be marshaling for its force are largely from Idlib and Aleppo provinces. These are agricultural regions quite different from the desert and tribal Euphrates. The accent and customs of both are different. It is not certain that Raqqans will embrace these new rulers as being among “their own” or as an exercise in self-rule. Of course, they are all Sunni Arabs. In all likelihood, they will risk being dominated by anti-American Salafist elements that will assert themselves and reintegrate al-Qaida members and possibly ISIS defectors back into their state. After all, much of the Euphrates valley was ruled by al-Qaida’s Nusra militia before ISIS split off from it and kicked out Nusra. These elements emerged from the local people. They will reemerge if Turkey tries to administer the region with a light touch, allowing local Arab proxies to take power. If Turkey were to decide to use “extreme vetting” of its Arab proxies to eliminate Salafists, it could do so, but the US should not count on it. Turkey has refused to do this in the past. Salafists are the best fighters and most organized and disciplined of the militias.

These, I believe, are the reasons that American generals do not want to work with Turkey. They don’t trust it, both because it wants to attack our Kurdish allies and because it is soft on al-Qaida-like rebel groups.

What is more, Iran, Russia, Asad, Iraq, and the Kurds will escalate against it. They will not allow the United States to sponsor a Sunni rebel enclave in the middle of their new “sphere of influence.” They will view it as an irredentist provocation bankrolled by Saudi Arabia, Turkey, and America to fire up Sunni resistance to Asad rule in Syria, Abadi’s rule in Iraq, and Kurdish rule in Rojava. The US would be expected to side with Turkey and the Sunni rebels in a long and escalating war against the Shiites. I think this is a swamp waiting to suck the United States into its malodorous depths.

Russia and Iran want to divide ISIS territory between the Kurds and the Syrian government that is led by Asad. The United States should allow this to happen if it wants an exit strategy. Such a strategy, of course, delivers the Euphrates basin back to Asad’s dictatorial rule and into the hands of authoritarian Kurdish rule. It will not be democratic. Asad will seek vengeance against those who rose up against him. This strategy does not promote the sort of representative democracy or human rights outcome the US is pledged to support. All the same, it will be the fastest way to bring stability, restore government services, and rebuild the region. The Syrian government will police against ISIS and Nusra as the Iraqi government does in Iraq. This is the best way to defeat ISIS and deny its territory to some Salafist redux.

To get Turkey to accept the Russian/American plan, Turkey will have to be reassured that Syrian Kurdistan will not be used as a staging ground for PKK forces to attack Turkey. Erdogan will need guarantees that Turkey’s Kurds will not be incited to break away and take eastern Anatolia with them. Restraining Syria’s Kurds is in the interest of the US, Russia, and Asad. If Syrian Kurds can be persuaded to limit their ambitions, as Iraqi Kurds have been, Turkey’s national integrity will not be threatened. This strategy is a gamble, but gambling on the Kurds to limit their ambitions to Rojava (Western Kurdistan) is less risky than gambling on Turkey to spearhead an invasion of Syria through Kurdistan and build a well-governed and peaceable Sunni state that limits its ambitions to the Euphrates valley.

This is why the United States should team up with the Kurds to destroy the Islamic State.

*I would like to thank Barry Posen and Charlie Kupchan for sharpening some of these arguments. This article was published at Syria Comment