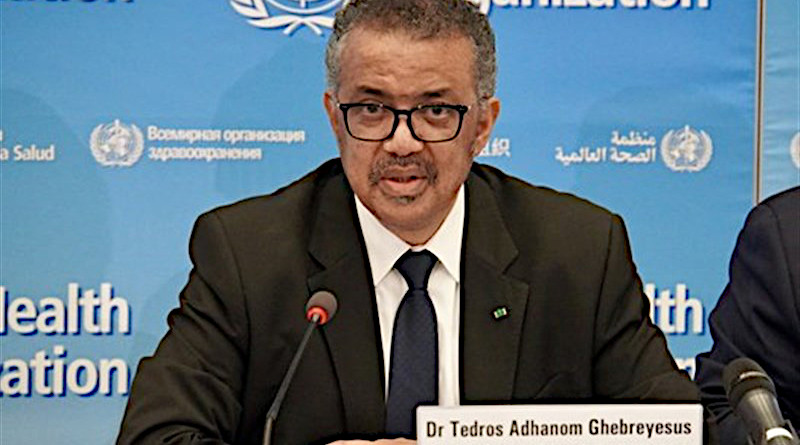 The chief of the World Health Organization warned Monday that the coronavirus pandemic is far from over, even as some countries gingerly started to ease restrictions.

“Trust us. The worst is yet ahead of us,” WHO Director-General Tedros Adhanom Ghebreyesus said. “Let’s prevent this tragedy. It’s a virus that many people still don’t understand.”

He compared the coronavirus outbreak, which worldwide has sickened nearly 2.5 million people and killed more than 167,000, to the 1918 Spanish flu that killed up to 100 million. But he said that such a dire outcome does not have to occur.

German authorities let some small stores reopen their doors after a four-week shutdown, while still enforcing social distancing rules. But Chancellor Angela Merkel warned that it is “inevitable” that new restrictions would be imposed if the virus erupts again.

Merkel said she understands the wish of Germans to return to a sense of normalcy, but said, “It is very, very important that we are neither careless nor believe ourselves to be safe – we must remain vigilant and disciplined.

“I believe very firmly that preventing a setback, in which we would have to return to tougher measures, is not just in the interest of fighting the pandemic but also in the interest of the development of our economy and social life,” she said.

Elsewhere, Serbia, with some of the strictest coronavirus rules in Europe, permitted open air markets and some businesses, such as dry cleaners and auto mechanics, to reopen. The daily curfew was shortened by an hour and people over 65 will be allowed to go outside three times a week for a walk.

Hundreds of small businesses in Albania reopened Monday for the first time in a month. Fishing boats and food processors also resumed operations.

Sri Lanka lifted curfews in two-thirds of the country, with plans for the rest to relax lockdown orders in Wednesday.

Students in Norway returned to school Monday, while those in Denmark are set to go back Wednesday.

Protests have erupted in some countries where wide restrictions are still in effect, including the United States and Russia. U.S. demonstrators have called on governors in several states to let them return to work, with President Donald Trump voicing support for the protesters.

Trump said at a coronavirus briefing Sunday that some governors have gotten “carried away” with their restrictions and that people have the right to protest. But he said none of it really matters in the end because he said states will start to reopen.

But some governors say their states are far from ready to reopen. The U.S. has more than 761,000 confirmed coronavirus cases, with its death toll topping 40,000.

In southern Russia, several hundred demonstrators booed a local official in the regional capital of North Ossetia who said the quarantine measures continued to be necessary. Police detained several organizers of the rally.

Russia has recorded more than 47,000 coronavirus cases, with the death toll topping 400. President Vladimir Putin says Russia has slowed the coronavirus outbreak but warned that his country has yet to see the peak of infections.

WHO’s Tedros said he was “encouraged” by countries planning how to ease social restrictions, but he cautioned it is “critical that these measures are a phased process.”

New Zealand announced Monday its plans to start emerging from a one-month lockdown beginning April 27 with such a phased approach. Prime Minister Jacinda Ardern said some restrictions will be eased for a two-week period at which time her government will evaluate the situation and decide whether to allow more activities.

Officials in South Korea also urged a cautious approach after lifting some lockdown measures as the number of new cases there continued to show sustained decline.

“We must not let down our guard until the last confirmed patient is recovered,” President Moon Jae-in said.

A British government minister said pubs and restaurants will stay closed after the country starts easing its nationwide lockdown on May 7.

Zimbabwe’s president Emmerson Mnangagwa says mines and factories can reopen, but he has extended his country’s lockdown that was supposed to end Sunday another two weeks.