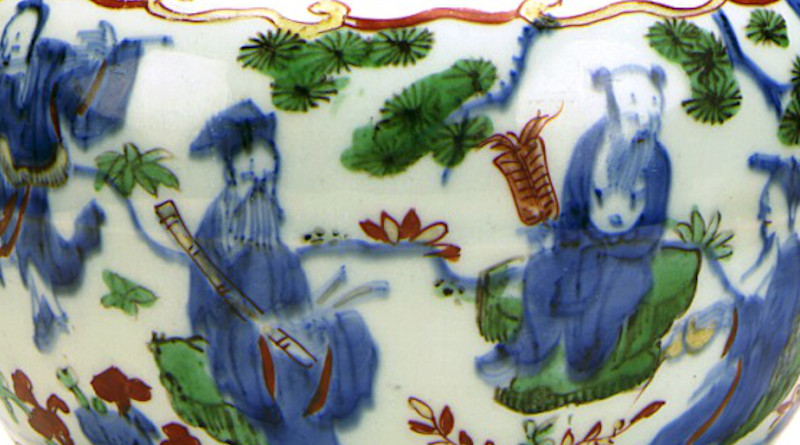 Porcelains and other ceramics emerged in north China in the late 8th century, influencing artists throughout Eurasia and beyond.

Two factors contribute to the reassessment of the history of Chinese art underway in museums and academia. One is the unprecedented array of archaeological discoveries throughout China, from all eras, unearthed during the last 40-plus years – and it is fair to say that no aspect of the vast and complicated history of Chinese art remains unaffected or unchanged. The other is the intensification of multifaceted scientific analysis of the materials and methods of production of works of art in museums throughout the world.

Both factors have redefined our understanding of the transformation of the Chinese ceramic industry, in particular the development of porcelain, during the Tang Dynasty, from 618 to 907. During this period, China was the epicenter of Eurasian trade, and Chinese ceramics, particularly high-fired white wares, were the most sophisticated produced anywhere in the world.

Previously thought to have begun in the south around the 12th century, early examples of porcelain were among the different types of white wares covered with glazes produced in north China during this time. Scientific examination has shown that some of these technically and visually innovative white ceramics were crafted using a clay with a high percentage of kaolin, a primary ingredient in porcelain, and fired at high temperatures, about 1300 Celsius, another characteristic. The combination of a white clay body and a glaze that hardens and melds with the clay during firing creates a thinner, but stronger, ceramic; a clean surface for decoration such as painting; and a piece inherently more hygienic than other types of clay. Therefore, such pieces were more suited for drinking and dining.

Although easily overlooked by visitors, a small 9th-century dish on view in the Yale University Art Gallery, above, illustrates the elegance of these early porcelains. The fine white porcelain clay used to make the dish is visible on the disk-shaped foot on the bottom, the only part not covered by the glaze.

It remains unclear why porcelains and other white ceramics appeared in north China at the time. It seems likely, however, that they were a response to the burgeoning of silver working, often echoing imported West Asian metalwork, and to changes in dining and the formal drinking of tea. Ceramics, preserved primarily in tombs, did not feature in daily life until the Tang when they also became the focus of study and connoisseurship. The poet and scholar Lu Yu, 733 to 804, in his influential Classic of Tea chose two types as best for drinking tea: green-glazed ceramics (Yue ware) from southern kilns and early porcelains (Xing ware) from the north. He selected them for their quality and ability to enhance the color of tea while drinking, and compared the porcelain to silver and snow.

In the late 8th century, Ali ibn Isa ibn Mahan, the military governor of the province of Khorasan in northwest Iran, gave 20 examples of early Chinese white ware to the Abbasid caliph Harun-al Rashid, who reigned from 786 to 809, in Baghdad. Harun, one of the protagonists of the fabled One Thousand and One Nights, featuring, among others, a fictitious sailor named Sinbad, received more than 2,000 ceramics, but contemporaneous sources highlighted the never-before-seen white wares, described as porcelains.

While small numbers of ceramics may have moved along the Silk Road, it is maritime trade – ships capable of transporting larger and heavier cargoes than camels could – that facilitated the distribution of Chinese ceramics to Southeast Asia, Iraq, Iran, Egypt and elsewhere, particularly after the 9th century. Rare within China at the time, white wares, particularly porcelain, were also the most treasured ceramics dispersed along sea routes. For example, only around 300 of the nearly 55,000 Chinese ceramics in a 9th-century shipwreck – an Arab dhow constructed of African wood, discovered along the coast of Belitung Island in Indonesia in 1998 – were white wares. Only 33 are porcelains.

Interest in recreating the highly valued Chinese white wares at kilns in port cities such as Basra and Siraf contributed to technical developments in the Iraqi ceramic industry in the 9th and 10th centuries. Because the working of clay is determined to some extent by the raw materials at hand, potters in Iraq used a yellowish clay with a low firing temperature. To echo the appearance of imported white ceramics, they developed a white glaze, colored with lead, sometimes opacified with tin, to cover the rough clay body. An example of this type of glaze covers the front and bottom of a 9th-century bowl inspired by a Chinese shape. The bowl includes a painted inscription in cobalt blue, reading “blessings to the owner, made by.” Presumably, the artist signed the bowl upon purchase. Writing at the time, scholar and poet Muhammad ibn Hani al-Andalusi al-Azdi, described such round bowls – some undecorated, some painted – as resembling the surface of a white pearl, shaped like the contour of the moon.

The use of blue for the inscription on Yale’s bowl is another example of the intensification of the interactions between Chinese and West Asian ceramics in the 9th and 10th centuries. While the use of cobalt was once thought to have originated in West Asia, a combination of archaeology and testing has shown that the blue in Tang dynasty glazes derives from a native cobalt. Cobalt was also used as a pigment on Chinese white wares at the time, often pieces intended for trade, such as the three found among the ceramics on the Belitung wreck.

While white ceramics with cobalt blue decoration were produced in both China and West Asia in the 9th century, combinations of porcelain and cobalt blue, popularly known as blue-and-white, first appeared in the mid-14th century. China, under the control of the Mongol Yuan dynasty from 1271 to 1368, had access to imported cobalt from northeast Iran and the Arabian Peninsula. Blue-and-white was a luxury in West Asia in the 14th and 15th centuries, and some of the most important collection of Chinese porcelains from this time remain in the Ardebil Shrine in Ardebil and the Topkapi Saray Museum in Istanbul. By the 16th century, after the voyages of the fabled Vasco da Gama around the Cape of Good Hope in Africa provided European explorers and merchants with access to the luxuries of India, Southeast Asia, China and Japan, Chinese blue-and-white porcelains became global luxuries, which explains the use of “china” as a synonym for porcelain in the West. As had occurred earlier in West Asia, European potters developed new clay bodies and types of coverings to mimic the impact of porcelain. The Meissen factory in Germany first produced porcelain in Europe in 1710.

An 18th-century Mexican jar in the Yale Art Gallery’s collection provides an intriguing codicil, one of many, to these ongoing Eurasian exchanges. Both the shape and the use of blue pigment on a white ground illustrate an understanding of the forms and designs found in the millions of Chinese blue-and-white porcelains transported around the world after the 16th century. Moreover, the white glaze covering the low-fired Mexican jar uses tin as an opacifying agent, a technology first developed in Iraq, introduced to southern Europe during the Umayyad conquest of parts of the Spain (751 to 1031), and later used to make majolica, among the most cherished Western ceramic traditions.

Note, all of the ceramics discussed in this essay can be viewed close-up at the Yale University Art Gallery’s website. Also read more about the gallery’s collection of Asian art.

*Denise Patry Leidy is the Ruth and Bruce Dayton Curator of Asian Art at the Yale University Art Gallery and the head of the Yale Department of Asian Art. She received her master’s and doctoral degrees from Columbia University and prior to joining the Yale Gallery, she served as the Brooke Russell Astor Curator of Chinese Sculpture and Decorative Arts (emerita) at the Metropolitan Museum of Art and curator at the Asia Society and the Museum of Fine Arts, Boston. Her books include Global by Design: Chinese Ceramics from the R. Albuquerque Collection, coauthored with Maria Antonia Pinto de Matos, 2016, and How to Read Chinese Ceramics, 2015.

Home » Pearls And The Moon: The First Porcelain – Analysis