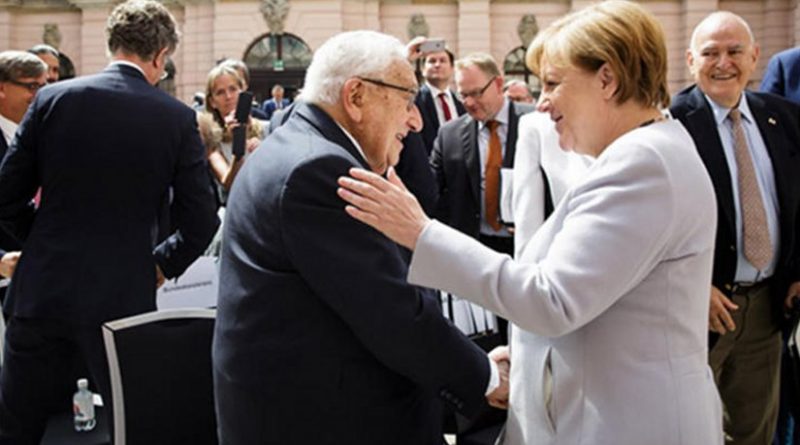 (EurActiv) — A strong European economy is good for the United States, German Chancellor Angela Merkel said on Wednesday (21 June), against a background of tense relations with Washington on trade and other issues.

Less than a month after US President Donald Trump called Germany’s trade and spending policies “very bad”, Merkel used an appearance alongside veteran German-born US diplomat Henry Kissinger to stress that the transatlantic relationship was rooted in “joint convictions, values and understandings.”

The event was organised on the occasion of the 70th anniversary of the Marshall Plan and its lasting legacy for today’s world leaders.

Merkel, who is seeking re-election for a fourth term in September, said the transatlantic relationship “does not focus on winners and losers, which could never work in the long-run.”

“It’s more about balancing interests. It’s more about achieving a win-win situation,” she added, invoking the post-war Marshall Plan with which Washington invested in Germany.

Relations between Washington and Berlin have turned tense in recent weeks after differences on climate, trade and defence spilled over into a war of words in which a leading German politician called Trump “the destroyer of Western values”.

Merkel’s words that close transatlantic ties brought benefits to all sides appeared to be a thinly-veiled response to Trump’s comments and his approach to the relationship and trade ties in particular.

Kissinger said the new world order shaped by the United States with Europe after World War Two built “the edifice of the rules-based system of the contemporary order.”

Trump’s decision earlier this month to take the United States out of the Paris climate change pact is seen in Berlin as a rejection of a key plank of that rules-based system, which Germany regards as crucial for managing globalisation.

Merkel will host Trump and other G20 leaders at a 7-8 July summit that is shaping up to be a fractious meeting after he last month criticised NATO allies over their military spending and refused to endorse the global climate change accord.

Last month, Trump also tweeted: “We have a MASSIVE trade deficit with Germany, plus they pay FAR LESS than they should on NATO & military. Very bad for US This will change”.

He made those comments a day after Merkel ramped up her doubts about the reliability of Washington as an ally.

Merkel said it was important not to forget that George C. Marshall, the US statesman after whom the Marshall Plan was named, “was convinced that good trade and a strong economy in Europe is good for American companies too”.

“Protectionism, isolationism impedes innovation and in the long-run this is disadvantageous for everybody, especially for those who count on isolationism even if they use different terminology for this,” Merkel added, according to an official translation into English of the remarks she made in German.