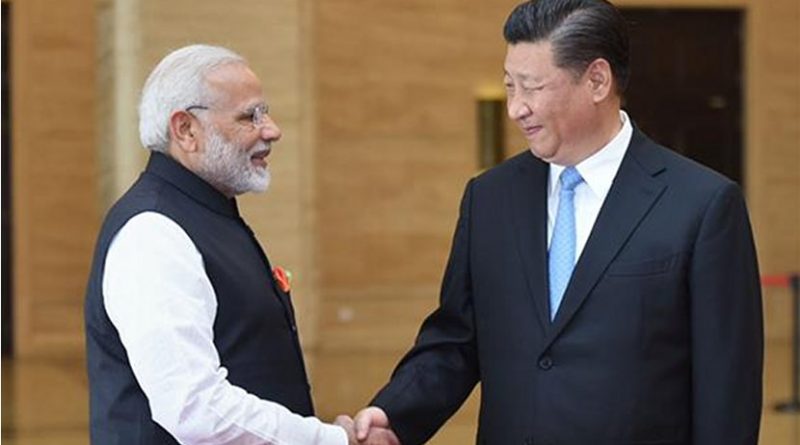 Whatever was believed, talked and written about for months and years since the sudden end of the ‘Cold War’, the informal, two-day Wuhan Summit has suddenly halted all doomsday predictions on India’s China relations. Now after the pre-scheduled Qingdao SCO Summit, where the leaders of the two nations met for a second time in six weeks, there is a deliberate reversal, but confined to China’s BRI and nothing more. Either way, it may also to the choice of the SCO Summit as the venue.

If nothing else, after the Wuhan Summit, the Governments of Prime Minister Narendra Modi and President Xi Jingping (China) have visibly cold-stored the earlier ‘Doklam psyche’. New Delhi also seems to be going back to the days of ‘cautious optimism’ in dealing with adversarial China/Pakistan kind, with post-SCO media reports indicating a possible Indian willingness to a moderated approach to Islamabad, too, if only there was will and willingness on the other side.

As is evident, the Modi leadership is not ready to throw the baby with the bath-water just because the Wuhan Summit may have shown signs of starting of a ‘new normal’ for and in China relations. Post-Wuhan, Indian ministerial references to China have been relatively soft, or at best ambiguous. However, at the SCO Summit, India stood alone on China’s BRI, continuing to stress ‘sovereignty’ issues that had governed the original Indian decision to stay away – and stay put, as such.

Maybe, it is in this context, the more recent idea of Chinese envoy Luo Zhaohui’s ‘idea’ of an India-China-Pakistan ‘security trilateral under the SCO’ needs to be viewed. According to The Times of India, Amb Zhaohui spoke thus on the subject: “Security cooperation is one of the three pillars of the SCO. Some Indian friends suggested that China, India and Pakistan may have some kind of trilateral cooperation under the SCO.”  A trilateral of the kind was a ‘good and constructive idea’, he said further.

As was only to be expected under the circumstances, the Ministry of External Affairs (MEA) lost no time in declaring that it may have been the ‘personal opinion’ of the Chinese envoy. “We have not received any such suggestion from the Chinese Government,” the MEA said. The ministry also clarified that “matters related to India-Pakistan relations are purely bilateral in nature and have no cope for involvement of any third country.”

The variants in the two statements cannot be missed. The Chinese envoy, obviously not without clearance from higher-ups in Beijing, said he was articulating the ideas of ‘Indian friends and experts’. Against this, the MEA statement pointed out that China did not make any such request/suggestion officially. China was referring to a ‘security trilateral’ while India was talking about ‘bilateral issues’ with Pakistan, which that can be resolved only bilaterally (before anything close to Amb Zgaohui’s reference could even be thought about). It is too early to say if both sides were talking the same language, or are at variance, big and small, or big or small.

In rejecting the BRI proposal, India’s expressed concerns were centred on the nation’s sovereignty and territorial integrity. Prime Minister Modi reiterated the same in his address at the Qingdao SCO Summit too. Leaving aside Modi’s political constituency back home, and his emerging global image as an ‘open-yet-tough’ leader, he was also articulating the consensual Indian position on the issue, which cannot be altered unilaterally or overnight.

As is known, the Pakistani leg of the Chinese BRI passes through PoK. The question arises if China had deliberately drawn in Chinese-occupied parts of PoK into the BRI, only to keep India out – or to put what it considers as a ‘trilateral issue’ back on the table, when nothing else could do it in the past. The alternative question is if India would have considered the BRI proposal any other way had it not been for this inherent, in-built glitch, if that is not a mild phrase.

It was/is not as if China, even more than Pakistan, could not have but foreseen the Indian concerns. Unless both China and Pakistan were otherwise convinced that India would have found other reasons and justification not to participate in the BRI project, there is a need to look for deeper meanings. If thus India did not participate in the BRI launch-function, where many western adversaries of China were present, it owed to Beijing’s insensitivities to New Delhi’s real concerns.

This is because India has live border disputes with the two nations, which all three acknowledge. India is also firm in keeping all disputes bilateral. When Pakistan handed over Aksai Chin in PoK to China, both sought to make this aspect of future India-Pakistan border negotiations, trilateral. Under the Shimla Accord (1972), Pakistan committed to keeping all negotiations bilateral, but there was no specifics or clarity on n Aksai Chin.

As la afffaire Doklam showed in 2017, only those ‘friendly nations’ such as Japan that had territorial disputes with China came up in support of India. Other post-Cold War ‘western allies’ of India did not offer even lip-service, implying that the nation cannot count on them if China were to launch a limited war, all out otherwise, but confined to the land border.

There is no denying that Indian armed forces can take on China and Pakistan together without any ‘external military help’, or even ‘political backing’ at the UNSC, where India is not going to become a ‘veto-member’ in the foreseeable future. But most of India’s post-Cold War additional military preparations to take on China, if it came to that, has centred on expanding the naval reach across the IOR, from Iran’s in the West for now and to the South-East Asian nations on the East.

Though a section of the Indian strategic community had projected and promoted Chabahar Port in Iran as India’s answer to China in Pakistan’s Gwadar, it is not to be. Iran, and also Afghanistan, on the western flank have accepted massive Chinese development and participation for their economic development. There is nothing to suggest that Iran would allow Chabahar’s use for anything but trade, unlike anything that could be imagined vis a vis Gwadar. Even India’s strategic ties in South-East Asia should be seen as specific to situations, and would need to be tested, when the need arose.

Peace and stability on the border for a considerable time is important for India to grow to its full economic potential, to be counted as a military power, as well. Every provocation on the border also means India having to divert developmental investments to military modernisation, including expansion, thus delaying the set goals on the economic front.

India has walked too far at every turn, to do a ‘China act’ – that is, to withdraw into a shell, stabilise the economy in whatever way and form, before opening up, economically, politically and now militarily. Leave aside the Nehru era, non-Congress Prime Ministers like Vajpayee and now Modi have also walked the same path, even more forcefully, if only to be heard louder than required on the home front.

Though no one is talking any more about an impending ‘debt-trap’ or a lasting, long-term economic reversal, India does need time and space to ensure exponential growth, to be able to sustain the present-day ‘self-image’ as a global-power in the making. The Indian policy-maker knows pretty well that problems with Pakistan and/or China cannot be resolved overnight, but he also realises that there cannot be continuing/continual tentativeness about re-working the relations.

India and China have had a series of official-level border talks, which did help in easing tensions, if not act as a CBM, until the more recent Chinese incursions. Unmentioned, these incursions may also owe to China’s perceptions about India’s role in the selection of a future Dalai Lama.

Beijing seems to have unilaterally concluded that India did not, and should not, have any such role, nor assume any. It is another that that in recent times, the Centre is reported to be downplaying the Dalai Lama ties and also the ‘Tibetan government-in-exile’.

A few years ago, the incumbent Dalai Lama ordained that His successors to the Holy Seat would have only temporal and no political role to play in Tibetan affairs. This means that the ‘Tibetan government and parliament in-exile’ would be the sole arbiters of all political matters. In a way, India’s commitment from the past is only to the high office of the Dalai Lama, if at all, and more so to the person of the incumbent.

Notwithstanding the border dispute and other concerns, the clincher in India’s China relations especially should owe to the latter stopping to meddle in the immediate neighbourhood, and acknowledging the region as India’s ‘traditional sphere of influence’. China has made huge monetary and substantial political investments in India’s neighbourhood, but its strategic intent is unclear as yet. Going beyond China’s traditional anti-India ally in Pakistan, it applies to all of South Asia.

For instance, along the southern IOR neighbourhood, India’s ‘Hambantota concerns’ viz Sri Lanka’s China relations are for real. It is still speculative in the case of Maldives, but again the Chinese investments are real – and so may be their perceived interest in domestic politics with a possible intent to stake a strategic foothold. If Hambantota is any experience to go by, independent of a change of political leadership, India would have to find ways for a post-poll Maldivian Government to pay off Chinese debts and investments, if the latter had to move out.

A political solution viz Pakistan, centred on alternating ‘core issues’ of terrorism (from the Indian perspective) and Kashmir (for Pakistan) is not going to be easy, either. Attempts at acknowledging the LoC as International Border (IB) had been made in the past, but they fell flat at the altar of political expediency and realities in Pakistan. Considering that Pakistan is wedded to China than even the US, winning over mutual confidence becomes an imperative for both India and China, if trilateral relations have to move forward and sustain. Going by experience, for India, it is a very tall order.

It is in this context, the post-SCO Summit media reports about Prime Minister Modi inviting President Xi for another round of ‘informal summit’ in India in 2019 assumes greater significance. As someone who had started it all through an imaginative reception for Xi in native Gujarat when the latter arrived on a State visit, Modi would also have to cover a lot of ground both on the domestic and international fronts.

A political consensus within the country and a comprehensive understanding by, if not with the existing allies, alone would help Modi take the perceived ‘Wuhan spirit’ to gain momentum – that too in a crucial election year in India. If nothing else, it is not going to be a ‘swing and song’ sequence for both, like their first encounter in Ahmedabad, back in September 2014.

Home » Can India And China Work For A ‘New Normal’ In Regional Relations? – Analysis