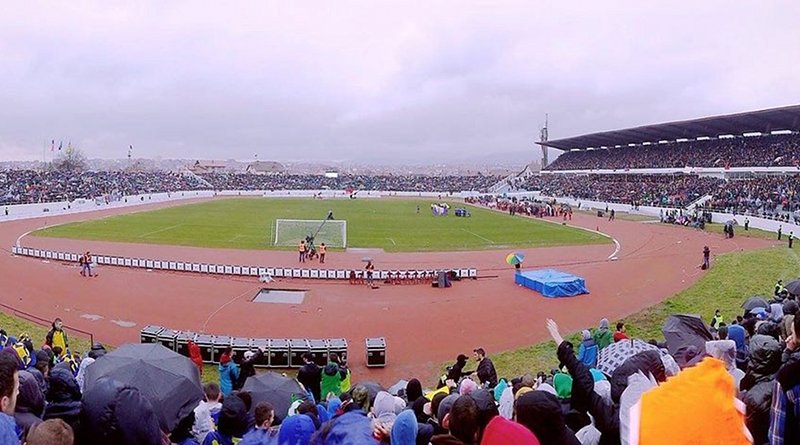 As Kosovo’s national football team goes from strength to strength, defying all expectations, managers and experts alike say the country must now work on upgrading its neglected sporting infrastructure.

Eleven Kosovo boys kicking a ball round a football pitch in Sofia eclipsed the events marking the 20th anniversary of Kosovo’s liberation, when they grabbed a dramatic last-minute victory against Bulgaria.

As part of UEFA’s Group A in the qualifications for the EURO 2020 football tournament, the Kosovo team has played England, the Czech Republic, Bulgaria and Montenegro.

In the first three of these matches, Kosovo drew Bulgaria at home and Montenegro away while winning a breath-taking match in a second game against Bulgaria in Sofia on June 10.

After a disappointing World Cup qualification round two years ago, Kosovo’s chances of qualifying in Europe’s top football competition look better than ever.

Major successes in only a few years

Along with tiny Gibraltar, the Kosovo team is the youngest in Europe, having been admitted to the world football federation, FIFA, and to Europe’s UEFA, only three years ago.

Until then, Kosovo teams were unable to compete internationally. Then, two years before admitting it, FIFA agreed to allow the team to play so-called “friendlies” with other countries under special conditions.

In their first qualifications for the World Cup in Russia this year, Kosovo ended up poorly placed at the bottom of its group, with only one draw in 10 matches played.

Over nearly three decades, the Kosovo team has taken a long and difficult road to international acceptance until the country obtained full membership of FIFA and UEFA in 2016.

In 2012, the veteran sports journalist Xhavit Kajtazi published a book, Kosovo Football, from Slavery to Freedom (1991-1999), which supplied facts and images about football in Kosovo since the break-up of Yugoslavia in early 1990s.

Among the more striking images in the book are pictures of footballers using rivers for their after-game “showers”.

Fast forward to 2019, and Kajtazi says the Kosovo team is notching up results in football that have caught many experts by surprise.

“The latest win against Bulgaria and its flamboyant rise in FIFA’s ranking have clearly defined that Kosovo has the potential, knowledge, quality and the will for success,” Kajtazi told BIRN – referring to the monthly FIFA rankings, in which Kosovo climbed six places in June, to 121st place..

Kajtazi says that national coach Bernard Challandes is reaping the fruits of the work of his predecessor Albert Bunjaki – although the latter left his post without any wins in his first eight World Cup “Russia 2018” qualification matches, the first international competition Kosovo ever took part in.

“[Bunjaki] travelled the world, working like a bee … to meet players and their parents and convince them to be part of the Kosovo national team. I think he succeeded in this,” Kajtazi says.

The Kosovo Football Federation now claims a list of more than 180 players of Kosovo origin who are making their way in Western leagues, especially in Switzerland, whose clubs are full of Kosovo footballers.

“He left his successor [Challandes] a list of players who play for well-known European clubs … who is now harvesting the fruits of this work,” Kajtazi says.

But the toughest games for Kosovo are yet to come. With two important matches against the Czech Republic and England in September, Kosovo manager Bekim Isufi counsels patience.

“We need to think that this is only the beginning and not be too euphoric … the boys need support, without any more psychological burdens,” Isufi told BIRN.

Years of underinvestment take their toll

Off the pitch, sport in Kosovo generally is struggling to overcome years of underinvestment in infrastructure.

For almost two years, Kosovo fans had to travel to the northern Albanian city of Shkodra to watch their national team play home games, as the country had no stadium recognized by FIFA as meeting standards.

In 2018, after several reminders from FIFA, the Football Federation succeeded in upgrading the main Prishtina stadium, which now hosts the national team.

Four days after the win in, and over, Bulgaria, Kosovo unveiled a major project – a new national 30,000-seat stadium, which is to be built some 30 kilometres west of Pristina.

Sports Minister Kujtim Gashi says he is hopeful that construction will start “within months”.

“I think we will have a stadium that meets the requirements of our football players,” Gashi said.

For Xhavit Kajtazi, infrastructure remains the “most painful” issue for sports in Kosovo. “The consequences of the war [of independence from Serbia] remain present in all sporting categories even now, 20 years on,” he says

“For me it is incomprehensible that a team that has become a champion of Kosovo has no adequate stadium or sport centre for matches and training,” he adds.

Although there have been some improvements in infrastructure, he says teams in Kosovo are still “training and playing on pitches which do not meet requirements at all”.

Most of the current national team players were born outside Kosovo to parents who were forced to migrate because of political pressures from the former regime of the Serbian and Yugoslav strongman Slobodan Milosevic.

Team manager Challandes, who is from Switzerland, admits that he uses this traumatic part of national history to motivate his players.

“I have spoken to them about the history of Kosovo, which has suffered a lot,” he recalled after the victorious match in Sofia.

“I told them that they are not like other players, considering the sufferings of their parents and of past generations in Kosovo. They were wonderful tonight. Clearly, they played for Kosovo,” he added.

The President of the Football Federation, Agim Ademi, agrees that although most players grew up far from their home country, they take their patriotic duties seriously.

“Almost 90 per cent of them were born out of Kosovo, but Kosovo is the motherland of their parents, and they have brought to the team with much patriotism and seriousness,” Ademi – who took over the federation after the death of Fadil Vokrri in June last year – told TV Dukagjini last week.

“They consider Kosovo as their homeland and are ready to give everything for it,” he added.

More players are expected to joint the team from European clubs.

In its last headhunting endeavour, Kosovo snatched a former captain of Serbia’s national youth team, Arton Zekaj, a 19-year old midfielder of Kosovo origin who was born in Belgrade.

Currently playing for Lille in France, he will be eligible to wear the Kosovo jersey from September.

Since the national team was formed, there have been harsh polemics in the media and on social networks about whether Kosovo should have a national team at all, as Albania’s national team previously opened its doors to players of Kosovo origin.

But the Kosovo team’s latest results have quashed the debate, with those backing the Kosovo national team emerging as clear winners.

Fadil Maloku, a Prishtina University professor and sociologist, says Kosovo’s “sporting magic” is helping to shape its social, political and even economic identity.

“Victories are sending a clear political message because sports today has become an industry that shapes national, social and cultural sentiment. This is happening with the Kosovo national team,” Maloku opines.

“It is strengthening the need for a state-building process, though it would be wrong to think that this could lead to profiling a new ethnic and national identity [for Kosovo] – because that identity was already there,” he adds.

But Bekim Isufi, who last year pushed the Drita football club to the Champions League pre-qualifications rounds, sees “evident differences” between players of Kosovo origin playing in Europe, and those who play for local Kosovo teams.

“Footballers who play outside Kosovo are part of stronger competitions and that increases their quality, due to better conditions,” he says. “Kosovo has talent, but needs more professional clubs to be ready for a national team.

“They need better infrastructure and well-trained managers to be in line with modern football requirements,” Isufi adds.

With only three years in the international arena, however, most experts agree that the national team has long exceeded what once were modest expectations.

In Xhavit Kajtazi’s opinion, Kosovo has no time to lose addressing the pressing issue of outdated infrastructure.