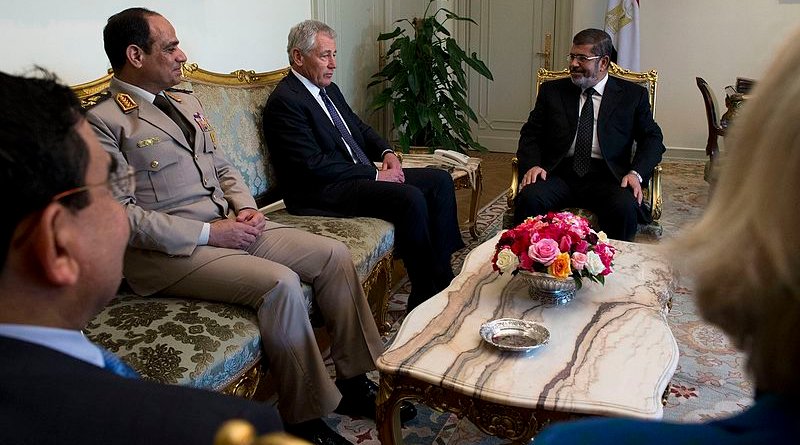 Morsi is survived by his wife Naglaa Ali Mahmoud (not “First Lady” but rather “First Servant of the Egyptian people”). Morsi had five children, two are US citizens born in California. His body was quickly buried without an inquest. His wish that he be buried in his hometown Adwa was denied.
Human Rights Watch official Sarah Leah Whitson said Morsi’s treatment in prison was “horrific, and those responsible should be investigated and appropriately prosecuted.” The United Nations High Commissioner for Human Rights, called for a “prompt, impartial, thorough and transparent investigation” into Morsi’s death. Among major world leaders only Turkey, Jordan, Iran, Malaysia and Qatar expressed regret at his death. Turkish President Erdogan said, “Morsi did not die a natural death. He was killed. Turkey will do whatever it takes to prosecute Egypt in international courts.”

Morsi’s legacy is mixed. An engineer who studied at the University of Southern California, he was an unlikely figure to be thrust onto Egypt’s central stage, not a major thinker in the Muslim Brotherhood (MB), without any political experience. He was an unconvincing second choice for the MB as presidential candidate, a bumbler, a poor speaker, but brave and principled.

The charismatic, millionaire businessman Khairat El-Shater, a major financier and chief strategist of the Brotherhood, was disqualified at the last minute based on previous trumped up convictions, and Morsi was only allowed a few hours before the deadline to register. He was vilified by hysterical secular westernizers, and undermined by a campaign of lawlessness and planned shortages, but was popular to the end among devout Muslims. The media and the elite were against him and drowned out the Muslim wisdom not to overthrow a ruler as long as you are “not commanded to disobey Allah. If he is commanded to disobey, then there is no listening or obedience.” Ibn Omar (Ṣaḥīḥ al-Bukhārī 2796).

The MB, like Iran’s Islamic order, doesn’t fit into western secular thinking. The MB supported the mujahideen in Afghanistan. But they are not the Taliban, they never supported al-Qaeda. They are more in line with Turkey’s Islamists. Or Iran’s Islamists.

A few key moments:*On 19 October 2012, Morsi traveled to Egypt’s northwestern Matrouh in his first official visit to deliver a speech on Egyptian unity at el-Tenaim Mosque. Immediately prior to his speech he participated in prayers there where he openly mouthed “Amen” as cleric Futouh Abd Al-Nabi Mansour, the local head of religious endowment, declared, “Deal with the Jews and their supporters. Oh Allah, disperse them, rend them asunder. Oh Allah, demonstrate Your might and greatness upon them. Show us Your omnipotence, oh Lord.” The prayers were broadcast on Egyptian state television and translated and posted by MEMRI, a Zionist media watchdog.

*On 22 November 2012, Morsi issued a declaration which intended to protect the work of the Constituent Assembly drafting the new constitution from judicial interference, until a new constitution is ratified in a referendum. This was blown up as an Islamist coup, but in fact Morsi was just trying to get around the Supreme Court, stacked with anti-MB judges, who would declare the MB’s programs and new constitution as … unconstitutional? Whatever. In the referendum to ratify the new constitution, it was approved by approximately two-thirds of voters.

*The declaration also required a retrial of those accused in the Mubarak-era killings of protesters, who had been acquitted. Additionally, the declaration authorized Morsi to take any measures necessary to protect the revolution.

*Morsi strengthened ties with Iran following years of animosity since the Iranian revolution in 1979. However, his actions were met with Sunni Muslim opposition both inside and outside of Egypt.

*He spoke out for the rights of Christians and emphasized that Islam requires there to be an ethical component in economic affairs to ensure that the poor share in society’s wealth.

Like Erdogan, in the heady days after the 2011 uprisings in the Arab world, Morsi got swept up into Islamic revolutionary fever, calling for the overthrow of the (Alawite) “infidels”, a kind of belated revenge for the slaughter of the Syrian MB by Hafez Assad in 1980. But then, just about everyone was (and still is) supporting the Syrian opposition, from Obama to most sunnis, soon-to-be-ISIS, and leftists.

The last straw for the military was when Morsi attended an Islamist rally on 15 June 2013, where Salafi clerics called for jihad in Syria and denounced supporters of Bashar al-Assad as infidels. Morsi announced that his government had expelled Syria’s ambassador and closed the Syrian embassy in Cairo, calling for international intervention on behalf of the opposition forces and establishment of a no-fly zone.

Morsi’s attendance at the rally was later revealed to be a major factor in the army’s decision to side with anti-Morsi protesters during the June 30 anti-Morsi protests. In November 2012, the National Salvation Front (NSF) had suddenly appeared, and overnight, a nationwide petition was signed by 22m Egyptians calling for Morsi’s immediate resignation.

Is it possible Morsi might have survived if he hadn’t broken relations with Syria and called for jihad? The Egyptian military looked at Syria and saw their own future. The Syria army was battling to hold the country together in the face of a dubious coalition of Islamists with lots of support from Saudi Arabia and the US. They decided they had to overthrow their own Brotherhood before it took them on and ended their privileged hegemony. The Egyptian military is trained and equipped by the US. Egypt runs on Saudi dollars. Best to keep the US and Saudis on your side and the message by then was ‘Dump the Brotherhood’.

We will never know, but the plan from the start clearly was for the all-powerful military to give the Brotherhood some rope, and then take charge and hang them (metaphorically and literally) if they actually tried to govern, counting on the vengefulness of the old guard and the  screaming liberals if the MB pushed too hard. The liberals were weak, and could be conned into supporting a coup, and then easily brought to heel with a few arrests and massacres.

This power politics isn’t confined to the Arab world. Iran and Venezuela are both targets of western-backed campaigns to destroy any attempt, Islamic or socialist, to escape the clutches of the US empire. Trump welcomed Sisi to the White House in April 2019, after Sisi declared himself president for life (in a referendum which he won with 88.3% approval). Trump: “We’ve never had a better relationship, Egypt and the United States, than we do right now. I think he’s doing a great job.”  After the meeting, Trump pushed for the US to designate the Brotherhood as a terrorist organization.

Just as Erdogan came to regret his betrayal of Assad (and barely survived a coup in 2016), so Morsi and the entire MB can only regret flirting with militant jihad abroad, from the 1980s on. Even if Assad is an Alawite and you don’t approve of that sect of Islam, you don’t overthrow him as long as he doesn’t commanded you “to disobey Allah”.

But then, 30 years ago it was official Egyptian and US policy to encourage Islamists from Egypt to go to fight in Afghanistan. And the campaign against Assad was/is almost unanimous in the West. So again, I sympathize with bad judgment by the MB.

MB spokesman Dardery said, “The nation elected Morsy to a four-year term and should stand by that. To do otherwise would disrupt the country’s nascent democracy. It is not fair to a democracy.” Lesson from Iran and Syria: If you’re going to have an Islamic revolution, make sure the people and army are on your side.

Sisi clearly models himself on Egypt’s 19th dictator-pasha Muhammad Ali. The parallel is stark between Sisi’s slaughter of thousands of Muslims, and Muhammad Ali’s clever invitation of all his Mameluke rivals to his citadel in 1811. He invited them to the centre of power and proceeded to slaughter a thousand of them to consolidate his rule. Invite your foes into the open and then murder them.

A legend of the pasha was that he had 300,000 street children rounded up and shipped to Aswan where they were taught skills and became assets to his construction of a new Egypt. Sisi launched just such a program “Homeless Children” in May 2017, planning to gather up street waifs and whisk them to an army camp for training.

Then there’s the new Aswan Dam, criticized as a white elephant, even as Egypt hovers on the brink of bankruptcy. (Along with it is a scaled-down version of the MB’s proposed industrial corridor along the Nile.) This nostalgia for the past is perhaps an attempt at taking the wind out of the sails of ISIS, the actual Muslim terrorists, yearning for the caliphate, but is just as misguided.

By attempting to destroy the MB, the legitimate Islamists, Sisi gives fuel to the ISIS fires. That was what the MB could have tackled, not a secular dictator persecuting devout Muslims. On the contrary, terrorism has increased dramatically since 2013, with at least 500 deaths.

The Ministry of Education have decreed that the revolution of January 25, 2011, and the uprising on June 30, 2013 will no longer be mentioned in high school history textbooks. The ‘Arab Spring’ didn’t happen. President Morsi is dead, assassinated. El-Khater and other MB leaders are on death row. Sisi is dictator for life.

The end of history? Hardly. As for Morsi, he enters the realm of legend, a kind of foil for bin Laden, as a true martyr to Islam.