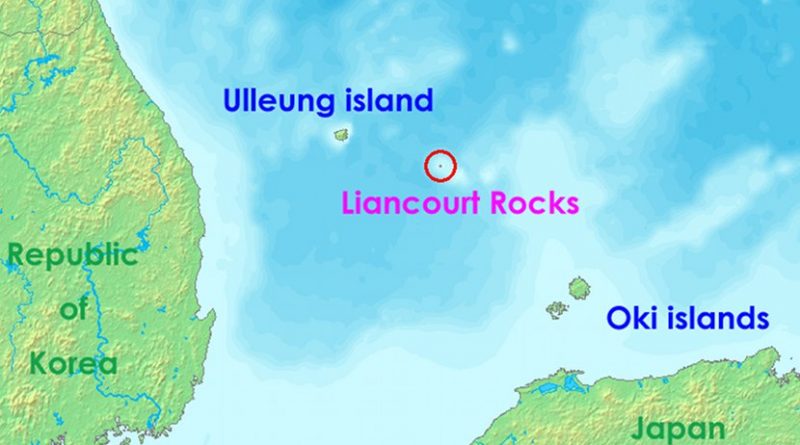 Over the last few years, maritime disputes in the contested waters of East Asia have made global headlines. In the South China Sea, China has faced opposition from Vietnam, Malaysia and the Philippines for its claims to sovereignty over the Paracel and Spratly Islands. In the East China Sea, relations have remained tense between China and Japan over the disputed Senkaku-Diaoyu islands.

Yet another long-standing maritime dispute in the region has continued to exist under-the-radar, and remains unresolved after more than six decades. The dispute concerns a collection of small islands located in the Sea of Japan – or the East Sea as it is known on the Korean peninsula. The contested islands are called the Dokdo Islands by South Korea, yet are known as the Takeshima Islands by the Japanese, and the Liancourt Rocks by many in the West.

The isolated maritime territory – consisting of two larger islands and more than thirty smaller features – is officially controlled by South Korea, yet is also claimed by Japan. The islands sit roughly half-way between the two countries, being located approximately 134 nautical miles from South Korea’s mainland, and around 155 miles from the Japanese coastline.

This article will seek to review the background context and current situation related to the long-running dispute over the Dokdo-Takeshima Islands, before assessing its impact on South Korean-Japanese bilateral relations and asking why the dispute has proved so difficult to resolve.

Both sides claim that their right to sovereignty over the islands stretches back hundreds of years, yet there is a significant degree of historical ambiguity to these claims. Instances of conflicting evidence make a clear and objective timeline of the disputes almost impossible to ascertain.

South Korea argues that the islands were first mentioned in historical literature from as long ago as 512-AD, whilst Japan argues that South Korea has failed to prove their control over the islands prior to their occupation by Japanese forces in 1905, several years prior to the Japanese colonization of the Korean peninsula. Japan’s Foreign Ministry has also stated that its claims originally date back to the mid-17th Century when the islands were used by Japanese sailors.

South Korea insists that the islands were rightfully handed back to the country following the 1951 Treaty of San Francisco, signed between the United States and Japan after the end of WWII. However, the islands had been omitted from the final text of the treaty, leading to confusion over which country was entitled to administer the territory. South Korea established formal administrative control over the islands in the mid-1950s – a move which Japan has described as an ‘illegal occupation’.

Today, the Dokdo-Takeshima islands remain administered by South Korea and the dispute has rumbled on at a relatively low level, albeit damaging bilateral relations between the two countries. South Korea has constructed a coast guard station on one of the two main islands, whilst on the other resides a Korean fisherman and his family – the territory’s only permanent residents.

There are several reasons why the dispute has proved so resistant to a resolution over the past six decades.

Firstly, nationalism remains a key factor on both sides, with the islands holding symbolic importance to both the South Korean and Japanese populations. Many South Korean’s see Japan’s unrelenting sovereignty claim as a neo-colonial attempt to retain a strategically-important territory acquired during Japan’s days as an imperial power. This aspect of the dispute is arguably the most sensitive, with many Koreans still feeling a sense of anger and humiliation over their country’s annexation by Japanese forces in 1910 and the lengthy occupation of the mainland which followed.

Nationalist sentiments have also been a feature of Japan’s continuing claim, with the southern Shimane Prefecture introducing an annual ‘Takeshima Day’ in 2005. In both countries, nationalistic feelings centred on historical animosity between the two regional powers have dominated thinking with regard to the dispute – resulting in occasional street protests by civilians and rhetorical flare-ups from political leaders in the aftermath of sensitive incidents.

Secondly, the dispute has proved even more intractable due to the economic and geo-strategic importance of the islands. The Dokdo-Takeshima islands are located in the middle of an important route for shipping and regional trade, and are surrounded by plentiful fish stocks. In addition, there is significant potential for the unexplored sea-bed around the islands to contain large amounts of oil and natural gas deposits.

Full political control over the islands would enable access to a 12-natuical mile Territorial Sea, along with a 200-nautical mile Exclusive Economic Zone (EEZ) stretching out from the coastline, under the terms of the 1982 United Nations Convention on the Law of the Sea (UNCLOS). This international agreement has further entrenched the position of both sides – as has also been the case with claimants in other territorial disputes in the South and East China Seas – due to the potential for large rewards in terms of energy security and economic prosperity, as a result of preferential fishing rights and greater access to natural resources within the legally delimited zones.

Whilst the disputes have continued at a low level for the past six decades, recent years have witnessed several flare-ups and periods of increased friction. In 2012, tensions reached their highest point when Japan recalled its ambassador to Seoul, following a high-profile visit to the islands by then-South Korean President Lee Myung-bak – the first visit by an incumbent Korean leader.

Concerns have also been raised over the impact of the dispute on bilateral relations and security co-operation between the two countries – both of which are allies of the United States. This question is especially important given the rapidly escalating nuclear threat emanating from the hostile regime in North Korea, after it conducted a series of missile tests earlier this year in contravention of a UN ban.

The successful management of this issue will require a unified response involving close cooperation between the United States and its regional allies. This provides a strong imperative for South Korea and Japan to put their long-running maritime dispute to one side, at least for now, and work more closely together to tackle a common threat.

At first glance, the dispute over the Dokdo-Takeshima Islands appears relatively minor in scale, especially when compared to the more complex maritime disputes underway in the East and South China Seas. However, the islands occupy a position of great national importance for many in both South Korea and Japan, a factor which provides a significant obstacle to resolution and has resulted in deeply-ingrained positions on both sides.

Whilst tensions occasionally rise to the surface, the dispute is not one which looks likely to result in military conflict any time soon. For now, with little sign of compromise or willingness to debate the issue of sovereignty on either side, the status-quo over the islands looks set to remain unchanged – especially whilst a serious threat to the entire region looms large on the horizon.