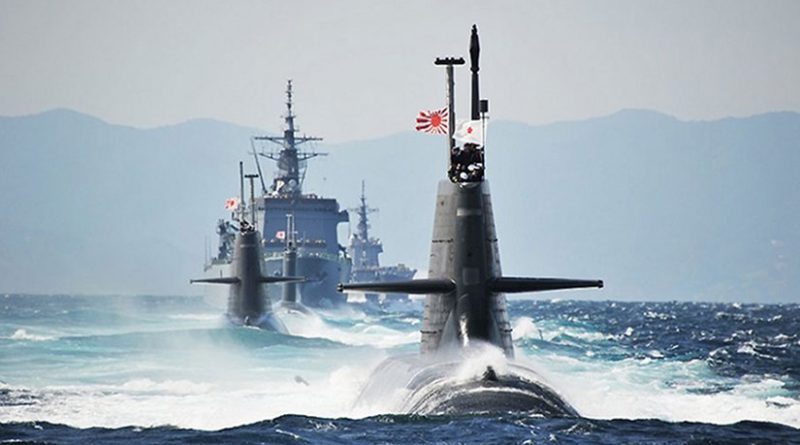 The enactment of Japan’s new national security bills was a long time in the making.  The bills, already passed by the lower house of the Japanese Diet in July, were approved by its upper house last week.  But ever since Shinzō Abe became Japan’s prime minister in 2012, he had sought legislation that would enable Japan to engage in “collective self-defense,” the ability to aid friendly countries under attack.  While that may seem routine in most countries, it has been anything but in Japan.  Many were unhappy with the legislation’s passage.  Those who opposed it feared that it would lead the country into war; and even some of those who supported it grumbled that it did not go far enough to make Japan a truly “normal” country, one where the use of force is considered as a legitimate tool of international politics.

Unsurprisingly, China was quick to condemn the legislation’s passage.  China’s Ministry of National Defense declared that Japan’s new security laws ran “counter to the trend of the times that upholds peace, development and cooperation.”  The ministry chastised “Japan’s war mentality, its reinforcement of military alliances and attempts to send more troops abroad.”  Chinese media was less charitable.  Xinhua carried the headlines: “China Voice: Is Japan bound up to battle chariot?” and “News Analysis: Japan’s pacifist ideals stripped as Abe steps closer to resurrecting old war machine.”  One commentator at The People’s Daily blamed the “unyielding spirit of militarism” of Japanese leaders who were “breaking [Japan’s] pacifist promise and getting ready to send its troops to battles again.”[1]

Of course, China rarely passes up an opportunity to remind Japan of its imperial aggression.  Thirty-six years of Japanese economic aid to China—now nearly $1.2 billion per year—has yet to restrain its reflex.  In part, that is because the Chinese Communist Party (CCP) has often used anti-Japanese sentiment to buttress its own political legitimacy.  (Only recently did the CCP even credit its longtime Chinese rival, the Kuomintang on Taiwan, for its contribution—arguably larger than the CCP’s—to resisting Japan in World War II.)

That it took so long for Japan to pass this sort of legislation is a testament to the strength of Japan’s postwar pacifist sentiment.  While militarist elements may still lurk in Japan, most Japanese are decidedly uncomfortable with the use of force in international politics.  That was clear during Japan’s negotiations with Russia over the Northern Territories (or southern Kuril Islands in Russia) in the 1990s.  Though Japan had already begun its long economic stagnation, its military and political might was still near its peak.  In contrast, Russia, following the fall of the Soviet Union, was at its nadir.  Things were so bad in the Russian Far East that it was questionable whether Moscow could provide enough food or heat for its population on Sakhalin Island, let alone defend it.

Yet, Japan did not try to use its military or political capital to pressure Russia into a settlement.  Rather, Japan solely relied on the persuasive power of its economic assistance.  That tactic ultimately came to nothing.  After Russia’s economy recovered, Japan’s window of opportunity to settle the dispute on favorable terms closed.  Today, Russian leaders act without concern over Japanese reaction.  They cavalierly flout Japanese interests.  This year, a series of senior Russian officials visited the four disputed islands, despite repeated protests from Tokyo.  Russian Prime Minister Dmitry even toured one of them in August.  While there, he underlined that the Kuril Islands “are part of Russia… That is how it is and how it will be.”[2]

Japan’s self-imposed limitation on its use of force has also impacted its ability to secure its place in a changing East Asian geopolitical environment.  China’s economic rise has drawn other Asian countries closer to its orbit, while its seemingly relentless military rise has upset the regional balance of power.  Without the ability to form true security partnerships, Japan has risked becoming isolated.  Hence, Abe has eagerly cultivated new political and economic ties across the Asia-Pacific, from Australia and India to the countries of Southeast Asia.  Japan has certainly become more sensitive to changes in Asia’s geopolitical balance.  Last year, after Thailand’s relations with the United States soured, offering China an opening, Tokyo leapt into the breach with pledges of economic engagement with Bangkok.

Surely, the most immediate beneficiary of Japan’s new security laws is the United States.  For the past half century, the United States has borne the entire security burden of the alliance between the two countries—if Japan is attacked, the United States is obligated to defend Japan; but if the United States is attacked, Japan has no such reciprocal obligation.  Even during the Cold War, that uneven arrangement rankled some Americans.  To make it more equitable, Japan accepted the lion’s share of the financial burden to host American forces in Japan.  But with the end of the Cold War and the withdrawal of a substantial portion of American forces from Japan (to Guam and elsewhere), the relationship was about to tilt again.  Thus, it was hardly surprising that Washington welcomed the legislation’s passage.

But beyond the United States, the legislation also enables Japan to more effectively cooperate with other countries on security matters.  If Japan’s relationships with Australia, India, the Philippines, and recently Vietnam mature into security partnerships, those countries can now count on Japan as a full partner.  In fact, in the days before the upper house vote on the national security bills, Abe met with Vietnam’s communist party secretary to discuss stronger security ties, in light of Vietnam’s dispute with China in the South China Sea.  Abe pledged more patrol boats for Vietnam.  Such promises is partly what worries Japanese opponents of the bills.  Getting Japan entangled in the disputes of other countries could pull it into a conflict, perhaps with China.  On the other hand, the possibility of facing a regional network of security partners might restrain China’s aggressiveness.  After all, China’s own economic prosperity (tenuous as it has become this year) requires peace and stability.

Even with the enactment of its new national security bills, Japan seems unlikely to seek the active use of military force far from home.  After all, Japan’s debt-laden government is in no position to rapidly expand its self-defense forces without hurting its still-weak economy.  Moreover, the conditions under which Japan can use force to support American expeditionary efforts abroad are still narrowly circumscribed.  The new legislation may be a step toward a Japan that is more comfortable with the idea of the use of force.  But the road to an actual use of force remains a long one.  Ironically, China may be the one country that could propel Japan faster down that road.

Home » The Almost-Normal Country: Japan And The Use Of Force – Analysis