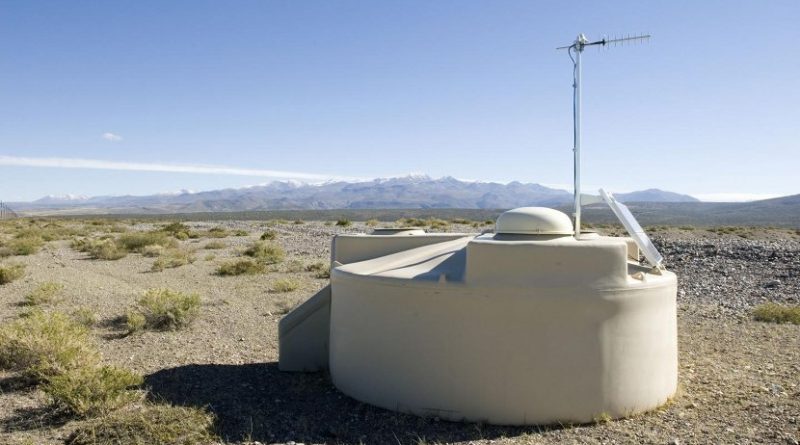 An Auger Observatory water-Cherenkov detector on the Pampa Amarilla in western Argentina. This material relates to a paper that appeared in the Sept. 22, 2017, issue of Science, published by AAAS. The paper, by The Pierre Auger Collaboration, and colleagues was titled, "Observation of a large-scale anisotropy in the arrival directions of cosmic rays above 8 × 1018 eV." Credit: The Pierre Auger Observatory

A new study reveals that cosmic rays with the highest energies that make their way to Earth originated from outside our Milky Way galaxy.

The results, derived from more than a decade of data collection, shed light on the origin of these rare ultra-high-energy particles.

Cosmic rays are atomic nuclei arriving from outer space that can reach the highest energies observed in nature – far beyond the capabilities of man-made particle accelerators. Those with the highest (exa-electronvolt) energies are especially sparse and difficult to detect; cosmic rays with such ultra-high energies have been known for more than 50 years, but the sites and mechanisms of their production remain a mystery.

The Pierre Auger Observatory, consisting of an array of particle detectors and a connected set of telescopes, was built near the city of Malargüe, Argentina, to investigate these particles. The large international collaboration which operates the observatory has analyzed data collected between January 2004 and August 2016.

During this time, thousands of cosmic rays with ultra-high energies were detected. Intriguingly, their arrival directions are not evenly distributed across the sky, but favor a certain direction. This alignment direction indicates that these ultra-high energy particles must have originated in other galaxies, the authors say. John S. Gallagher III and Francis Halzen discuss these results in a related Perspective.