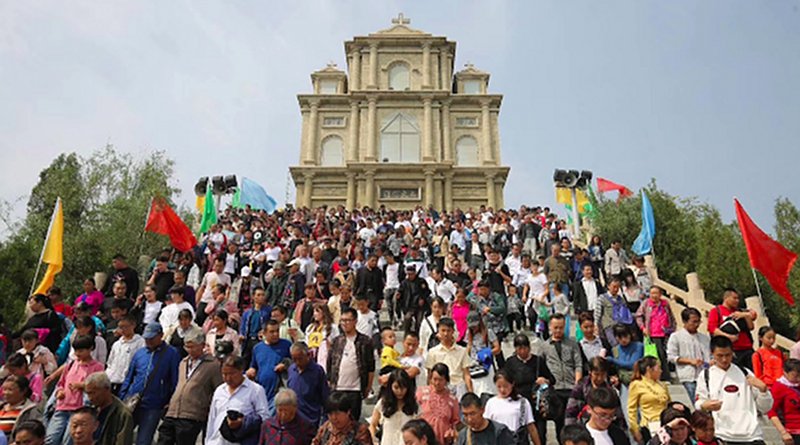 More than 10,000 Catholics celebrate the Marian feast day on Sept. 15 at the Mount of Our Lady of Seven Sorrows in northern China. (Photo supplied)

Taiyuan Diocese in landlocked Shanxi province of northern China has been told by local authorities to remove part of a Marian shrine complex near the town of Dong’ergou.

The demand spurred more than 10,000 Catholics to go to what is known as the Mount of Our Lady of Seven Sorrows on Sept. 15 to celebrate the Marian feast day.

Officials blocked roads and imposed other restrictions. About 100 Catholics, including the elderly and children, braved a storm to crawl up the mountain to pray at the shrine on Sept. 11.

A local source, who asked not to be named, told ucanews.com that the government asked Bishop Paul Meng Ningyou of Taiyuan on Aug. 26  to remove  the Gate of Heaven arch at the shrine within five days as the structure constituted  “unlawful land occupation.”

Bishop Meng is pressing for the decision to be revoked and a further determination is reportedly going to be made in October. There was apparently no official objection to the arch when it was erected several years ago.

However, the local source said he believed that government officials who visited last year viewed the location of the Gate of Heaven arch next to an expressway as too eye-catching.

Other dioceses in Shanxi province also received notices prohibiting their bishops and priests from going on the Mount of Our Lady of Seven Sorrows pilgrimage in an apparent attempt to isolate Taiyuan Diocese. Officials were keen to avoid embarrassing protests ahead of China’s Oct. 1 National Day commemorating formation of the Communist Party government in 1949.

Last year, statues of the Twelve Apostles on the Mount of Our Lady of Seven Sorrows peak, as well as a bronze snake and a cross further down, were reluctantly removed by Catholic Church officials as part of a so-far successful bid to save the shrine itself.

Situated 30 kilometers south of Taiyuan City and built in the 19th century, Dong´ergou Church is one of the oldest Catholic parishes in Shanxi. The nearly 1,300 villagers are all Catholic.

Along the road leading to the Marian shrine, there is a Way of the Cross with statues of saints and angels, but some of them have already been removed.

The following video shows Catholics crawling to the shrine: