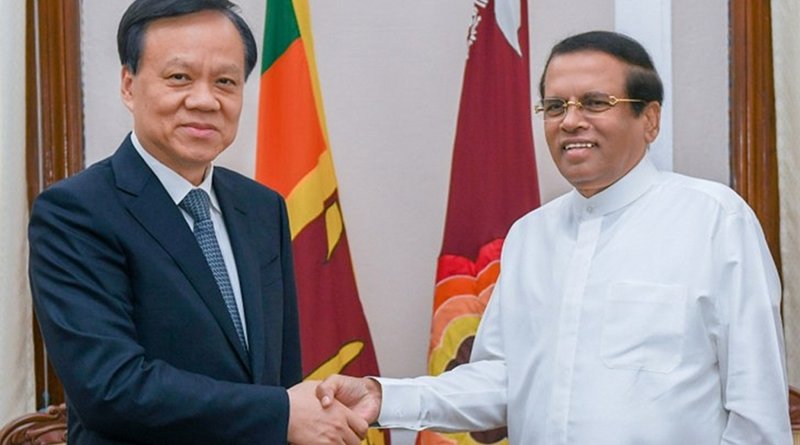 Member of the Political Bureau of the Communist Party of China (CPC) Central Committee, Chen Min-Er and President Maithripala Sirisena held this week a detailed discussion on a wide range of subjects on bilateral relations, economic cooperation and regional stability.

Mr Chen Min-Er and a CPC delegation called on President Sirisena at the President’s Office earlier this week, where Sirisena thanked China for the support extended to Sri Lanka for more than 60 years and made a special mention about the help given to defeat brutal terrorists by supplying modern weapons and standing with Sri Lanka at international forums. Sirisena added that this support will never be forgotten by the Sri Lankan people.

Mr Chen Min-Er thanked Sri Lanka for the early recognition given to Beijing since 1950s, accepting the ‘one China policy’ and starting trade relations under Rubber-Rice Agreement even before establishing diplomatic relations.

President Sirisena and Mr Chen Min-Er, referred to the successful visits of President Xi Jinping to Sri Lanka and President Sirisena to China and said that the visits have resulted in further strengthening close friendship and cooperation between the two countries.

They also discussed about increasing ties between CPC and Sri Lanka Freedom Party (SLFP). The CPC delegation requested the President Sirisena, who is also the Chairman of SLFP, to send a SLFP delegation to participate in the next CPC Convention. Vice President Nimal Siripala de Silva said that S W R D Bandaranaike founded the SLFP by incorporating the principle of middle path with the socialist policies of Chairman Mao Zedung. He said that the SLFP adapted the socialism and aligned it into the requirement of the Sri Lankan people.

Referring to Mr Chen Min-Er’s expertise in rural poverty eradication programmes, President Sirisena asked about poverty alleviation programmes in China. Mr Chen Min-Er explained in detail that since 2012, poverty was reduced through various programmes to empower rural masses. He said that President Xi Jinping has set out targets for officials to achieve poverty reduction goals within a time frame. President Sirisena acknowledged that the Chinese experience would be very useful to similar programmes in Sri Lanka to eradicate poverty.