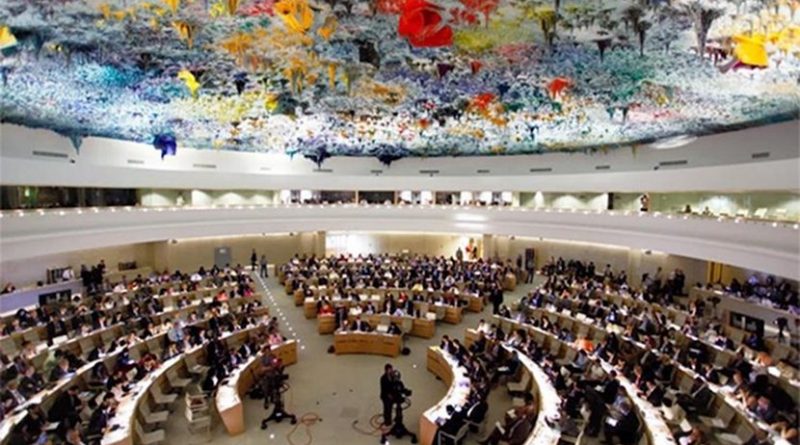 The US walked away the UN Human Rights Council, and authoritarian regimes write rules for a new world order.

The US absence from the UN Human Rights Council might have given authoritarian regimes more space on the world stage, allowing them to rewrite the very definition and rules of global human rights. For example, in July, 22 countries joined to condemn China’s repression of Uighur Muslims in the Xinjiang Province while 37 others released a letter defending Chinese conduct.

The United States should reenter the UNHRC, projecting its values and running for the 2021-2023 term in next year’s election. The UN Human Rights Council is made up of 47 states responsible for the “promotion and protection of all human rights around the globe.” Universal human rights are an indispensable pillar of the international liberal order and a vital national security interest.

After a year of complaints about the council’s deficiencies, especially about bias against Israel, the Trump administration announced in June 2018 that it was quitting the UNHRC. Nikki Haley, then US ambassador to the United Nations, labeled the organization a “hypocritical” body that “makes a mockery of human rights.”

Allies did not follow the US lead, and instead expressed disappointment and concerns.

The UNHRC has more resolutions targeting Israel than any other member state. Item 7 on Israel is a permanent agenda, diverting attention from other pressing human rights violators. Naturally, the United States does not want reentry to be perceived as endorsing this bias or damage its relationship with Israel. But the United States cannot allow a single agenda to hijack the full range of US-led human-rights initiatives, and absence could aggravate targeting of Israel. In the three years between the UNHRC’s founding in 2006 and the US entry in late 2009, six special sessions on Israel were held. In the nearly eight years after US arrival, there were two. US absence could encourage more actions from UNHRC delegates and even the International Criminal Court.

The Trump administration has already expressed deep support for Israel by recognizing Jerusalem as its capital, exiting the Iran nuclear deal and recognizing Israel’s sovereignty over the Golan Heights. Israel is not a member of the UNHRC either, and US reentry is unlikely to be an irreversible major diplomatic flashpoint.

The Trump administration had assumed that, by exiting the UNHRC, its lack of participation would delegitimize the institution and contribute to its demise. Without US input, the UNHRC has lacked resources to carry out some agendas, some of which undermine American interests.

About 60 percent of the budget for the Office of the High Commissioner for Human Rights relies on voluntary contributions, much of it from US allies that are susceptible to pressure from Washington. For 2019, the UNHRC has focused on investigations in Yemen, Myanmar, Syria, South Sudan, Burundi and the Democratic Republic of the Congo.

The UNHRC does grant membership for authoritarian regimes. Of the council’s current members, 14 are considered “not free” by Freedom House. The cohort includes some of the worst human rights violators such as Saudi Arabia, Egypt and China. Regional elections for UNHRC seats are often uncompetitive, with the number of candidates matching the number of open seats after internal bloc discussions. This feature is intertwined with the UN’s general policy of opening membership non-judgmentally to all nations.

Despite UNHRC’s problems, there are no alternative forums. At the UN Security Council, Russia and China exercise veto powers for autocrats, and huge voting blocs hinder human rights advocacy in the General Assembly. UNHRC is the most influential UN body that specializes in human rights, and is generally not perceived as a Western puppet for its criticisms of US allies and foes alike. The United States and its allies should aim for a careful, gradual reform of the system from within. Kenneth Roth has argued that the United States should criticize noncompetitive slates of candidates, publicly shame regions that don’t present a fair choice and encourage more democratic governments to join the slate. As US efforts are inevitably limited by the plurality of the UNHRC, the administration should combine unilateral foreign policy with presence on the multilateral forum. Washington could also consider linking aid with human rights, as the Obama administration did temporarily with the el-Sisi regime in Egypt after the 2013 military coup.

The United States should present its arguments from within the UNHRC. In recent years, the US and its allies successfully blocked some human rights abusers from entering the council, such as Iran. The United States also prevented a resolution that called for criminalization of religious criticisms in favor of freedom of speech. In recent years, Russia has been seeking to insert the notion of defending “traditional values” into the global human rights to agenda, presumably to persecute LGBT individuals. The US presence curtailed Moscow’s aspiration. After the US left the council in 2018, Russia unsuccessfully sought the seat. China, Cuba and Pakistan controlled the organization before the United States joined UNHRC and started placing a check on authoritarian regimes. Given that such issues are fluid even in Western democracies – and in the United States itself – it remains paramount that Washington vocally support rights of minority groups.

The US role in UNHRC, should it try to rejoin during President Donald Trump’s tenure, would be woven into the administration’s strategic framework of Principled Realism. The 2018 National Security Strategy defines the superpower competition with China and Russia as an ideological one. US global hegemony flourishes on the basis of liberal, democratic values. The Free and Open Indo-Pacific Strategy, designed to counter China’s rise, emphasizes cooperation with democratic allies to strengthen the rule of law, freedom of navigation and human rights in the Indo-Pacific region.

US reentry into UNHRC is not an idealistic, naïve move. Rather, such a decision would be based on a realistic interpretation of the competition to shape the future world order. How the world defines human rights in the coming decades is in the hands of major powers and the UNHRC. As Larry Diamond, professor at Stanford University, has claimed, the administration’s “disregard for democratic norms contributes to a growing and dangerous sense of license among dictators worldwide.” America’s absence in UNHRC allows revisionist forces such as China, Russia and Iran a free hand to rewrite the global norms on human rights. The United States should regain influence in the human rights debate instead of ceding the playing field to its rivals.

*Taehwa Hong is a research intern at the EastWest Institute and an opinion writer for Asia Times. His previous work has been featured in The Business Times, Huffington Post, The WorldPost, The Peninsula and YaleGlobal Online.

One thought on “The US Should Rejoin The UNHRC – Analysis”