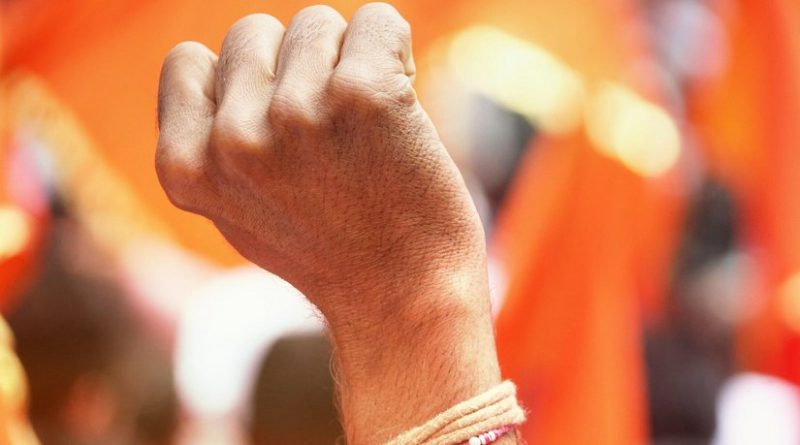 As people battle with the deadly Coronavirus, the world is sleep walking into an authoritarian future to keep capitalism alive with the help of brute force. The parliamentary and presidential forms of democracies are running the government without effective oppositions. The majoritarian governments in USA, UK, Brazil, India, China, Pakistan, Bangladesh and many other countries are busy in bending inclusive, secular and progressive rules and regulations to please global capital at the cost of people and their lives. The parliamentary, presidential, liberal and constitutional democracies are falling apart by breaking democratic traditions as outlined in the constitutional traditions.

The authoritarian politics is becoming the oxygen for the survival of capitalist economy and its profit driven system. The bourgeois cavalry of the ruling class is pushing democracy, democratic ethos, and democratic institutions into its temporary graveyard on which neoliberal authoritarianisms can flourish. It is not only about one country anymore. From Europe to Americas, Asia, Africa and Oceania, there are visible signs of rise of authoritarianism and its assault on democracy. There are attempts by the governments to normalise illiberal and undemocratic practices with the help of majoritarianism. The right-wing shift in democratic praxis is not new in the history. The authoritarian and anti-democratic forces have always tried to subvert democracy to regain their unfettered control over people and resources. It is argued that strong leadership and stable politics is essential for peace and prosperity.  Such a myth is promoted by the reactionary forces to continue their hegemony in different spheres of life.

The history is full of examples of both successful and failed democratic movements but never failed in promoting radical ideals, democratic values and cultures, whereas the tyrannical, reactionary and right-wing forces have always failed after their transient success. The undemocratic and authoritarian states and governments are spreading misinformation and fake news to keep people in dark about their diminishing freedom of choice in every step of their lives. The diversionary strategy helps to hide the failure of ruling classes and promote their failure as the failure of state, government and democracy. Both the weak states and compliant governments or strong states and powerful governments under dysfunctional democratic set ups are useful for the expansion of capital. The reactionary political regimes are allies of capitalist classes. These forces are using every opportunity and platforms to defame, discredit and delegitimise opposition political parties, democratic and progressive movements to create political climate, where politics becomes the ideology of ruling classes. It even uses judiciary to criminalise political opposition to the ruling establishments. These deceptive tactics has been used in different parts of the world to use crippled democracy merely as a poster hide reactionary politics and capitalist exploitation.

Democracy is a tool of social, political and economic transformation. Democratic deficit or crisis of democracy delays transformation towards progressive future. The world needs to embrace the urgency of mobilising a radical mass movement to revive, restore and consolidate democratic developments in a progressive path, where the culture of political opposition is not strangulated. The politics of dissent enhances democratic traditions and sharpens decision making processes. The opposition political parties are becoming inseparable from the ruling class ideology and policies. It looks as if they are the two sides of the same coin. The ineffective opposition or the absence of opposition diminishes democratic praxis.

The popular opinions based on believes are not always reasonable, objective, and scientific. Therefore, it is important for the majority to respect the minority voices based on progressive and scientific ethos. It is an important tool of checks and balances within a democratic system. The alternative to democratic failure is more democracy to be successful. The authoritarian regimes can never be an alternative to democracy and its abilities towards a progressive transformation. Both the essentialist and emancipatory logic of democracy and its critiques are central to decentralisation of power and authority to ensure democratic praxis for common good. The opposition’s questions and critique of the government is essential for social, political and economic transformation of governance mechanisms based on needs and desires of people. Such a democratic tradition and political culture allows multiple voices and exchange of different perspectives for larger goal of emancipation of people from different forms of structural inequalities and exploitation. The ideals of individual liberty, equality, justice and freedom are the gifts of democratic movements.

From the Solonian, Cleisthenesian and Ephialtesian traditions of Athenian democracy to Chartist character of parliamentary democracies with Westminster styles are products of working-class uprisings against ruling class authoritarianism and exploitation. The police brutality and unjust judiciaries have failed to protect the ruling classes and their undemocratic regimes. The Peterloo massacre in Manchester to anti colonial struggles in Asia, Africa, Americas and Oceania are testimonies to the sacrifice and struggles of common people to establish democratic politics that represents the interests of the masses. The distributive justice, liberty and equality are foundational and governing principles of these working class struggles for democracy.

Historically, the democratic struggles have used both ‘reform’ and ‘revolution’ as twin weapons of social, economic and political progress. The reforms are not working any longer. The survival of democratic ethos and principles are under threat now. The democratic state and governments are no longer representing the needs, desires, interests and aspirations of the masses. The states and governments are standing behind the global, regional and national capitalist classes and upholding their interests. The masses are suffering in hunger, homelessness, inequalities and multiple forms of alienation. This is a global trend and not confined within a particular territory and population. The forward march of this global trend needs to be halted for the sake of survival of human life, citizenship rights, dignity and peace in the world. It needs an internationalist approach with local actions and regional solidarity networks with global outreach acknowledging distinctive understanding of regional requirements based on people’s needs. The hegemonic universalism promoted by Eurocentric understanding of bourgeois democracy needs to be transformed and replaced by pluriversal democratic practices moving beyond empiricist electoral framework of majority or minority.