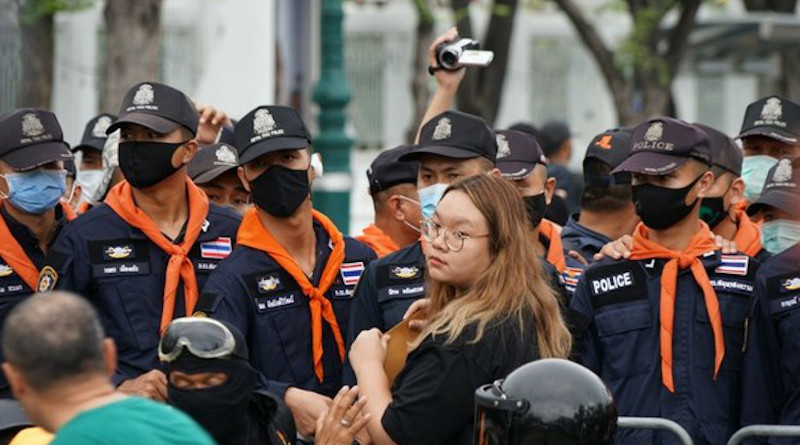 Pro-democracy protest leaders said Sunday that they had submitted a letter to Thailand’s King asking him to accept political reform as they wrapped up a two-day demonstration in Bangkok that drew more than 100,000 people at one point.

The letter asking the monarch to endorse reform of his own institution was unprecedented in a country where the king is considered semi-divine and safeguarded by laws that can land critics in jail for years.

Amid intermittent rain showers, about 5,000 demonstrators massed near the Privy Council building after many had stayed overnight on a nearby field reserved for royal ceremonies that they had occupied a day earlier. Thousands of unarmed police lined the roadways and blocked access to the historic buildings in the area.

Protesters had wanted to deliver the letter directly to the panel of advisers to the king but handed it instead to the metropolitan police chief because they were prevented from approaching the building.

“In fact I’m not satisfied with it but I accept that it was the best I can do,” Panusaya Sithijirawattankul, a protest leader who carried the letter, told reporters. “We will follow up with the response, if there is no progress made, we will see.”

Pakpong Pingpetra, the commander of the metropolitan police, said he would deliver the letter to the nation’s police chief as “the privy councilors are above politics.”

“We will inform of the progress,” Pakpong told Panusaya and nearby demonstrators.

The “open letter” addressed to King Maha Vajiralongkorn repeated demands sounded since the protest movement began in mid-July including the resignation of Prime Minister Chan-o-cha, a rewrite of the constitution, and reform of the royal institution itself. Using unprecedented language, it asked the monarch “to accept and act duly on our recommendations.”

“Make no mistake, the recommendations do not call for abolishing the monarchy, rather they are meant to maintain the monarchy and solve crisis in faith which currently affects your reign,” it said.

Earlier Sunday, protesters placed a plaque on the Royal Grounds where they had stayed overnight and said they were symbolically replacing one that went missing in April 2017 commemorating the 1932 Siamese Revolution that transitioned the country from an absolute to a constitutional monarchy. “Here the people express their views that this country belongs to the people, not to the king,” it said.

Police said they would file charges of trespassing and violating public gathering law, as well as possible charges under the Lese Majeste law, which criminalizes royal defamation with prison sentences of up to 15 years per offense.

“Investigator teams will watch taped speeches to see if they violate the institution or not. If so, there will be prosecution,” police Maj. Gen. Piya Tawichai, the commander of the metropolitan police bureau, told a separate news briefing.

Next rally announced for Sept. 24

Student leaders said they were planning their next rally outside the parliament building on Thursday to press MPs to revise the constitution, which activists said was written to preserve a military-backed government in power.

On Saturday, tens of thousands of pro-democracy demonstrators converged in the heart of Bangkok despite rain showers for the latest in a series of increasingly outspoken protests since mid-July. Protest organizers and police estimated Saturday’s crowd to be more than 100,000, making it one of the largest anti-government protests since street demonstrations rocked the Thai capital in the lead-up to a military coup six years ago.

After gathering at the Bangkok campus of Thammasat University – where a crowd of demonstrators forced their way through a locked gate – the protesters crossed the street to the Royal Grounds near the Grand Palace where a stage was set up for speeches by rally leaders.

“The fight doesn’t end in one day so all people must participate,” Parit Chiwarak, a Thammasat student and protest leader who is nicknamed “The Penguin,” told journalists. “We came to the Royal Grounds with our hands up to show that we are unarmed, so there will not be a clash.”

The Royal Grounds, known as Sanam Luang in Thai, have been closed to the public since the cremation of King Bhumibol Adulyadej (Rama IX) in October 2017.

“I reaffirm here: the monarchy is not an obstacle to democracy. Other countries such as England, Spain, Sweden and Denmark have royals and democracy, but Thailand’s king has too much power,” Parit said.

Another speaker, former Thammasat student Sirawit Serithiwat, told the crowds that the military had retained power since a coup in 2014 despite an election in April 2019.

“People are fed up with it. We can’t retake the democracy despite holding a new election, so we are exerting our power to oust the government,” Sirawit separately told BenarNews.

Prayuth, a retired general, was the top commander of the Royal Thai Army when he led the overthrow of the democratically elected government of Yingluck Shinawatra. Prayuth retained power after the 2019 general election and a rewriting of the constitution that allowed 250 hand-picked senators to vote for the top government office.

The prime minister made no direct comments on the demands voiced at the latest rally but, through a government spokesman, thanked everyone who helped keep it calm.

“Gen. Prayuth Chan-o-cha, the prime minister and the defense minister, thank officials and people who helped make the rally peaceful. The officials took good care of the demonstrators and avoided confrontation and provocation to not create tension,” Anucha Burapapichaisri told the media.

On Thursday, Prayuth had warned that a large-scale gathering could lead to a spread of COVID-19 – Thailand has seen about 3,500 cases since the outbreak began.

“When you gather in mobs you are creating an enormous risk of new infections,” the prime minister said on Sept. 17. “And with that, you also create enormous risk to the livelihoods of tens of millions of fellow Thais.”

Kittipan On-chan, a student from Ubon Ratchathani in southeastern Thailand, said he was happy about the huge turnout for the weekend rally.

“I take what is happening as a candle-lighting which will lead to future victory,” he told BenarNews.

In the final speech of the rally on Sunday, student protest leader Parit called the handover of the letter the “greatest victory” of the protest movement thus far.

“It proved that people, ordinary people, can submit a letter to the royal family. This is the greatest victory we have achieved so far. We can talk and use normal Thai language. We have proof that everybody is human,” he said.

Titipol Phakdeewanich, dean of the Faculty of Political Science of Ubon Ratchathani University called the weekend rally a landmark in Thai political history.

“I don’t think there would be any quick changes but it is the important landmark for calls for changes in the nation’s power structure, a demand that want the monarchy to be integral part of the democracy,” Titipol told BenarNews Sunday. “The change could be achieved when this generation grows up and succeeds the older conservative generation.”

Prominent right-wing politician Warong Dechgitvigrom had a different view, calling the actions of the protesters inappropriate.

“It didn’t achieve anything,” Reuters news agency quoted him as saying. “These actions are symbolically against the king, but the king is not an opponent.”

The demonstrations began on July 18 when thousands gathered at the Democracy Monument in Bangkok while thousands more gathered the next day in northern Chiang Mai province.

Since then, pro-democracy crowds have gathered across the nation in a series of protests. During an Aug. 10 rally, demonstrators released a list of 10 demands including a call to diminish the power of the monarchy through a change to the constitution.

Prior to this weekend’s events, police arrested 14 activists on a series of charges including sedition, organizing gatherings of 10 or more people to incite unrest, and leading mass gatherings that could spread COVID-19, while 15 others turned themselves in to law enforcers. Anon Numpa, a human rights lawyer and a leader of the protests, has been arrested three times.