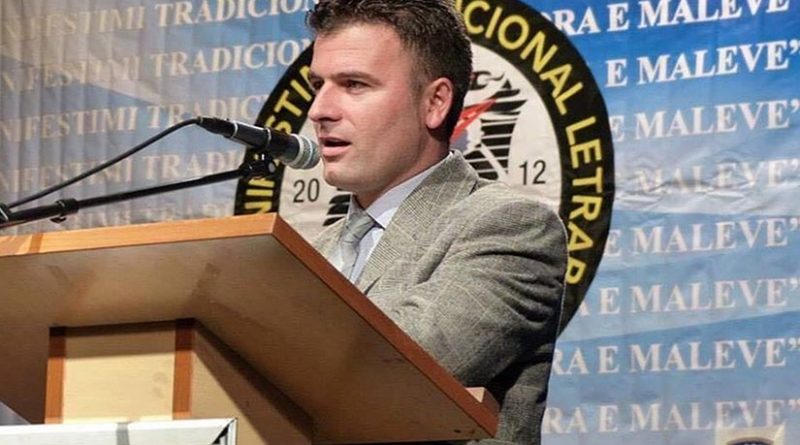 On all nations and at all times it is easier to portray gods (neither friends nor enemies would criticize the images) than, for example, people… Fewer people had seen gods, which is quite opposite to the commonality of observing the men who are so close, though sometimes far away in space and even time.

That is why it is so easy and at the same time so difficult to create the adequate portrait of humans in paintings, clay, or words without elevating them as gods and also without downplaying them as demons.

In such a situation I find myself, facing the challenge [binding myself by commitment] to convey to the Ukrainian readers, at least in a schematic way, the creative world of Albanian poet Jeton Kelmendi who is already a well-known writer in the world and with whom I am acquainted through his texts, without seeing him, as well as I have only seen him through a myriad of cultural images familiar to his homeland, which sounds very poetic to me – Albania…

Since I take close to heart and mind the formula of Goethe the genius “Who wants to know the world of a poet – let them go to his country”, I understand and apologize in advance for all the creative approximation in my portrait of a fellow writer who has a romantic biography, stack of printed books, multi-level awards, ranks and titles, and with whom, I feel, we have much in common regarding the ways we embrace life… Although I never shook his hand in his ancestral aristocratic nest on his country that gives roots and wings to his poetry.

Therefore, learning more about Jeton’s creative manhood, I was able to better understand the attractive feminine charm of Albania and – vice versa. By “learning” I mean knowledge and reasoning, as well as intuitive feelings, a conscience in the highest spiritual coordinates. For literature, especially poetry; is the history of human emotion.

As for the poet’s homeland, the Republic of Albania is a country in the western Balkans on the Adriatic and Ionian seas. Its closest neighbours are (“tell me who is your neighbour and I’ll tell you something about yourself…”) Italy (through the Strait of Otranto); in northeast it is Serbia, Kosovo; Montenegro is to north-west; Republic of Macedonia is to the east; and Greece to south and south-east. Only the list of names awakens in souls of our consecrated contemporaries a whole bunch of lyrical, dramatic, and sometimes tragic associations.

Jeton Kelmendi writes in Albanian, English, French, and Romanian languages and he is not a stranger, as often happens with real poets, also to other literary modes and genres, such as prose, drama, journalism, the translation… As for the iconic facts that make up and mark the context of Jeton Kelmendi’s creative life, it is worth noting that he was born in Peja (Kosovo) in 1978, graduated from the department of mass communications at Prishtina University, and then studied at the Free University in Brussels. He participated in the Kosovo Liberation Army during the War of Kosovo of 1998-1999… This latter biographical feature especially touched me and became a psycho-philosophical reference point-magnet in the perception of myth and poetic world of Jeton Kelmendi, whose book of poems “On the Top of Time” was published recently in Ukraine, translated by remarkable poet Anna Bahryana and published in the publishing house “Tverdynya” (“Stronghold”) in Lutsk.

War puts everything in its place within the highest hierarchy. And what war gives to human soul is stress, trauma, simultaneously joy and suffering (according to Lorca), which are under the aegis of love, hate as love, and love as hate. The situation of war often calls for treatment with prayer or poetry, and with prayer that is poetry and poetry that is prayer …After all, if poetic argumentation of the world is a great hypocrisy for someone, for others it becomes life and death.

This is why it is so important how our neighbours on the planet are praying or write poetry – because with this knowledge we can examine ourselves in deeper and subtler way, which also means learning about the One who will call us again, for a meeting with the eternity, after calling each of us out of mother’s womb … out of distant above-Earth dimensions.
It is difficult, of course, to deal adequately with poetry in translation, but knowing well the work of a translator Anna Bahriana and taking into account the impact of social, political, natural, ethical, ethnic, and aesthetic context – we will be able to see, feel, and understand what is crucial and serves as vector, “vertical”, and the core senses. In order to take these central points for ourselves and carry on …not as medals of gold or steel, but as something soulful and spiritual, experiential, painful, transformed into a quiet warm light of worldwide sorrow and innate joy derived from the fact that we are here, that we are sometimes pulsing in unison …in spite of everything.

And just a poet the mythmaker as no one else becomes a poet the peacemaker, when politicians confidently and stubbornly push our common world into the abyss of the apocalypse, with its features of disillusionment and estrangement not surprisingly presented in this book:

I do not believe anything,
Even the words
That you speak from the heart
(“The Walled Dream”)

While reading these texts of free verses in the book, I was trying to understand precisely to whom they are addressed cordially – …a sweetheart? Albania? The Almighty God? … Obviously – to all and everything at the same time, with some prevailing senses and prerogatives in each particular poem of ragged rhythm, hints, and the rhyme-webs.

Although most often, it seems to me, they are letters of a man with music in the soul to his beloved Muse and they extrapolate on imaginary conversations of Adam and Eve who had just lost the paradise…

The endings in his poems are expressive and conceptual, for example: “And this whole long journey // was it necessary just for // To come to myself”, and epigraphs refer to existential wisdom (“Now I came to myself and I can live with the angels” (Mother Teresa)).

Mother Teresa (Agnese Ґondzha Boyadjiev (1910 -1997)), whose “Prayers and Commandments” are always with me (like this one – “If you succeed, you make imaginary and real enemies. Yet still, look forward to success!”), by the way, was also Albanian … which let me better feel and understand the Albanian poet.

Jeton dates and geographically determines his poems: “District Auderghem, Brussels, and February, 2007”. They have a lot of footnotes, explanations, indicating the historiography specificity of his lyrics.

Finally, whatever he writes about, everything in his texts, like in writings of every true poet, can be globally reduced to three main themes and ideological spectrums: love, space, homeland:

My Godly Motherland that called me
Albanian…

In some poems and lines, these themes are symphonically combined together in one single liturgy of feelings, and they sound as sacred saga of gratitude to the Almighty for our being here, pulsing, aching, and shining:

My beloved,
Beauty and poetry merge into one stream
For you and for the country
(Paris, March 28).

Sometimes his poems appear to be concise but meaningful everyday dramas, created, in fact, by the laws of the scene with all its actions, introductions, payoffs, and culminations:

Action first
Maybe
Yesterday there was just too much
And you do not even remember
Where lies the boundary between
Sadness and joy
We had to walk
This way,
From somewhere — and to somewhere
……..
Action third
Today, we do not blame each other.
Buy a ticket for a long journey…
At each station
Of the written
You will find commas
For yourself
And question marks – for me.

Jeton Kelmendi is dancing his white dance with the words in his spiritual quest around apocryphal religious truths, once paying more attention to society, then poetry and politics, even macro-politics with their sacraments and revelations go together, creating the effect of hologram depth, making the poet a mirror of national space which exists by rules established by man, the other time, on the contrary, he regards nature that exists under the laws of God.

So mature as a poet, a man, a human being Jeton Kelmendi in his poetry and life creation becomes a philosopher, not a poet-lover, but a poet-guru, gourmet, who, for sensing the taste of wine and life does not need to drink the whole bottle, but quite a few delicate sips, because he is not afraid of the boundary manifestation of all things – aging … death, as evidenced by his poems such as “About my thirst, about her thirst,” “Life over oneself”, “Path to the own self”, “Memory in verse.” The latter one is probably one of the most penetrating pieces approaching matters of Eros and Thanatos

There, under a large stone
You will not find me anymore
I became its shadow
There, over the yellowed grass,
Only the content remained
How strong have you been, dear
When you said you would not move a step
Whilst you see me
Months were passing,
Seasons, years
Honey, how strong you were
Soft poems and wild poems
Words no longer have blood
Do not speak any more
About all that we had in common
Only one poem
Take off the top of time…

One verse that might become a song translated into different languages, including Ukrainian, one Albanian woman who is Mother Teresa, one poet-warrior, and one Albania on our common planet Earth, one Word which is Logos, and another Word that is God…

All of these are enough in order to feel the continuity of life and be eager to live with dignity and a feeling of flight, praying with poems and feeling prayers as poetry, as do all the true poets of the world, among which undoubtedly Jeton Kelmendi, whose writings give a chance and hope to the close souls for meeting soon on top of time – space…