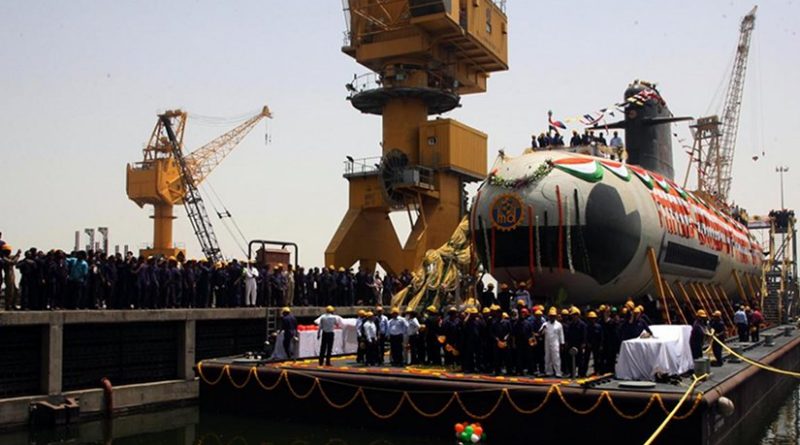 India's NS Kalvari at the Mazagon Dock Limited on the day of her undocking. Source: Indian Navy, Wikipedia Commons.

India’s submarine construction programme has been jeopardised by a major data leak of its French-designed Scorpene submarines. The future of its new generation submarines under the Project 75 (India) contract has also been thrown into doubt.

India’s submarine construction programme has been given unwelcome exposure by the wide-ranging data leak of its French-origin Scorpene submarines by The Australian newspaper. It has also raised questions about the Indian Navy’s Project 75 (India) for the construction of six new generation stealth diesel-electric submarines.

The 22,400 leaked pages, hosted on the New South Wales paper’s website on 24 and 25 August 2016, detailed the combat capabilities of the Scorpene 2000 SSK diesel-electric hunter/killer submarines. Six of these vessels are being built under the Indian Navy’s Project 75’S 2005 Transfer of Technology agreement between DCNS, the French contractor in naval defence, and the Mumbai-based state-owned shipyard Mazagon Dock Limited (MDL). The first of this series, construction on which began at the MDL Yard in December 2006, was to have been launched in September 2016 but is now delayed, its commissioning scheduled a year after its launch, with subsequent boats to be delivered at intervals of nine months.

The programme is running four years behind schedule, its original contract cost of US$2.63 billion in 2010 having spiralled to $3.8 billion. The cost includes a $1 billion Technical Data Package for MDL to gain competence in submarine construction, especially in the field of hull fabrication, outfitting and system integration.

Besides the question whether India’s security is under threat as a result of the data leak, another question concerns the motive of The Australian in exposing a friendly nation’s defence agenda, Indian commentators opined. Coincidentally, Canberra in April awarded the same French defence contractor DCNS a $38 billion (AU$50 billion) contract to design and build 12 new -generation submarines. That was after the Type 216 diesel-electric submarine of the German defence contractor, Thyssen Krupp Marine Systems (TKMS), lost out to DCNS’ Shortfin Barracuda in the bidding for the Australia contract.

Indian naval authorities downplayed the leak of the Scorpene submarines affirming it did not compromise national security. They viewed the issue as a temporary setback, noting that it involved largely generic data and information removed in 2011. However, such comprehensive disclosure as by The Australian would divulge confidential information and provide convenient levers to a rival company as well as to a rival navy.

Though he termed the leak as one of “concern”, Australian Prime Minister Malcolm Turnbull did not refer to the damage it might cause India’s defences or even The Australian’s culpability in this regard; he instead specified that the Indian Scorpene was a model different from the one Australia was buying. According to DCNS, the 97-metre 4000-tonne Shortfin Barracuda designed for the Australian Navy was the world’s most advanced conventionally powered submarine with state of the art technology, propulsion and hydroplanes and most powerful sonar.

India has taken up the matter with the French Government, requesting it to investigate it with urgency. It was not a leak, said a naval official, but a theft that took place overseas. They had not found any DCNS negligence, but identified some dishonesty by an individual. The Australian reported the secret data were stealthily drawn from DCNS by a former sub-contractor in 2011 and taken to a private company in Southeast Asia before being passed on to a branch of that company in a second Southeast Asian nation. A compact disk containing the data was then posted in regular mail to a company in Australia.

DCNS took the issue to the highest court of New South Wales that directed The Australian to withdraw the documents published on its website and desist from publishing any additional documents. DCNS also filed a complaint against unknown persons for breach of trust before the Paris Public Prosecutor. The French contractor is perturbed.

Apart from having set up its subsidiary DCNS India in Mumbai for building the Scorpene, it is now establishing another fully-owned subsidiary to produce Air Independent Propulsion (AIP) technology for submarines. The AIP allows a non-nuclear submarine to remain under water three times longer than one without it. An AIP is under indigenous development by the Indian Naval Material Research Laboratory. The AIP might be subsequently retrofitted during the scheduled major overhaul on the Scorpene.

DCNS Bidding For Project 75(I)

DCNS seeks to produce an AIP in India that would be deployed in all future submarines in the country. DCNS is also keen on bidding for the $11.1 billion Project 75 (I) contract for the construction of six new generation stealth diesel-electric submarines. Defence-oriented enterprises with warship-building facilities are priming themselves for the bidding for the tender to build the submarines in India at recognised shipyards. The Indian Navy has scotched speculation of a follow-on order to DCNS for the construction of three more Scorpenes.

Meanwhile, Germany’s TKMS is negotiating with India for a possible government to government deal for six of its 1,800 tonne Type 214 diesel-electric submarines that are equipped with AIP systems developed by Siemens and based on polymet electrolyte membrane hydrogen fuel cells. Germany has been keen on supplying its submarines to India. TKMS is expected to bid for the P-75(I) tender for which competition will be fierce from Spain, Sweden, Russia and Japan. TKMS will no doubt redouble its effort in India after failing to back the Australian deal that went to DCNS.

In rejecting the TKMS bid, Canberra informed Berlin that its 3,810-tonne Type 216 submarine that it had offered had an “unacceptable level of radiated noise”. It was reported that DCNS, the successful French bidder, had managed to influence Australian officials about the noise levels of the TKMS submarine.

*Sarosh Bana is Executive Editor of Business India. He contributed this to RSIS Commentary.