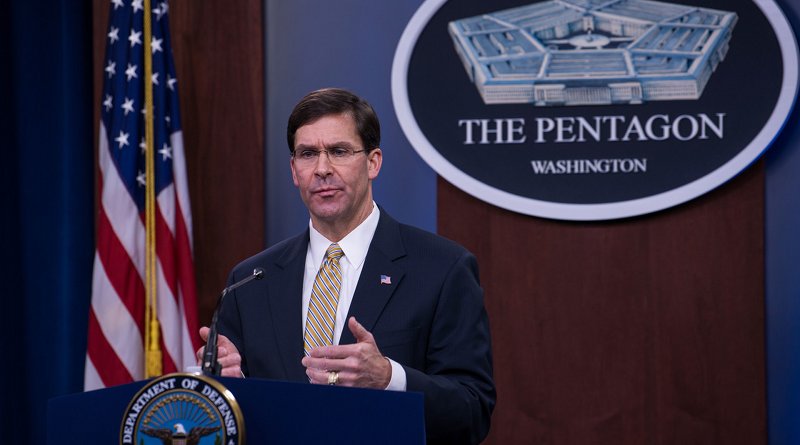 As America’s strategic competitors modernize their own armed forces and continue to ignore international law, violate the sovereignty of smaller states and shift the balance of power in their favor, the strength of U.S. military alliances and partnerships becomes even more important.

Earlier this month, Defense Secretary Dr. Mark T. Esper signed the “Guidance for Development of Alliances and Partnerships.” The GDAP is a comprehensive approach to strengthen alliances and build partnerships, Esper said today while speaking at the Atlantic Council in Washington, D.C.

“In the past, our international engagements were guided by regional priorities and interests,” Esper said. “But we are now in an era of great power competition that is global in nature. This reality requires a common set of priorities across the Office of the Secretary of Defense, the Joint Staff, the services and the combatant commands, that will drive our interactions with our foreign counterparts and improve our effectiveness.”

The GDAP, he said, will help the department prioritize, align and synchronize security cooperation activities; better articulate the needs for ally and partner warfighting roles; focus efforts to help partners shape their militaries into more capable forces and measure and track progress across a wide range of tools available to the Defense Department.

Esper said across the department, military and civilian leaders meet with foreign counterparts all the time. In the past year, he said, he’s conducted more than 200 such meetings in over 60 nations. But that those meetings are not on their own enough, he said — each must prove to be of value. Until now, he said, there’s been no effort to determine that value.

“Previously, we did not have a central repository for tracking senior leader engagements across the enterprise, let alone directing them, and then measuring progress against our collective goals,” he said. “It is very difficult to improve a process — let alone a relationship — if you don’t have a goal, and you don’t measure it. Nor can you make a resource like key leader engagements more effective in strategic competition if you don’t monitor and assess it.”

Now, he said, the department is tracking and analyzing the effectiveness of senior leader engagements with foreign military counterparts. This effort will allow the department to prioritize engagements, establish a common set of objectives and chart progress with each country, he said.

“One of our best means for strengthening existing partnerships and cultivating new ones is education and training programs, especially those run right here at home,” he said.

Already, the U.S. provides allies and partners with access to nearly 400 U.S.-led professional military education courses. But more can be done, Esper said.

“I have asked the department to find ways to expand the programs with the highest potential for enduring impact, increasing their student participation by 10 percent in fiscal year 2021, and over 50 percent between fiscal years 2021 and 2025,” he said.
Esper said Congressional support will be needed to help make that happen.

Another aspect of partnership building, he said, is the National Guard’s State Partnership Program. That program, started in 1993, he said, is ready for possible expansion.

“This program was designed to build relationships with former Soviet Bloc nations,” he said. “Starting with just three partnerships in the Baltics, today it boasts 82 around the world — and each U.S. state, territory and the District of Columbia has at least one partner.”

Right now, he said, the State Partnership Program is poised to add four new partners to its roster. He also said he’d like to increase participation by an additional eight nations by the end of 2025.

“To support this we are looking at increasing funding and making those resources more consistent and predictable,” he said. “At the same time, the program must also shift its focus to frontline and emerging partner nations to compete with China and Russia. We will undertake an independent strategic evaluation to look at all existing partnerships to help us find efficiencies and increase the effectiveness of this important program.”

As with international professional military education, he said, expansion of the State Partnership Program will need assistance from Congress.

Finally, the U.S. increases relationships with partner and allied nations through foreign military sales. In fiscal year 2019, he said, FMS amounted to more than $55 billion. In the Indo-Pacific region, he said, more than $160 billion worth of FMS projects are now underway.

“The strength of foreign military sales as a tool for advancing our relationships is equal to its potential for unleashing our domestic industrial base for innovation at home and strategic competition in the global marketplace,” Esper said.

“We must compete with China and Russia, whose state-owned industries can fast-track military exports in ways that we cannot — and would never want to, in many cases,” Esper said. “We set out to reform our approach to make the United States more competitive in the global marketplace and to strengthen our cooperation with allies and partners.”