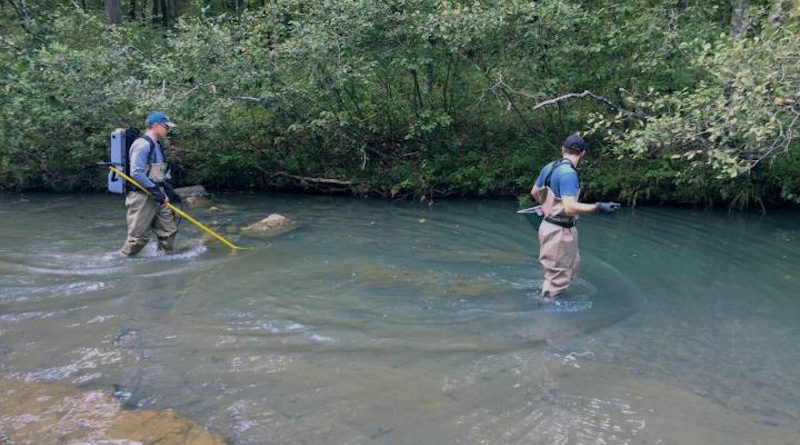 Researchers collected over 800 fin samples from smallmouth bass at 43 different sites in the Central Interior Highlands and analyzed the samples for genetic diversity. CREDIT: University of Missouri

For recreational fishing enthusiasts, the thrill of snagging their next catch comes with discovering what’s hooked on the end of the line. In many freshwater streams and rivers — across the central and eastern parts of the U.S. — anglers are often catching a popular freshwater game fish: the smallmouth bass. Now, scientists have discovered a new level of biodiversity within that species.

Previously, scientists identified two subspecies of smallmouth bass: the widespread Northern smallmouth bass and a much smaller subgroup called the Neosho smallmouth bass. The Neosho are native to an ecologically isolated region of the lower Midwest known as the Central Interior Highlands, which weave through southwestern Missouri, northern Arkansas and northeastern Oklahoma.

To help the conservation departments manage the present diversity of this smaller subspecies of smallmouth bass, two University of Missouri researchers — Joe Gunn and Lori Eggert — worked with the Missouri Department of Conservation, Oklahoma State University’s Department of Natural Resource Ecology and Management and the Oklahoma Cooperative Fish and Wildlife Research Unit of the U.S. Geological Survey at Oklahoma State University to collect over 800 fin samples from smallmouth bass at 43 different sites in the Central Interior Highlands. The MU researchers helped analyze the samples for genetic diversity.

“Management is necessary because this is a gamefish,” said Eggert, a conservation biologist and professor emeritus in the Division of Biological Sciences in MU’s College of Arts and Science. “Human actions have already strongly affected the species and will continue to do so. This management generally takes the form of ‘stocking’ to enhance opportunities for recreational anglers. If the source and subspecies of fish used in stocking particular streams is not considered, stocking events could lead to ‘genetic swamping’ of the local fish. In some cases, this could lead to one subspecies dominating the other in streams outside its native range. Letting ‘nature take its course’ is not an option.”

For years, Eggert has studied the ecology and evolution of animal populations, including most notably African forest elephants. She originally wanted to become a veterinarian, but her passion for conservation biology developed while in college and grew as she served as an intern in the genetics program at the Zoological Society of San Diego. There, she was able to learn about conservation efforts on behalf of species such as the Przewalski’s horse of Mongolia and the giant panda in China.

Eggert knows a proper understanding of the genetic diversity of animal populations is important when managing these populations.

“With the Neosho being a native fish to the Central Interior Highlands, this study highlights the importance of thinking about management actions when moving fish between streams,” Eggert said. “In the past, it’s just been ‘a fish is a fish,’ and hatcheries were providing fish without anyone first considering where these fish are originally coming from. It’s not just ‘a fish is a fish.’ A fish being added to a Neosho stream should really come from a Neosho stream. We also need to look at which Neosho stream is involved, because each may be home to a genetically different population, and we don’t quite know yet how important the mixing of these different genetic populations is to their overall health within an ecosystem.”

Gunn, a graduate student in MU’s College of Arts and Science, is currently working toward a doctorate in the Division of Biological Sciences, with an emphasis in conservation biology. Since he was little, he’s always loved nature, and enjoys thinking about complex concepts in ecology and evolution. He wants to use his knowledge and understanding of animal species to make a positive impact on the management and preservation of threatened species and their environments.

Gunn said this study shows there is considerable diversity within the smallmouth bass family.

“Our methods have been used before to identify previously unknown lineages of animal populations,” Gunn said. “This can be applied to species within any group, whether it’s mammals, fish, reptiles or birds. There are also very interesting dynamics between different groups, and these same methods can also be used to identify genetic structures and morphological differentiation within a specific species. Here, we’ve found considerable diversity between the two known subspecies of smallmouth bass, the Neosho and the Northern smallmouth bass, the latter of which can be found in a larger area of the U.S.”