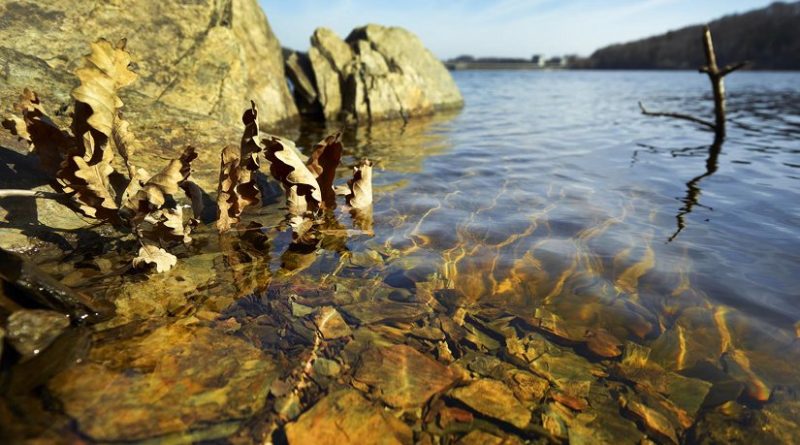 The Rappbode reservoir in the Harz region -- it also is affected by the increasing brown colouration of the water. It is one of 36 reservoirs in Germany which have been studied by UFZ scientists in order to identify the causes of increasing brown coloration. Credit: UFZ / André Künzelmann

Due to the burning of biomass and fossil fuels and, above all, due to agriculture, excessive quantities of reactive nitrogen are still being released into the atmosphere, soil and water — with negative effects on biodiversity, the climate and human health.

However, a differentiated analysis of nitrogen input pathways from the different sources reveals significant differences. While nitrogen inputs into soils — primarily due to agriculture — have elevated nitrate concentrations in the groundwater of many regions to values above the threshold of 50 mg per litre, atmospheric pollution is decreasing in large parts of Europe and North America due to emission-reducing measures. This means that less nitrogen is released into soils and water via atmospheric depositions.

Long-term measurements over the past 20 years clearly indicate that this is the case in Germany: On average 35 mg less atmospheric nitrogen was released into the soils per square metre per year. According to studies conducted by UFZ scientists, this leads to 0.08 mg less nitrate per litre per year entering streams and drinking water reservoirs.

“It does not sound like much, but in a number of natural areas not or hardly impacted by industry and agriculture, pre-industrial conditions will set in over time,” said UFZ hydrogeologist Dr. Andreas Musolff. “At less than 6 mg of nitrate per litre of water in some cases, conditions are far from the problematic nitrate concentrations measured in regions heavily impacted by industry or agriculture.”

That this positive development can also have negative implications became apparent when scientists started studying the causes of a brown coloration of water in reservoirs increasingly observable in Germany, northern Europe and North America. This brown coloration is especially problematic for drinking water treatment.

In reviewing various hypotheses, they noted that the brown coloration of the water was strongly correlated with the decreasing concentrations of nitrate in the riparian soils surrounding the tributary streams of the reservoirs. This is due to the fact that the presence of nitrate in the riparian wetlands where most of the stream flow is generated ensures that carbon, phosphate and various metals remain bound to oxidised iron. Lower nitrate levels allow a chemical reduction of iron compounds and thus the mobilisation of previously adsorbed substances. Thus, compounds previously bound to soil particles become mobile and are released into the streams with the rainwater.

In the case of carbon this means that the concentration of dissolved organic carbon increases and is visible as the brownish color of the water. In just under 40 percent of the 110 tributaries of drinking water reservoirs that were studied, the scientists found significantly increased DOC concentrations with an average of 0.12 mg more DOC per liter per year. The most significant increase was found in natural, forested, where nitrate concentrations in the water were less than 6 mg per liter.

In addition to DOC, phosphate concentrations are also increasing significantly in over 30 per cent of the tributaries. The calculated average 7 μg per litre per year tends to favor algae growth and is equally problematic for water quality in the long run. There is evidence that not only DOC and phosphate, but also adsorbed metals such as arsenic, vanadium, zinc and lead are increasingly becoming mobilized.

“We solve one problem by making the air cleaner, but in turn create a different problem in other areas,” said biologist Dr. Jörg Tittel, head of the project at the UFZ, explaining the unexpected effect. “None of the dissolved substances is toxic at this low concentration and the substances are also largely removed by water treatment. However, water treatment is becoming more expensive.”

Initial evidence confirming this hypothesis was provided by the evaluation of data collected for a small 1.7 km2 catchment in the Erzgebirge mountains near the Wilzsch, a tributary of the Zwickauer Mulde, which flows into the Carlsfeld reservoir. Thereafter scientists chose a much larger scale, focusing on 110 streams and their catchments entering a total of 36 drinking water reservoirs.

Despite a much greater diversity in terms of the size of the streams and their catchments, their topography, the amount of precipitation, land use and the chemical characteristics, the hypothesis could be confirmed based on this much larger data set as well: The observed increase in DOC is closely correlated with the decreasing amount of nitrate in the water.

In the meantime a discussion has begun as to how the results of this meta-analysis can be translated into practical measures to halt the increase in DOC, in partnership with the relevant authorities.

“The study helps to focus future research on the relevant processes and to plan appropriate field experiments that further improve the basis for decision-making in terms of concrete measures,” said Andreas Musolff.