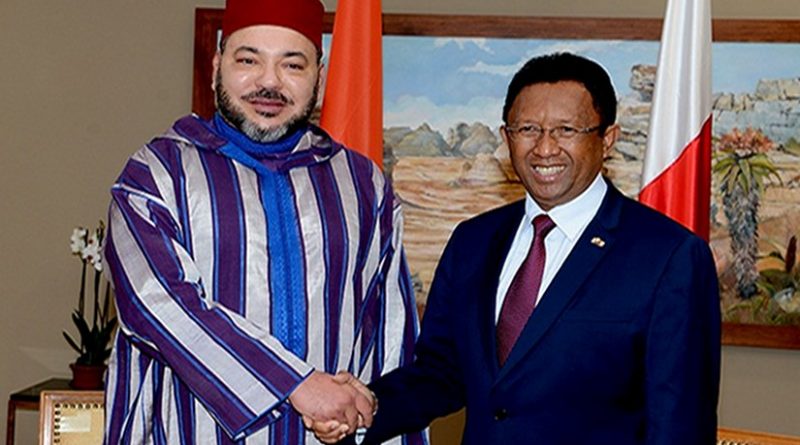 On November 20, King Mohammed VI arrived in Antananarivo for an official visit to Madagascar, the second leg of a tour that also led the Sovereign to Ethiopia, and which will also lead him to other African countries.

Upon his arrival at Ivato international airport, HM the King was greeted by President of the Republic of Madagascar, Hery Rajaonarimampianina.

The visit to Madagascar is not a surprise to anyone, as the Moroccan royal family enjoys close and historical relations with this country. In fact and in August 20, 1953 King Mohammed V (King Mohammed VI’s grandfather) and his family were exiled to Madagascar, where they remained for 3 years. In Nov. 16, 1955, the Sultan regained Morocco and was greeted by delirious crowds. On March 2, 1956, Morocco received its independence after active opposition to the French protectorate. In February 1956 he successfully negotiated with France for the independence of Morocco.

Hence, King Mohammed’s current official visit to Madagascar has a historical significance and will certainly be full of wonderful memories especially when the king will visit his grandfather and family residence in Antisrabe during the exile years. This Royal visit will also be an opportunity to show gratefulness to the Malagasy people who hosted the royal family in the 50’s.

It will also provide provide opportunity to consolidate further the historical longstanding relations binding Morocco and Madagascar and to give a new momentum to investments, both at the level of state-owned companies and at the level of the private sector.