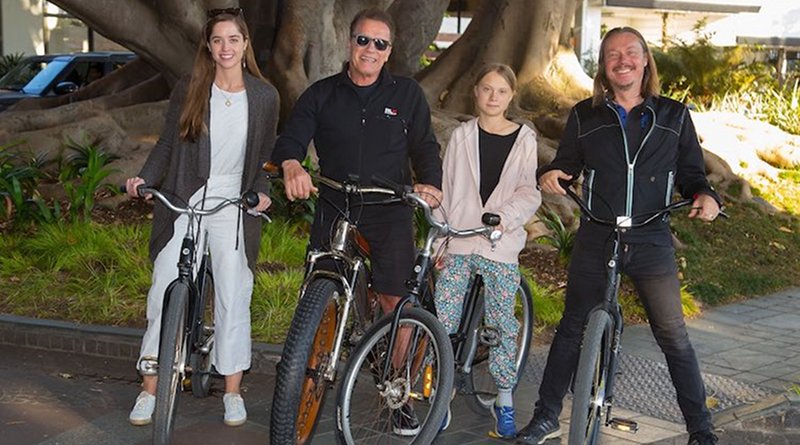 Greta Thunberg and Arnold Schwarzenegger are two names uncommonly seen together, but they made November headlines after sharing a cycle ride together. Generations apart and from wildly different backgrounds, it would be easy to think the two would have little in common, but they share a passion about fighting climate change, and together illustrate its impact on everyone, no matter what their age and background.

Greta Thunberg’s commitment to keeping her carbon footprint as low as possible on her global travels met with Schwarzenegger’s emphasis on public health in the face of climate change as the two cycled around Santa Monica together. While the ride did much for publicity, it also helped to illustrate a larger point: that cycling has an important role in the global fight against climate change.

According to Max Glaskin, author of Cycling Science, one ton of carbon is generated for each $1,000 spent on producing bicycles. The car industry fares 45% better than this, but $1,000 produces a far greater number of bikes than it does cars, so ultimately the carbon footprint of bicycle production is much smaller. Once a bike makes it to the road, a cyclist consumes 42 times less energy than a car driver, 34 times less than a bus passenger, and 27 times less than they would if they traveled by train.

In the UK, a report by Dr Rachel Aldred and commissioned by British Cycling found that if 10% of car journeys were switched to bike journeys, air pollution would be so reduced that 400 productive years of life would be saved. If as many commuters as possible were to switch to using a bike for their journey to work just once a week, air pollution would be significantly reduced.

Furthermore, the cycling speed possible on a road bike and the density of commuter traffic is likely to cut both time and cost for the commuter, as well as benefiting their health.

In an increasingly sedentary world, cycling to work offers commuters a wealth of health benefits. It provides an aerobic workout, which can contribute to improved heart health and a healthy brain, while simultaneously building muscle and increasing bone density. The benefits extend beyond the cycling trip itself, contributing to improved balance, strength and endurance. Research by the Climate Leadership Group found that a total of 30 minutes a day cycling to and from work five days a week can reduce the risk of heart disease and stroke by 23%, with further reductions in the risk of type 2 diabetes, depression and dementia.

Arnold Schwarzenegger believes that the most successful approach to cultivating climate-positive behavior is to frame it as a public health issue. As Governor of California, he found that traditional environmental messages had no impact against the messages pedaled by oil companies about protecting the economy, but when his campaign ran adverts about the harmful effects of air pollution on health, Californians voted for cleaner energy.

During a 2017 press conference, Schwarzenegger said, “Governors and Mayors have a duty to protect the health and safety of their citizens, and air pollution is one of the greatest threats to mankind.” He encourages the active commute, whether that be through cycling or walking, as a way to simultaneously improve public health and tackle climate change.

While Schwarzenegger’s appearance with Thunberg could be interpreted cynically, their casual bike ride may have done good work for both their causes. By publicly promoting the act of cycling in the context of their respective campaigns, they communicate the message that cycling could play a significant role in reducing climate change.