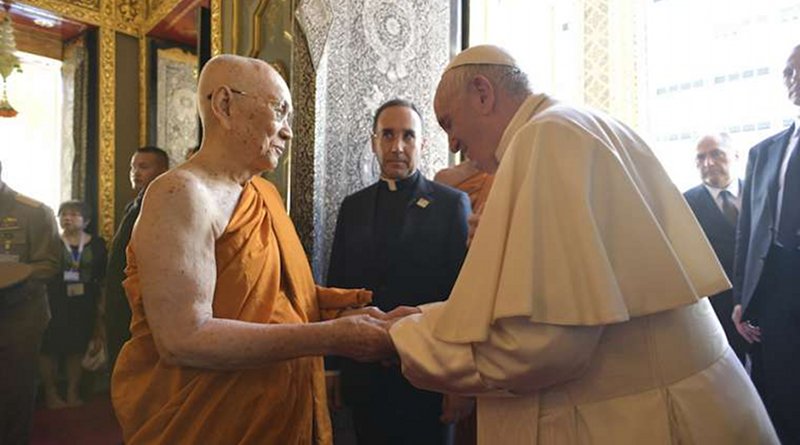 Catholics and Buddhists share should work together to advance the cause of mercy in the world, Pope Francis said Thursday during a historic meeting with the Supreme Buddhist Patriarch of Thailand.

“Thanks to scholarly exchanges, which lead to greater mutual understanding, as well as the exercise of contemplation, mercy and discernment – common to both our traditions – we can grow and live together as good ‘neighbors,’” the pope said Nov. 21.

When Catholics and Buddhists “have the opportunity to appreciate and esteem one another in spite of our differences, we offer a word of hope to the world, which can encourage and support those who increasingly suffer the harmful effects of conflict.”

Pope Francis met with His Holiness Somdej Phra Maga Muneewong at the Wat Ratchabophit Sathit Maha Simaram Temple in Bangkok, during a six-day Asian trip to Thailand and Japan.

The position has both spiritual and political significance in Thailand, and Muneewong’s appointment was not without some controversy, especially among monastic factions with Thai Buddhism. Before Muneewong was chosen for the role by the king, another Thai monk had the endorsement of senior monastic leaders in the country, but he was accused by the military of tax evasion before being officially selected. His supporters said that charge was trumped up, and opposed the selection of Muneewong.

The pope noted that Catholics and Buddhists can “contribute to the formation of a culture of compassion, fraternity and encounter, both here and in other parts of the world. I am sure that this journey will continue to bear fruit in abundance.”

Pope Francis’ visit to Thailand is intended to encourage the small Catholic community living in the Buddhist-majority country. The pope also has several interreligious meetings while in the country.

“On this path of mutual trust and fraternity, I wish to reiterate my personal commitment, and that of the whole Church, to furthering an open and respectful dialogue in the service of the peace and well-being of this people,” the pope said.

Francis noted that his visit follows in the footsteps of St. Pope John Paul II, who met the Supreme Buddhist Patriarch at the same temple in 1984.

St. Pope Paul VI was also visited by the Supreme Buddhist Patriarch at the Vatican almost 50 years ago, Francis said.

“Such small steps help testify that the culture of encounter is possible,” he stated, “not only within our communities but also in our world, so prone to creating and spreading conflict and exclusion.”

After giving prepared speeches, Pope Francis and the Supreme Patriarch had a brief informal conversation, in which they spoke about the value of fraternity between the two religions for promoting peace.

“If we are brothers, we can help world peace,” the poor, and the suffering, Pope Francis said, “because to help the poor is always a path of blessing.”

They also spoke about education and the role of missionaries in the country. Before leaving, the two exchanged blessings.