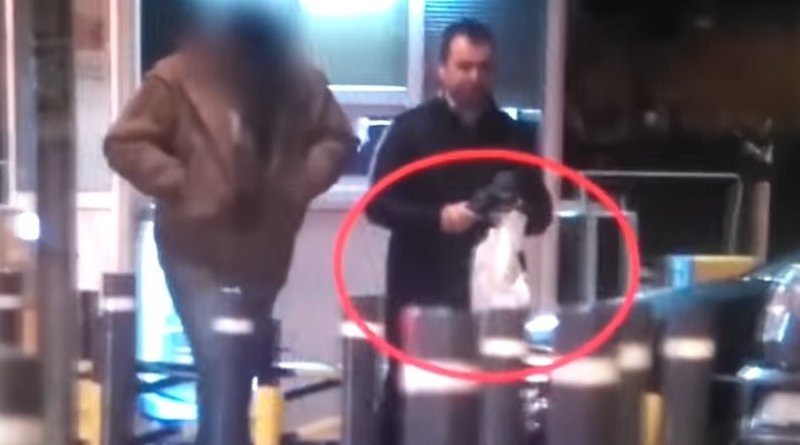 An image from the video. Photo: YouTube screen shot.

Serbia’s president will meet the Russian ambassador to Belgrade amid controversy sparked by the release of a video allegedly showing a Russian spy giving money to an unknown Serbian official.

Serbia’s Security Intelligence Agency told state broadcaster RTS on Wednesday that the video is genuine and that Kleban is a Russian intelligence officer.

Serbian Prime Minister Ana Brnabic told media earlier in the day that the authorities have ordered the Military Security Agency to examine the video.

“I spoke with President Vucic, he gave an order to the Military Security Agency to investigate the case. We do not have all the information yet, if everything turns out to be true, then it will be a serious issue and problem for us,” Brnabic told Blic newspaper on Wednesday.

She called the situation “a possible spy affair in which Russian spies recruit Serbian agents”.

The video was published on November 17 and is believed to be from a surveillance operation.

It shows two people exchanging bags in Belgrade, and ends with a person whose face is digitally obscured, but is described as a Serbian official, counting the money that he allegedly received.

The video was posted by a YouTube account named ‘Kdjuey Lskduf’ and described as “Russian Intelligence Officer Meeting Serbian Spy”.

A Gmail account under the same name previously sent the same video to Serbian media.

Serbian Defence Minister Aleksandar Vulin told Tanjug news agency that Vucic, as the country’s supreme commander, is gathering information from all intelligence and counterintelligence services, as well from the army.

“The situation is serious,” Vulin said.

Christo Grozev, a reporter for investigative journalism website Bellingcat, said that one of the people shown in the video is Russian deputy military attache Georgiy Kleban.

“Appears that – despite popular belief – some people in Serbian intel/law enforcement is not too happy with [Russian military intelligence service] GRU’s activities in Serbia,” Grozev wrote on Twitter.

He said he identified Kleban with Microsoft’s Azure face ML comparison tool and pictures published by the Serbian Foreign Ministry from events that Kleban attended.

The Russian embassy in Belgrade has not responded to questions sent by BIRN.

Radio Free Europe has reported that the Serbian Foreign Ministry said Kleban held the position of Assistant Defence Envoy at the Russian Embassy in Belgrade until June 2019.

Russia and Serbia historically have warm relations based on Slavic ethnic ties and common membership of the Orthodox Church.

Most Serbs view Moscow as one of their biggest allies, especially in the battle to prevent international recognition of the independence of the former province of Kosovo.

Russia was among the first countries to condemn Kosovo’s declaration of independence from Serbia in 2008, and it has since voted against the membership of Kosovo in international institutions in line with Belgrade’s policies.

In turn, Serbia has refused to join Western sanctions on Russia for its perceived role in fomenting conflict in Ukraine, despite reminders from Brussels stating that Serbia – as an EU candidate country – needs to align its foreign policy with that of the union.