(USGS) — In May 2008 a team of U.S. Geological Survey (USGS) scientists completed an appraisal of possible future additions to world oil and gas reserves from new field discoveries in the Arctic. This Circum-Arctic Resource Appraisal (CARA) evaluated the petroleum potential of all areas north of the Arctic Circle (66.56° north latitude); quantitative assessments were conducted in those geologic areas considered to have at least a 10-percent chance of one or more significant oil or gas accumulations.

For the purposes of the study, a significant accumulation contains recoverable volumes of at least 50 million barrels of oil and/or oil-equivalent natural gas. The study included only those resources believed to be recoverable using existing technology, but with the important assumptions for offshore areas that the resources would be recoverable even in the presence of permanent sea ice and oceanic water depth.

No economic considerations are included in these initial estimates; results are presented without reference to costs of exploration and development, which will be important in many of the assessed areas. So-called nonconventional resources, such as coal bed methane, gas hydrate, oil shale, and tar sand, were explicitly excluded from the study. Full details of the CARA study will be published later.

A number of onshore areas in Canada, Russia, and Alaska already have been explored for petroleum, resulting in the discovery of more than 400 oil and gas fields north of the Arctic Circle. These fields account for approximately 240 billion barrels (BBOE) of oil and oil-equivalent natural gas, which is almost 10 percent of the world’s known conventional petroleum resources (cumulative production and remaining proved reserves).

Nevertheless, most of the Arctic, especially offshore, is essentially unexplored with respect to petroleum.

A newly compiled map of Arctic sedimentary basins (Arthur Grantz and others, unpublished work) was used to define geologic provinces, each containing more than 3 km of sedimentary strata.

Because of the sparse seismic and drilling data in much of the Arctic, the usual tools and techniques used in USGS resource assessments, such as discovery process modeling, prospect delineation, and deposit simulation, were not generally applicable.

Therefore, the CARA relied on a probabilistic methodology of geological analysis and analog modeling.

A world analog database (Charpentier and others, 2008) was developed using the AUs defined in the USGS World Petroleum Assessment 2000 (USGS World Assessment Team, 2000).

PETROLEUM POTENTIAL OF ASSESSMENT UNITS AND PROVINCES IN THE CIRCUM-ARCTIC

In the Circum-Arctic Resource Appraisal (CARA), 33 provinces were examined, of which 25 were judged to have a 10-percent or greater probability of at least one significant undiscovered petroleum accumulation in any constituent assessment unit (AU) and were therefore quantitatively assessed.

Shown in these three maps are the relative probabilities for all assessment units assessed and the estimated relative potentials for undiscovered oil and gas in the assessed provinces.

The database includes areas that account for more than 95 percent of the world’s known oil and gas resources outside the United States.

For each assessment unit, the CARA team assessed the probability (AU probability) that a significant oil or gas accumulation was present.

This evaluation of AU probability was based on three geologic elements: (1) charge (including source rocks and thermal maturity), (2) rocks (including reservoirs, traps, and seals), and (3) timing (including the relative ages of migration and trap formation, as well as preservation). Each assessment unit was ranked according to its AU probability; those AUs judged to have less than a 10-percent probability of a significant accumulation were not quantitatively assessed.

In addition to the AU probability, the number of accumulations, the size-frequency distribution of accumulations, and the relative likelihood of oil versus gas were assessed for each AU and combined by means of a Monte Carlo simulation.

The probabilistic results reflect the wide range of uncertainty inherent in frontier geological provinces such as those of the Arctic.

Within the area of the CARA, 25 provinces were quantitatively assessed; 8 provinces were judged to have less than a 10-percent probability of at least one significant accumulation in any AU and were, therefore, not assessed.

Results of individual AU assessments are not reported here, but the AUs are shown as mapped areas on Figure 1, where they are color-coded for the probability of at least one undiscovered accumulation of minimum size.

The provinces are shown in Figures 2 and 3, where they have been color-coded with respect to fully risked (including AU probabilities) potential for gas and oil, respectively.

It is further estimated that approximately 84 percent of the undiscovered oil and gas occurs offshore. 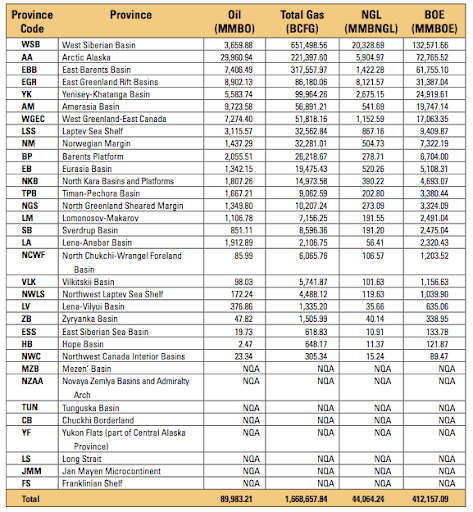 This entire report and graphics was published by the U.S. Geological Survey  (USGS) and may be accessed here (PDF).