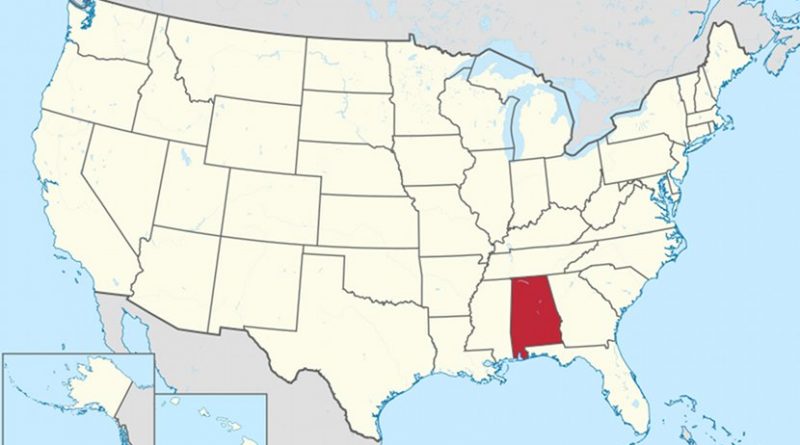 Location of Alabama in the United States. Source: Wikipedia Commons.

The electoral process has changed very little for black people. At this late date in history our highest political expectations still amount to little more than keeping hardcore racists out of office. Any other victories are negligible. Even when we win we still lose.

All Americans live in a political world constrained by control of one far right party and one center right party. The system creates a lack of choice and yet we are constantly told that small electoral changes are fraught with great meaning.

Such was the case in Alabama where a Democrat unexpectedly prevailed in a special election for the U.S. Senate. Alabama is a lynchpin of the now 50-year old southern strategy, which switched the party of white racism from the Democrats to the Republicans. The Republicans should have won easily but instead they lost by the closest of margins.

Instead of choosing a bland, safe candidate they decided to nominate racist, red meat firebrand Roy Moore. Moore was a caricature of the far right where one was not needed. Not only did he speak of the era of enslavement as a time when America was great, but he was also revealed to be a serial molester of under age girls. Black Alabamans were highly motivated to get out the vote, enough whites were demotivated and Democrat Doug Jones won in a squeaker.

The lingering trauma of Donald Trump’s victory created a state of surreal ecstasy for Democrats after the Alabama election. The failing Democrats have managed to lose control of most state legislatures, both houses of Congress and the presidency but now they act as though they have found the magic key to victory because they got lucky in one red state.

Of course Jones won because of the black vote, but that is the case in elections throughout the country. Republicans deliberately gerrymander for the express purpose of creating districts free of black voters and ensuring victories for themselves.

It was somewhat amusing to watch white liberals expressing deep gratitude to black people. The newfound respect and devotion doesn’t amount to much because they don’t understand why their party has failed so badly. But in a period of a few days Jones revealed why that is the case.

He immediately announced that he might “Vote with Republicans on some issues.” The great white hope for Democrats went further. He wouldn’t denounce the Republicans new tax plan. He would only say that he favors tax cuts for middle class people but also for corporations. This plan will create a huge give away to the richest people and begin the right wing dream of dismantling the federal government by defunding it.

Jones perfectly exemplifies the two-party trap. No one should have been shocked by his traitorous words. But most of his voters probably understood that they had a very bad choice on their hands. The black people who marshaled themselves around a Jones win live in greatest fear of rule by the segregationists. Having another two-faced Democrat in the Senate isn’t as dangerous to them as living in a world run by the Trumps and Moores of the world. Moore was an existential threat, a clear and present danger that they could not dismiss.

The Jones victory will not end mass incarceration or bring living wage jobs to his state or stop police murder or do any of the things that black people need to have done. Black Alabamans are themselves aware of this conundrum that caused them to wage a fight that gained them very little.

But Jones didn’t arrive at his polling place on horseback as Moore did. That seemingly silly gesture was lost on no one. The overseer/slave patroller image is just what Moore intended to convey to his people. Black voters saw clearly, too, but reached a very different conclusion. The ancestral memory elicited by overseer Moore was just one more source of encouragement for any fence sitters on Election Day.

Donald Trump has brought the reality of black voters into stark relief. He epitomizes everything we have fought against and yet the people we look to for salvation won’t lift a finger on our behalf. Old school hatred or useless corporate Democrats. The year 2017 ends as it began with the political vicious cycle very much in place and black people are still the losers.