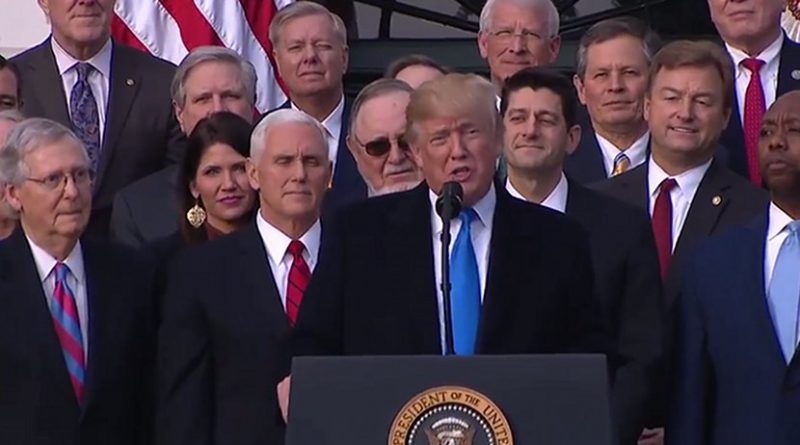 U.S. President Donald Trump and his Republican supporters in Congress are celebrating the passage of a U.S. tax overhaul, the first major legislative victory of Trump’s presidency.

“We are making America great again,” Trump told a crowd gathered on the lawn of the White House on Wednesday. He praised by name the lawmakers who supported the bill, including Senate Majority Leader Mitch McConnell, House Speaker Paul Ryan, Vice President Mike Pence, and others.

“It’s the largest tax cut in our history. … Really something special,” Trump said. He said he and Republican lawmakers had “a lot of fun” putting the legislation together. “It’s always fun when you win, isn’t it?” he said.

Senate Majority Leader Mitch McConnell took the microphone to say, “This has been a year of extraordinary accomplishment for the Trump administration.”

Backers of the bill said American taxpayers will see a difference in their paychecks in early 2018.

The Tax Cuts and Jobs Act passed both the House of Representatives and the Senate with overwhelming Republican backing and unified Democratic opposition. After a technical House vote Wednesday, the bill went to the White House.

Democrats slammed the legislation as mortgaging America’s future at home and abroad in order to pad the pockets of the wealthy.

“Yet again, Republicans showed their only priority is to give the richest few a bigger piece of the pie,” Senate minority Leader Chuck Schumer, a New York Democrat, tweeted. “I believe the entire Republican Party will come to rue the day they voted for the #GOPTaxScam.”

“We are challenged by 16 years of war, which we have made no attempt to pay for, and [with this bill] we are putting our national security behind benefits for the wealthiest Americans,” said the ranking Democrat on the Senate Armed Services Committee, Jack Reed of Rhode Island.

By contrast, Republicans jubilantly argued the tax cuts will rev up the economy and make American businesses more competitive at home and abroad.

“Our tax code has hampered job creation, wage growth, investment in the United States, and has chased American companies to foreign shores. I don’t know how it could be more harmful,” Senate Finance Committee Chairman Orrin Hatch of Utah said. “The bill before us will address these problems and help us turn the ship around.”

The nonpartisan Tax Policy Center concluded the bill would cut taxes for 95 percent of Americans next year, but average cuts for top earners would greatly exceed reductions for people earning less.

Despite the center’s analysis and Republican attempts to discredit the findings, a series of new polls shows many Americans do not believe the measure will provide tax relief. An NBC-Wall Street Journal poll found that 37 percent of Americans believe the middle class will pay more. And a Monmouth University survey said half of the U.S. population predicts their federal taxes will increase.

A White House official dismissed the polls, saying, “We know the truth will set us free when it comes to that particular issue.”

The legislation also partially repeals former president Barack Obama’s signature health care law, eliminating the requirement that Americans purchase health care insurance. As a result, some 13 million fewer Americans would be insured over the next decade, according to the Congressional Budget Office.

Some Democrats noted that the president, a real estate mogul, could benefit greatly from certain provisions in the bill. Trump has maintained the change in tax law would cost him money.