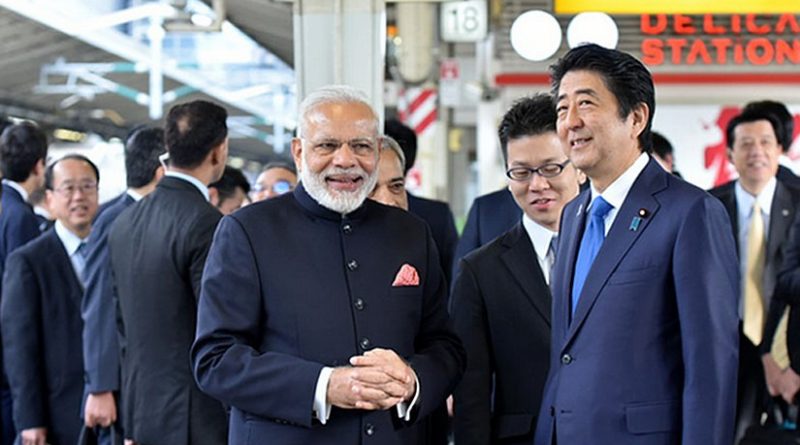 The Japanese are known for their ethnocentric mindset. This gives an opportunity to them for a quick collective decision, even in a strong democratic pattern of society. The sudden about-turn of Japan for not joining RCEP without India is a case in point. Observers believed the twist was the outcome of 2nd India- Japan 2+2 Foreign and Defence Ministerial Meeting in New Delhi on November 30, 2019. It stemmed from Japan’s balancing  between trade benefits and outreach in political  security in Indo-Pacific Region.

It puzzled the whole world and put Indian negotiators in confusion. The observers were agog as what made Japan dragging  its feet . Even in the last round of negotiation in Vietnam, not a slightest indication was made by Japan when India was dilly-dally in joining the block.

Both sides exchanged views on the new look to Indo-Pacific Region and their respective roles from the perspectives of India’s Act East Asia Policy and Japan’s “ Free and Open  Indo-Pacific Vision”. This reflected a spur in relation between the two countries to increase influence in the region.

So far,  the cooperation between India and Japan was driven by bilateral issues, limited to economic matters. Both have historical hostility with China. India had to counter a military  war with China in 1961 relating to border disputes. Japan has historical feud with China owing to Japan’s atrocity in pre –War and maritime disputes.

After holding  the 2nd India- Japan 2+2 dialogue, which seemed to be  more  effective,   two sides provided opportunities to give strong spine to India- Japan special strategic and global partnership in the political security.

Factors attributing to Japan about-turn to RCEP were India’s increasing significance in Indian Ocean – a major part of Indo-Pacific Region – and Japan’s overarching  Africa for better market accessibility with the help of India’s strong footprint in the continent.

After Indian Prime Minister Narendra Modi became  assertive for India’s role  in East Asia , upgrading the campaign and policy strategies from “Look East” to “Act East Asia”, India and Japan became ambitious to be major powers to counter China , which was fast a growing influence in East Asia , such as SouthChina Sea and South East Asia through BRI ( Belt and Road Initiative), according to Director of the Centre for Indian Studies at China West Normal University , Long Xingchun. The rise of China becomes a big concern for India and Japan and that become vital for the two countries to come together, according to the Chinese Director.

China viewed the  new closeness between India and Japan an imperative to counter China. This is because, It believes that it is almost impossible for both countries to confront China individually after China reached super power both in terms of economy and defence.  When initially RCEP was proposed to be formed, it had 13 countries, including ASEAN 10 and China, S. Korea and Japan. India was  not included . It was Japan, who insisted to include India , with Australia and New Zealand.

In fact, China was reluctant to include India initially, presumably portending hard bargain and counter from India. The situation changed with Trumps’ culmination of trade war with China. China is export base  economy  and USA is the biggest destination for China’s exports. With the loss of trade opportunities to USA , which has already inflicted China’s GDP growth, trade war  forced China to make a volta face to India in search for  a big market.

In addition, having an eye in Africa market, India –Japan clinged cooperation for Asia-Africa Growth Corridor ( AAGC) to counter China.

RCEP is not merely a trade block. More than this, it is portended a political platform where China will have more muscles to influence in Indo-Pacific Region through trade supremacy.

Moreover, it is not ensured that Japan will gain from trade expansion in the RCEP, given the present trend of trade relation with the block . Japan is already reeling under trade deficit with the block. The main factor attributing to it is China. China’s accounted for 41.5 percent of trade deficit between Japan and RCEP nations. It is suspected that RCEP may widen  the trade deficit and  dampen Japan’s overall trade surplus  with the world, had Japan join the block.  For example, in 2018, RCEP accounted for 46.3 percent of Japan’s export and 49.7 percent of Japan’s imports. This means RCEP will play a key role in Japan’s trade , inching towards narrowing its trade surplus. This calls for an warning bell for Japanese trade , if it joins RCEP .

Against this backdrop, India would have posed an insulation for Japan, had it join RCEP. Given the second biggest market in the block , Japan could expand its exports to India after availing the tariff benefits. India and Japan has bilateral FTA. But, that could not unleash any major impact on Japan’s export to India. RCEP would have been boon as because it could open multiple doors for Japanese subsidiaries in the block to export to India through the channel of GVC , the new concept expected to set off in Make in India initiative.

In summing up, Japanese about-turn to RCEP and reposing confidence on India demonstrate a major transformation  in India- Japan relation from bilateral economy issues to political dynamism from the perspectives of global partnership.