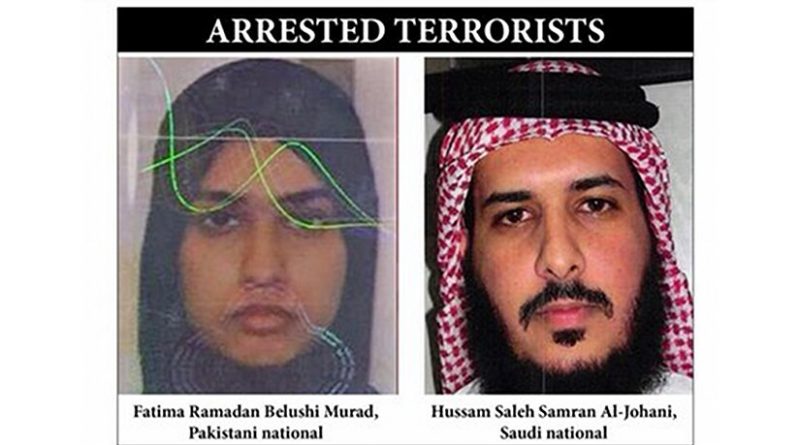 Two dangerous terrorists were killed and another two arrested in dramatic security operations in Jeddah on Saturday.

After a pre-emptive operation by security forces two terrorists in Al-Harazat District, in south east Jeddah, were killed after they blew themselves up after refusing to surrender to police calls, the Interior Minisry’s spokesperson said.

He added that the authorities arrested another two, a husband and his wife, in the Naseem District.

Security sources told Arab News that the security authorities got information on the presence of a group of terrorists at a house in Al-Harazat District. After an investigation, the residents of the house turned out to have a link to another terrorist living in Naseem District, who used to come to the house together with his wife.

The person also turned out to be a former terrorist who was imprisoned for eight years but released after less than two years. He was the one who rented the house in Al-Harazat at least two months ago, to be used as a hideout for the terrorist cell; he used his wife in an attempt to avoid the landlord and neighbors becoming suspicious.

The security forces cordoned off the two hideouts and arrested the first person, a Saudi citizen with his Pakistani wife, 19, in their apartment in Naseem District. After searching the house, the security forces found a ready-to-use explosive belt, a locally-made bomb, together with a machine gun with live ammunition.

Eyewitness told Arab News that the security forces cordoned off the district during Fajr prayer time, and banned citizens from approaching the location for their own safety. They said the shootout with the security men continued for a long period of time, until the big explosion that shook neighboring houses.

After the incident, the security men were greeted with an enormous welcome and applause from the citizens of the district, the eyewitnesses said.

The security spokesman of the Ministry of Interior, Maj-Gen. Mansour Al-Turki, said the hideout at Al-Harazat was used as a lab for making explosive belts and bombs.

He said the man arrested at the second hideout, in Naseem District, was linked to those in the Al-Harazat property. His name is Husam bin Salic bin Samran Al-Juhani, a Saudi citizen, and claimed the Pakistani women, Fatma Ramadan Balushi Ali Marada, was his wife. In the apartment, the security men found a machine gun, a bag primed with explosives and other items.

Security authorities are still collecting evidence from the two locations and conducting investigations with the arrested persons. All details and identities of the terrorists will be announced later, Al-Turki said.