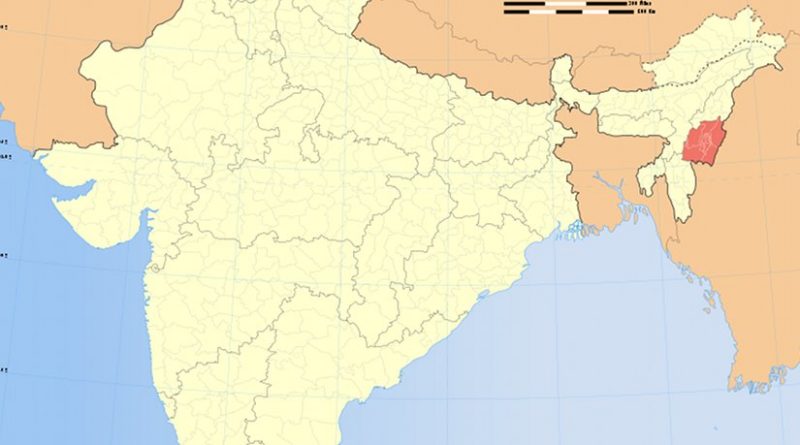 On January 15, 2019, at least 10 persons were wounded in a clash between protesters and Police at Khwairamband Keithel in Imphal West District. The clash occurred when people protesting against the Citizenship (Amendment) Bill, 2019, [first introduced as the Citizenship (Amendment) Bill 2016, and passed on in the Lok Sabha (Lower House of Indian Parliament) on January 8, 2019, following the submission of a Joint Parliamentary Committee report on January 7, 2019] were heading towards Raj Bhavan (the official residence of the State’s Governor).

On January 14, 2019, four persons, including two women, were injured during a Police crackdown in Imphal, the State capital, on protesters demanding scrapping of the Citizenship (Amendment) Bill.

Manipur has been witnessing sporadic protests since January 8, 2019, when the Lok Sabha passed the contentious Bill. According to media reports, the Bill was supposed to be tabled in the Rajya Sabha (Upper House of Indian Parliament) on January 9, 2019, but was deferred. There is speculation that the Bill might be tabled during the Budget session starting from January 31, 2019.

Following the passage of the Bill in the Lok Sabha, the Manipur Government in a Press Release on January 10, 2019, stated that the State Cabinet reviewed the situation prevailing in the State after passing of the Bill. The Cabinet “decided to urge the Union Government and concerned authority to give assent to the Manipur People’s (Protection) Bill, 2018.” It also “decided to urge the Centre for exemption of Manipur from the jurisdiction of the Citizenship Amendment Bill.” The press release further stated,

The Manipur People’s (Protection) Bill, 2018, was passed in the State Assembly to regulate entry and exit of non-Manipuris from outside the State. According to partial data compiled by South Asia Terrorism Portal, 201 persons have been detained for suspect nationality in the State in the year 2018. No further information regarding the status of these detainees is available.

These initial murmurs against the Citizenship (Amendment) Bill, need, to be carefully considered by the Governments – Centre and State, as they have the potential to reignite simmering ethnic sentiments and conflicts across the State.

Meanwhile, insurgency-linked violence in Manipur has ebbed considerably in recent times, but maintains cyclic trends. According to partial data compiled by the Institute for Conflict Management (ICM), 23 fatalities [seven civilians, seven Security Force (SF) personnel, and nine militants) were recorded in the State in 2018. Through 2017, the State recorded 55 fatalities (23 civilians, nine SF personnel, and 23 militants). Overall fatalities thus witnessed a decline of approximately 58.1 per cent in 2018 as compared to 2017. No such fatality has been recorded in the State in the current year, thus far (data till January 20, 2019). Overall fatalities in the State were the lowest in 2018, since 1992. A previous low of 33 was recorded in 2016. At the peak of insurgent violence in 1997, the State registered 495 fatalities.

The six Hill Districts (dominated mainly by Naga and Kuki tribes) accounted for 69.56 per cent of total insurgency-linked fatalities (16 out of 23) in 2018. There were no fatalities in the remaining four Hill Districts (Senapati, Pherzawl, Ukhrul and Tamenglong). Manipur currently has a total of 10 Hill Districts: Chandel, Tamenglong, Senapati, Ukhrul, Pherzawl, Noney, Tegnoupal, Kangpokpi, Kamjong and Churachandpur. Significantly, five of the current 10 Hill Districts are along the porous and volatile Indo-Myanmar border, increasing their vulnerability. Two Valley Districts (Imphal West and Thoubal) registered the remaining 30.43 per cent of fatalities (seven of 23) in 2018.

Incidents of fratricidal killings by insurgents also recorded a decline. Six militants died in six such incidents in 2018 as against 19 such fatalities in 10 incidents in 2017.

Meanwhile, the SF drive against militants in the State led to the arrest of 172 militants in 2018, adding to 177 arrested in 2017. In one of the prominent incidents, the National Investigation Agency (NIA) arrested the ‘chairman’ of the Kuki Revolutionary Army (KRA), David Hangshing, on August 25, 2018, in connection with the a case of missing arms from the Police armoury.

Several areas of concern, nevertheless, persist. 24 persons (in 12 incidents) were abducted in 2018 as against 23 (in 13 incidents) in 2017, according to partial data compiled by SATP. SFs rescued 12 persons, another nine were released, while the whereabouts of the remaining three are not known. Incidents of abduction and extortion are grossly underreported. Continued incidents of abduction-for-ransom clearly demonstrate that militants still have significant presence.

The porous Indo-Myanmar border facilitates militant movement. Active militant formations have moved their camps further inside Myanmar following the cross-border raids in June 2015. An unnamed Indian Army officer, on the condition of anonymity, stated, in November 2018, “Insurgent groups have moved deeper into Myanmar” following the strikes.

Apart from the escalating troubles related to the Citizenship (Amendment) Bill, the persistent ethnic conflict in the State is far from being resolved. The demands of the Hill-based outfits run contrary to those of the majority sentiment of the Valley residents. The initial demand of the Kuki militant conglomerates for a separate State remains unacceptable to the State Government (both the previous Ibobi Singh-led regime and the present one led by N. Biren Singh) reflecting sentiments amongst Valley inhabitants. Thus, Chief Minister N. Biren Singh declared, on February 21, 2018, “We will not accept any demand for creation of a Kuki State. The peace process was initiated by the Centre. The State Government has not been a part of the talks between the Kuki groups and the Centre. The peace pact was signed after the groups had assured that they would not raise the demand for statehood.”

The Naga Framework Accord and its possible implication on Manipur’s territorial integrity continue to raise suspicions in the Valley Districts. The submission of a report by the Parliamentary Standing Committee on the framework agreement in July 2018, once again, raised alarm. In the report, the Government’s interlocutor for Naga talks, R.N. Ravi, had said that a “special status” would be offered to the Naga people by extending Article 371 (A) to Naga-inhabited areas.

On July 16, 2018, Chief Minister N. Biren Singh, however, warned, “If our voice is not heard, if the consent of the State Assembly or of the people is not taken, then we will have difficulties. Then we will have to leave our posts.” Less than a month later, on August 10, 2018, eight Imphal Valley-based civil society organisations enforced a half-day shutdown of shops, business establishments, and marketplaces in the city, and also in Uripok, Sagolband and Thangmeiband in Imphal. Jeetendra Ningomba, vice president of the Committee of Civil Societies Kangleipak (CCSK), one of the civil societies enforcing the shutdown, stated, “If the article [371A] is applied in the Naga-inhabited areas of Manipur, the State Government would have no right to interfere. This is an indirect submission to the demand for greater Nagaland.”

Further, the Suspension of Operations (SoO) with the Kuki militant conglomerates Kuki National Organisation (KNO) and the United People’s Front (UPF), was extended on September 2018. The SoO Agreement now will be valid till August 31, 2019. The talks with the group, according to news reports, remain at a preliminary stage. KNO ‘president’ P.S. Haokip disclosed, on September 13, 2018, that substantive talks were yet to begin and the groups’ principal demand for a “territorial council” will be placed before the Government whenever the next round of talks are held.

The presence of militants of the SoO groups living outside designated camps is also a cause for concern. An unnamed Indian Army official thus noted, “There are an estimated 200-250 active insurgents in the State outside the camps monitored as part of the SoO.”

Moreover, the issue of the politico-administrative status of the Hill Districts remained unresolved since the creation of new Districts. The 10th round of the tripartite talks between the Centre, State Government, and United Naga Council (UNC), held at the Senapati District headquarters town on September 1, 2018, remained inconclusive. According to news reports, the State Government made a request for more time, during the tripartite talks, to come up with concrete proposals regarding the UNC’s demand for a roll-back of the decision Notification of District creation] of the previous Ibobi Singh-led State Government to create seven new Districts in the State in 2016.

In November 2018, General Officer Commanding of the 57 Mountain Division, Major General V.K. Mishra observed, “The presence of so many groups adds to the complexity… Given the complexity of the problem, it may take longer to achieve a solution”.  The 57 Mountain Division of the Indian Army, based in Leimakhong, is involved in counter-insurgency operations in the State.

Nevertheless, the relative peace over the years has opened up spaces for development work. A slew of projects, totalling INR 15 billion, were inaugurated by Prime Minister Narendra Modi on January 4, 2019. The projects include an Integrated Check Post (ICP) at Moreh in Tengnoupal District near the Indo-Myanmar border; the Dolaithabi barrage in Kangpokpi District; a Food Corporation of India (FCI) storage godown in Imphal East District; a buffer water reservoir at Shirui village in Ukhrul District; upgraded water supply for Churachandpur (zone-III) in Churachandpur District; an eco-tourism complex at Thangal Surung in Kangpokpi District; an integrated tourist destination at Tupul in Noney District; and the water supply scheme at Jawahar Navodaya Vidyalaya located in Lambui in Ukhrul District. Prime Minister Modi also dedicated a 400kV double-circuit Silchar-Imphal power transmission line to the nation.

The qualified peace achieved in the State needs to be carefully nurtured, as emotive issues related to land and identity are involved in the many latent and low grade conflicts that exist in Manipur. The passage of Citizenship (Amendment) Bill in the Lok Sabha is an unwise move that threatens the fragile equilibrium that has been established in the State after decades of violent armed conflict and political turmoil. It remains to be seen whether the current regime at the Centre has the sagacity to bring reason back into its calculus, or persists in its short-term electoral politics of communal polarization, which appears to be the principal motive behind the Citizenship Amendment Bill.