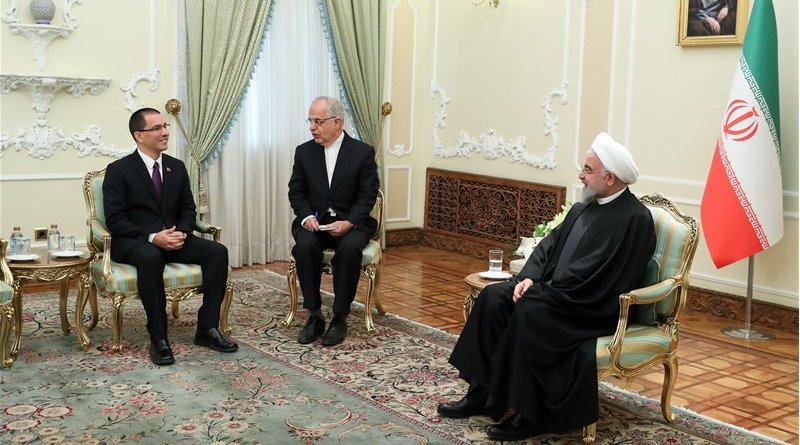 Speaking at a Tuesday meeting with Venezuelan Foreign Minister Jorge Arreaza, Rouhani pointed to the US government’s illegal sanctions against the Iranian nation and its pressure and conspiracies against the Venezuelan government and nation, describing the US moves as “crimes against humanity”.

“There is no doubt that independent nations will resist these pressures and conspiracies and the resistant nations will definitely emerge victorious and make the US regret (its moves),” he added.

“The current US government is acting against both sovereign nations and its own people, and today it has become the enforcer of the Zionist Regime’s policies in the world,” the president stressed.

Arreaza, for his part, offered his condolences to the Iranian people and government over the martyrdom of Lieutenant General Qassem Soleimani.

He also said that independent nations will undoubtedly defend their interests in the face of the enemies’ pressures and conspiracies.

General Soleimani, the commander of Iran’s Islamic Revolution Guards Corps Quds Force, Abu Mahdi al-Muhandis, who was the deputy head of Iraq’s Hashd al-Sha’abi (PMU), and a number of their entourage were killed in a strike by American drones near Baghdad International Airport on Friday, January 3.

The White House and the Pentagon claimed responsibility for the assassination of General Soleimani in Iraq, saying the attack was carried out at the direction of US President Donald Trump.

In the early hours of Wednesday, January 8, the IRGC targeted the US airbase of Ain al-Assad in retaliation for the US move.