(EIA) — The increase in U.S. petroleum product exports has garnered significant attention lately, as U.S. Energy Information Administration (EIA) data showed the United States was a net exporter of petroleum products (petroleum and other liquids, excluding crude oil) for the first time since at least 1949. The rise in U.S. product exports at a time of rising domestic product prices has led some to ask if higher gasoline exports might be causing higher gasoline prices. However, the available evidence does not support such a linkage.

Increased product exports have allowed Gulf Coast refiners an outlet for their production, which may have been reduced without this outlet. With the summer driving season approaching, this edition of TWIP will focus on gasoline exports. In 2011, total gasoline exports only comprised 18 percent of total U.S. petroleum product exports. However, they have been a growing share of total petroleum product exports since 2007 when their share was just 10 percent. The United States exported more than 500,000 barrels per day (bbl/d) of gasoline in 2011; this level represents a 57 percent increase compared to 2010, and a 266 percent increase compared to 2007. These increasing gasoline exports have been a response both to weak domestic demand and coproduction of gasoline spurred by strong global demand for distillate fuels. 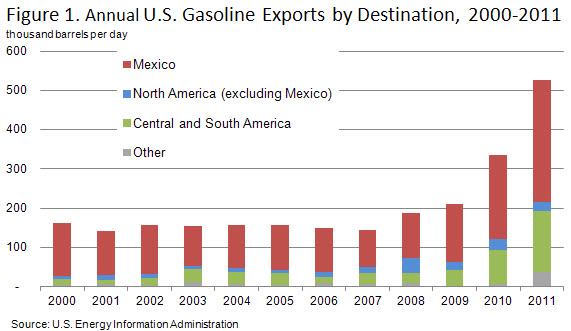 In terms of gasoline, the United States remained a net importer for 2011 as a whole; however, on a monthly basis, it was a small net exporter by the end of the year. In addition to gasoline exports, the United States exported about 850,000 bbl/d of distillate fuel in 2011. With distillate crack spreads regularly exceeding those for gasoline in recent years, refiners have tried to maximize distillate production to capture this value. In doing so, they have also produced more gasoline. Thus, excess gasoline in Gulf Coast markets has been partly the result of refiners responding to distillate crack spreads.

Most of the U.S. exports for distillate and gasoline come from the Gulf Coast. Gulf Coast excess capacity has resulted from both declining demand (preliminary data for 2011 show gasoline consumption 550,000 bbl/d, or 6 percent, lower than 2007) and increasing capacity, such as the recent expansion at Marathon’s Garyville refinery in Louisiana. In addition, Gulf Coast refineries have a competitive advantage in some world markets. The Gulf Coast refining complex as a whole is very sophisticated. Refiners there have invested significantly in bottoms upgrading capacity and can thus run relatively cheaper crude oils. Moreover, they use natural gas for their fuel, which at current prices is an advantage compared to refineries fueled by petroleum. Gulf Coast refineries also have good water access and a location that allows for a relatively short-haul voyage to the growing Latin American markets.

Gasoline statistics at the national level can mask substantial geographic market variations for this product. Historically, the U.S. market has relied extensively on gasoline imports for supply. This has been especially true on the East Coast which has been the destination of about 85 percent of total U.S. gasoline imports. U.S. suppliers on the East Coast see imports as an economic way to meet domestic market needs. East Coast markets can be supplied by imports from areas such as Europe, where a relative over-supply of gasoline means wholesale prices there tend to be low. This creates a fairly consistent incentive to pull gasoline from Europe to New York Harbor.

So why do Gulf Coast refineries export product rather than send more to the East Coast, especially the Northeast, which receives much gasoline import volumes? Both pipeline capacity and domestic waterborne shipping constraints currently discourage increased volumes from traveling from the Gulf Coast to the East Coast. As long as European and other gasoline supplies remain competitive, the East Coast will continue to draw on these supplies. Additionally, expanded Midwest refining capacity is backing out requirements to ship products from the Gulf Coast north to that area.

Growth in U.S. gasoline exports does not itself translate into higher prices for U.S. consumers. Rather, export markets are providing an outlet for refiners who would otherwise have faced margins that incentivized run cuts, or possibly even shutdowns, as decreased domestic demand had created excess refining capacity.

The continuation of this export trend is by no means assured over the long term. Given most of the U.S. export growth has been to Latin America, if demand in that region slows, or if refining capacity in those countries is built to meet demand growth, fewer petroleum products could flow south in the future. Continued gasoline exports also depend on what happens domestically. If constraints to moving more gasoline from the Gulf Coast to the Northeast are relieved, the most economically efficient destination for Gulf Coast gasoline could be the Northeast, rather than abroad.

This is the last data collection for the 2011-2012 State Heating Oil and Propane Prices (SHOPP) season. The start date for the next heating season will be on October 1, 2012.