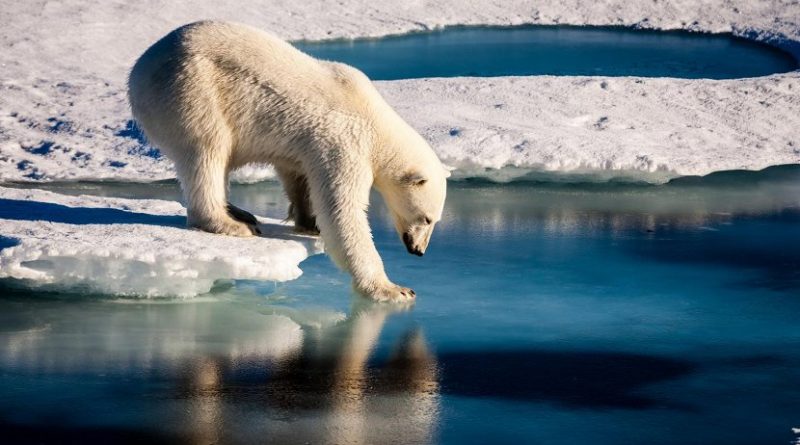 A major shift in western Arctic wind patterns occurred throughout the winter of 2017 and the resulting changes in sea ice movement are possible indicators of a changing climate, says Kent Moore, a professor of physics at the University of Toronto Mississauga.

Thanks to data collected by buoys dropped from aircraft onto the Arctic Ocean’s sea ice, Moore and colleagues at the University of Washington, where he spent the year as the Fulbright Visiting Chair in Arctic Studies, were able to observe this marked, anomalous shift in Arctic wind patterns and sea ice movement during the winter of 2017.

Their study is published in Geophysical Research Letters.

Usually, the western Arctic has relatively stable weather during the winter; it is home to a quasi-stationary region of high pressure known as the Beaufort High, which promotes “anti-cyclonic” winds that travel in a clockwise direction and move sea ice along with it. By contrast, the eastern Arctic has a more dynamic climate where cyclones are a common winter phenomenon with storms moving from Greenland towards Norway and the Barents Sea.

“Last year, we looked at the buoy tracks in the western Arctic and saw that the sea ice was moving in a counter-clockwise pattern instead and wondered why,” Moore said. “We discovered that storms were moving in an unexpected direction from the Barents Sea along the Siberian coast and into the western Arctic, bringing with them low-pressures that caused the collapse of the Beaufort High.”

Moore and colleagues believe that the low-pressure systems were able to make inroads into the western Arctic because of an unusually warm fall in 2016 resulting in thinner and less extensive sea ice. During the winter, this allowed for more oceanic heat to be transferred to the atmosphere and provided an additional energy source for these storms.

“As a result of this additional energy source, the storms did not dissipate over the Barents Sea, as is usual, and were able to reach into the western Arctic,” Moore said. “We reviewed more than 60 years of weather data from the Arctic and it appears that this collapse has never happened before.”

Generally, the Beaufort High drives sea ice motion throughout the Arctic as well as impacting ocean circulation over the North Atlantic Ocean. Any shift in movement patterns has the potential to affect the climate in these regions, as well as the Arctic ecosystem that depends on predictable areas of open water and ice.

For example, as a result of this collapse, sea ice was thinner along the coast of the Canadian Arctic Archipelago, as well as in the southern Beaufort Sea last winter. Such changes can disturb Arctic food webs, stressing marine mammals and polar bears, especially if they are ongoing.

“If this becomes part of the normal pattern – even if it happens every few years – it will mean that the climate is changing,” Moore said. “We are still exploring all of the specific impacts.”