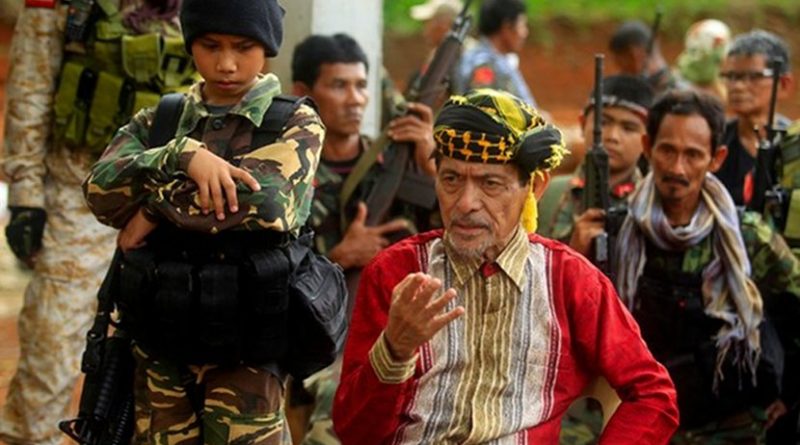 Moro National Liberation Front leader Nur Misuari (center) speaks to reporters while under heavy security in his mountainous base on the southern Philippine island of Jolo, May 29, 2016. Mark Navales/BenarNews

B Jeoffrey Maitem and Mark Navales

Former Muslim guerrilla leader Nur Misuari threatened to go to war again if the Philippines does not change its system of government to federalism rather than the current presidential form, officials said Thursday.

President Rodrigo Duterte told a political party rally in Marikina, a suburb of Manila, that Misuari issued the threat during their meeting Tuesday at the presidential palace in the nation’s capital. He said Misuari emphasized that Muslim rebels had been seeking a federal form of government.

“Misuari told me last night, ‘If you do not give it to me, let me be very honest, I will go to war,’” Duterte said Wednesday.

“I told him, ‘I understand that, Nur, so this is what we will do: Let’s form a panel because we have to inform the people. We cannot negotiate secretly,” Duterte said, according to transcripts distributed to reporters by the presidential palace.

Presidential spokesman Salvador Panelo on Thursday said the government was prepared to fight back, but emphasized that he believed it would not reach that point.

He said Duterte made a subtle “counter-threat” to Misuari by replying, “We will die fighting each other.”

“It means he is ready to fight,” Panelo said, referring to Duterte. “That’s what the president meant – if you fight the government, I will fight back.”

He said Duterte suggested that the two parties create their respective five-member panels to tackle the proposed shift to federalism.

Six years ago, Misuari led dozens of his followers in taking over the southern city of Zamboanga. Three weeks of clashes with security forces killed 223 people, most of them MNLF fighters. Thousands of homes were burned and Misuari went on the lam.

In 2016, Duterte ordered the dropping of charges against Misuari related to the Zamboanga siege, as the president worked on the Bangsamoro Organic Law (BOL), which paved the way for the creation of the Bangsamoro Autonomous Region in Muslim Mindanao (BARMM).

Senators: What kind of federalism?

Meanwhile, senators slammed Misuari’s threats, warning that he could potentially face sedition or rebellion charges by issuing such remarks.

“I wonder if there’s a law against threatening the government. Second, does he even know what kind of federalism he wants? It’s not that easy. We need to study that,” Sen. Vicente Sotto told reporters.

“I hope that he does not violate any laws by inciting to sedition, inciting to rebellion or what have you,” Sotto said.

Duterte had earlier said he would back a change in government, but said the debate should go through Congress. He had argued that shifting to a parliamentary form of government would allow the decentralization of wealth and spread growth to the countryside.

The proposal, however, has not taken off the ground, and has been met with strong opposition from politicians wary of tinkering with the Constitution.